"They don't have a goddamn clue what they're talking about but we are not going to let them destroy this city," Police Commissioner Dermot Shea said during a CompStat briefing on Thursday. "People that don't have a clue about how to keep New Yorkers safe suddenly think they know about policing."The police commissioner did not name any specific lawmakers in his speech at the CompStat briefing, a weekly meeting of department leaders and top commanders.CNN reached out to New York Mayor Bill de Blasio's office and the NYPD for comment on the seven-minute video. Julia Arredondo, a spokeswoman for de Blasio, said Saturday the mayor and Shea remain working partners."As shown in their hour-long press conference together on Friday, the mayor and commissioner are closely working together to beat back crime," Arredondo said.The day after his fiery speech, Shea appeared with de Blasio at the mayor's daily press briefing, where the pair rolled out a citywide violence prevention plan that included redeploying assets to areas heavily affected by gun violence. The speech from Shea comes as the city is dealing with an uptick in shootings and homicides that it hasn't seen in nearly two decades. Through July 12, the city has recorded 634 shootings compared to 394 for the same period last year, a 60% increase. There have been 203 murders so far in 2020, a 23% jump compared to same time period in 2019, when the city recorded 165 killings.During the brief speech, Shea said that, according to officials, 20 people "touch 100 shootings," without specifying the time frame. Shea said that the city may not need 1 million or 10,000 people in jail, but "these goddamn 20 people need to go jail."The speech mirrored what a number NYPD officials have espoused since the height of the George Floyd demonstrations in New York City: Police officers are now confronted with anti-police rhetoric that has gained support from city lawmakers and that has emboldened some to commit crimes, contributing in part to the spike in violence."You are going to be incredibly tested — incredibly tested, probably in the months to come this is not a short term problem. They have screwed this city up so much in a short period of time, it's going to take us a time to get it — our arms around it," Shea said. "It's already started I believe. Cops are incredibly challenged in how they can police today. There's no question." 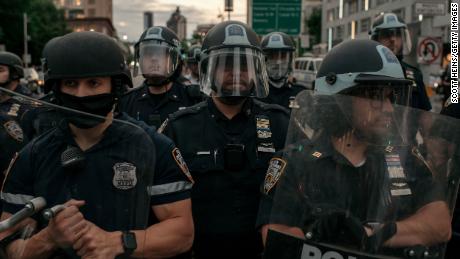 Yes, Four Police Officers Were Shot And Wounded In A Chicago Neighborhood During The...

On Saturdays we wear plaid: Kate Wright shares cute snap as she as Rio...

What I hope Bethesdas Starfield will be – Readers Feature

The Book Harvey Weinstein Carried To His Arraignment May Have Been...

admin - May 25, 2018
0
Disgraced Hollywood mogul Harvey Weinstein was perp-walked on Friday morning as he turned himself in..

All 50 states have issued warnings about mysterious packages of seeds

Chicago’s former top cop says he is leaving the job with...