With a lot of cheese, pepperoni and goodwill, three police associations in Toms River, New Jersey, joined forces to purchase 300 pizzas for their community, which is under a statewide stay-at-home order to try to halt the spread of coronavirus."Pizza is unique," Officer Jesse Robertazzi tells CNN. "A large pie can feed a family of four, potentially. It's circular and brings everyone together to pull a slice off to eat."Amid the financial and emotional stress of the coronavirus pandemic, Robertazzi says he hoped their Pizza Day would help families and businesses cope in uncertain times of social distancing. "For families, it gave them a sense of normality by getting out the house and getting into their favorite pizza shop" to pick up the pies (not to sit down and eat), the father of two tells CNN.And for the pizzerias, the officers hoped to offer the feeling of a regular workday and extra business they could use.

Robertazzi was inspired to organize the event after seeing a Facebook post showing colleagues in a nearby town pull off their own Pizza Day."I said, 'Why can't we do that?'" The officer called a colleague there and said, "I'm going to steal this for our town," he recalls.With a quick group text to some union members and a few calls to local pizza shops, his Pizza Day was on a roll. 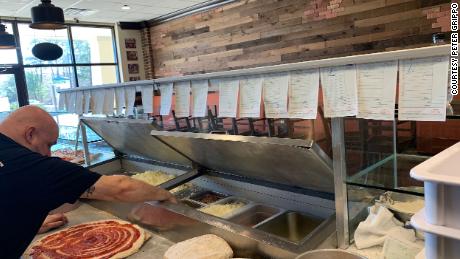 The officers paid for the pies with charitable funds from their organizations. They wanted to keep their dollars local and stand with the owners who often support them. "Our town is very supportive of us. We take care our residents," Robertazzi says. The officers announced the special event on their Facebook and Instagram accounts with a pizza graphic designed by their media office. Pies were prepped and served across six local pizza shops and ready for lunchtime: first come, first served — one per family. One pizza shop went "above and beyond" by throwing in a free side of garlic knots with every order, Robertazzi says. All shops were sold out within 90 minutes. "Our duty is to give back to the community," Robertazzi tells CNN. He hopes the initiative helped those who needed it most."To give back to the community who are out of work and struggling at the time — it gets them a free meal. It's one free meal and it's something." Community spirit is not a novel concept for his town, Robertazzi says."After Hurricane Sandy, we were on long, stationary 24-hour checkpoints during the winter. The residents provided us with food, coffee and firewood," he says."They came through for us. We want to give back and come throuRead More – Source

admin - July 9, 2020
0
The U.K. governments decision to invest in bankrupt satellite operator OneWeb is as much about compe..

Silicon Valleys Thomas Middleditch reveals he and wife are swingers: It...

admin - December 25, 2018
0
Kevin Spacey has been charged in connection with an allegation of indecent assault. The Oscar-winni..