In his 80-minute speech, Trump acknowledged Puerto Ricans when he expressed solidarity toward those affected by the floods, fires and storms that hit the country in the past year. "To everyone still recovering in Texas, Florida, Louisiana, Puerto Rico, the Virgin Islands, California and everywhere else — we are with you, we love you, and we will pull through together," Trump said.But lawmakers said he failed to give Puerto Ricans hope after FEMA said it was ending food and water shipments to the island."Not even a mention on PR and FEMA will stop providing food and water tomorrow. We are not in the Republican radar. We must double the fight," tweeted San Juan Mayor Carmen Yulín Cruz after attending Trump's speech.Cruz, a member of Puerto Rico's Popular Democratic Party, joined other lawmakers in calling out Trump for what they say is the President's failure to adequately address the crisis in the commonwealth in the aftermath of Hurricane Maria."Puerto Rico is a metaphor for how this President sees all Latinos and people of color: he does not see us as his equals and he does not see us as fellow human beings," said Democrat Rep. Luis Gutierrez in a statement following Trump's address.Hours before Trump's speech, the Federal Emergency Management Agency announced plans for halting new shipments of food and water to the island. The agency said in a statement that "FEMA-provided commodities are no longer needed."FEMA has called the island's emergency operation the longest sustained distribution of food, fuel and water in agency history, including more than $1.6 billion worth of food and more than $361 million worth of water.FEMA is cutting off shipments Wednesday. More than four months have passed since the hurricane battered Puerto Rico but nearly half a million power utility customers remain without electricity and some areas have no water or even supplies of milk, local officials said. 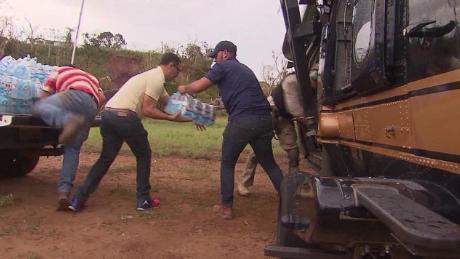 Gutierrez also said he "was hoping for some sort of apology on Puerto Rico.""If you look at how the President has treated Puerto Rico, you have to conclude that he just doesn't care and probably thinks of Puerto Rico as just another shithole country," he added.But Puerto Rico's sole representative in Congress, Jenniffer González-Colón, did not complain about the President's focus during his speech, instead she suggested that Trump's long-awaited infrastructure plan should begin in the island. "The rebuilding of infrastructure and the investment in job creation can start in Puerto Rico. We can be the place to launch programs to build back better infrastructure and to favor enterprise," she tweeted.This story has been updated to clarify Carmen Yulín Cruz's political affiliation.

‘Captain’ Daryl Dragon dies with Tennille at his side

Man fatally stabbed while holding daughter on his lap

Gentiloni wins backing for Commission despite doubts on detail

A Connecticut man is charged with manslaughter for allegedly assisting in...

A small change in football may lead to a significant reduction...

admin - October 2, 2018
0
A research letter published Monday in the medical journal JAMA said that after the Ivy League athlet..