About 25,000 members of the Chicago Teachers Union rallied Wednesday as Mayor Lori Lightfoot delivered her address on the city's budget. The city insists "there is no more money" to offer the union, but teachers say they won't back down until they get more support staff, higher raises and class-size limits in the country's third biggest school district. See what the teachers' union wants"We're willing to strike until we get the job done," CTU President Jesse Sharkey said. "We are not giving up this fight until we get what is just and what is right." As the adults bicker,300,000 students are missing a fifth day of classes Wednesday. Some students are playing board games or making origami instead of learning in class.Now, some parents are torn about which side to support."I support both sides, but I think they need to come to a mutual agreement and give a little on both sides because they're only hurting the kids," said Dominique Williams, the mother of two daughters in high school.The city has offered some concessions to the union, but said it can't afford to meet all their demands.So Wednesday's showdown at City Hall could mark a turning point in the strike.

'Things are just getting more and more chaotic'

One of the greatest needs is for more social workers in schools. That's especially true in Chicago, where many students struggle with poverty, violence and grief at a very young age. 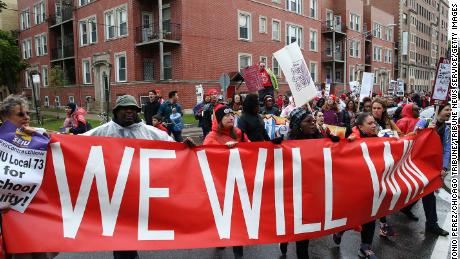 "Everything is so different from the way it used to be. It seems like things are just getting more and more chaotic as the years go by," said Williams, the mother of two on the city's tough west side. "A lot of these kids do need help. … Some of these kids do need that social worker because they can't talk to their parent. Or they can't talk to their friend. So they'll talk to that social worker because it's a separate entity away from what they got going on."One school social worker said she has to split her time between four buildings and 1,039 students. "I'm tired of telling kids that I can only be there 1 1/2 days of the entire week," she said. "We can't plan our crises according to when I'm there." 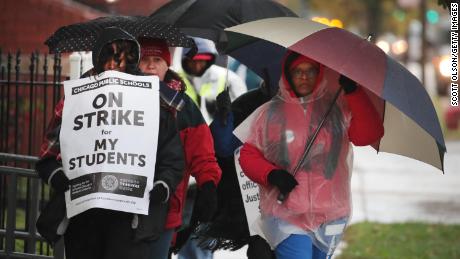 Darian Martyniuk,the father of two elementary school students, said he appreciates what the teachers are fighting for. But they may be asking too much from Chicago Public Schools. "While I think the teachers have some noble and worthy demands that need to be addressed, I think the union leadership is at best behaving cynically, at worst using whatever leverage they think they have to squeeze the most out of a system that doesn't have anything left to give," Martyniuk said. "Additional staffing like librariRead More – Source

Kendall Jenner goes wild for Ben Simmons as she cheers him on at Sixers...

admin - June 15, 2018
0
Adele has joined survivors of the Grenfell Tower fire tragedy to mark one year since flames engulfed..

admin - September 24, 2020
0
The announcement came Wednesday from the NFL Players Association, which has now launched an investig..