Flooding on Thursday left some Houston neighborhoods swimming in several feet of water, forcing authorities to perform more than 400 high-water rescues, the Harris County Sheriff's Office said. There were 323 stranded vehicles and 22 major accidents, it said.The chaos continued early Friday, when officials got a report that nine barges broke away from their moorings on the San Jacinto River, the US Coast Guard said.At least one barge struck the westbound bridge along Interstate 10, Texas Department of Transportation spokesman Danny Perez said. Officials are assessing the eastbound bridge for damage, with a full assessment planned when water level recede, Perez said. Both bridges were closed to traffic Friday morning, and vessel movement beneath them remained suspended following strong currents Thursday evening, Perez said. By Friday evening, at least two of the barges were lodged underneath the bridge and one was breached in the mud north of the bridge, the Coast Guard said. The other six had been corralled. The barges contained soybean oil, lube oil, naphtha and monoethylene glycol, the Coast Guard said. There had been no reports of pollution and there was no health threat to the public. There have been at least two storm-related deaths, officials said. Raul Eliseo Rivas-Hernandez, 56, was pulled Thursday evening from a van submerged in floodwater, Harris County officials said. The man died after being taken to a hospital. And in Jefferson County, 19-year-old Hunter Morrison died when he was electrocuted, then drowned, while trying to move his horse, according to a statement from his family posted at the Jefferson County Sheriff's Office's Facebook page. 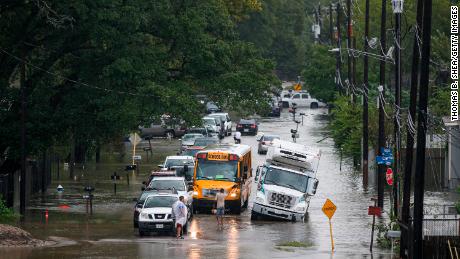 Imelda — the seventh wettest tropical cyclone in US history, per the National Weather Service — dumped more than 15 inches of rain across Harris County. Some areas in neighboring Jefferson County saw a whopping 43 inches of rain. Parts of southeast Texas and southwest Louisiana remain under flash flood watches, the National Weather Service said Friday morning. Parts of Arkansas will also see periods of heavy rain throughout Friday, with rainfall totals reaching up to 4 inches in some areas, CNN meteorologist Haley Brink said.

More than 200 vehicles had been towed in Houston by Thursday night, as floodwaters began to recede, Houston Police Chief Art Acevedo said. Residents began ditching their cars after heavy flooding made the roadways impassable. In Beaumont, a city in Jefferson County, neighborhoods turned into lakes and roads looked more like streams. Two overnight shelters were opened, CNN affiliate KPRC reported. Some neighbors helped each other, with one resident telling the station, "We're just trying to take care of our people." 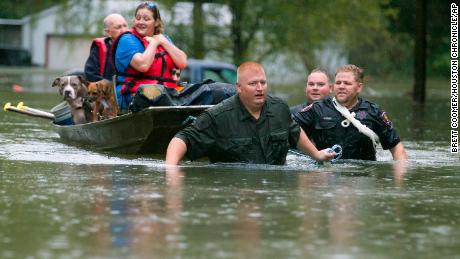 Floodwater poured Thursday morning into Beaumont TV station KBMT, forcing the news staff to move to Houston sister station KHOU to broadcast.Officials urged residents to get to safety. "If you are still in an area with standing water, seek higher ground and shelter in place," Beaumont police said. "Be patients and only call 911 for emergencies." Texas Gov. Gregg Abbott declared a state of disaster Thursday for 13 counties.Read More – Source

Kendall + Kylie are twinning in sultry sister snap from their...

Baba is You Review – Game-Changer

11-year-old boy pulls a drowning man from the bottom of a...