"I thought, 'I'm 59 and I went through a few things, this is it,' " he told CNN on Tuesday morning after a suspected tornado ripped through his home in Brookville, Ohio, northwest of Dayton.Two suspected tornadoes slammed the Dayton area Monday night, coming just 30 minutes apart, according to the National Weather Service. A third killed a man and injured several other people about 70 miles north of Dayton.In the Dayton area, the first suspected tornado crossed Interstate 75 north of the city around 11:07 p.m. and carried a "tornado emergency warning," the highest the weather service gives. The second crossed the highway about three miles away.The weather service said it will conduct damage surveys over the next few days throughout the state, including Dayton. As Sussman heard the warnings Monday night, he said he wasn't paying much attention because "we get tornado warnings regularly.""I went to the kitchen with my laptop to look at the radar news," he said. "As I look at it, I'm seeing that I'm in the direct path, so I'm getting concerned." He got up, went to the back of his house and shut a window. "So enormous was the magnitude, the presence of what was about to happen that it took over my body," he told CNN. "Something told me to not continue to be in the room so I went to the hallway." Seconds later, the front room of his house was blown apart. "I was hit by debris in my head," Sussman said. "I looked up and I no longer had a roof."I stood in the middle of the hallway and didn't know if I was going to survive." 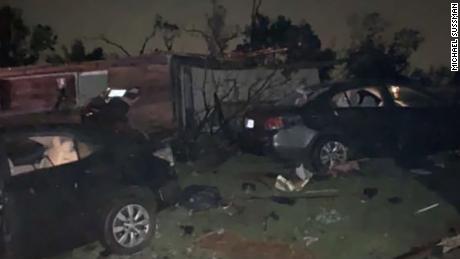 Everything lasted for about 20 seconds, said Sussman's ex-wife, Caron Cantrell, who lives in a nearby town. "The house is destroyed," she said, "will have to be torn down. Many houses around the neighborhood are destroyed, too."Sussman's daughter and her boyfriend were in the house as well. They hid in a bathtub and were not injured. "We tried to get away from the debris, among water patches and electrical wires swinging," Sussman said. "We went out in the streets and children were screaming and crying. Devastation everywhere."It took emergency vehicles 20 minutes to arrive, he said, during which time he was "drifting, covered in blood." There was only one ambulance going in and out as the neighborhood was being evacuated, he said.Sussman suffered a concussion and had to get six stitches, but "he's going to be OK," Cantrell said.

Michael Tope took his son and his pets into a bathroom of their Dayton-area apartment when tornado sirens blared Monday night.He was watching live TV coverage of the storm on hRead More – Source

Fortnite Week 6 Challenges: What are the Season 6 Week 6...

Brotzmann/Leigh review: The loud, living soundtrack to what it is to...

admin - March 29, 2018
0
Amazon has seen tens of billions of dollars wiped off its market value after Donald Trump turned his..