Texas will get deluged (again)

The Lone Star State can't take much more rain. But on Wednesday, Willa is forecast to dump up to 4 inches in parts of Texas. Much of central and eastern Texas has already been soaked this past month, CNN meteorologist Monica Garrett said. "If rain falls heavy enough, flash flooding could become an issue," Garrett said.

The Southeast will get hit next

Willa will continue its rain-soaked march to the Southeast, where it's expected to drop 1 to 2 inches of rain. Areas around the Gulf Coast will get drenched the most, Garrett said.

In Willa's dramatic finale, remnants of the former Category 5 hurricane will move into the Atlantic Ocean and get a startling makeover this weekend. 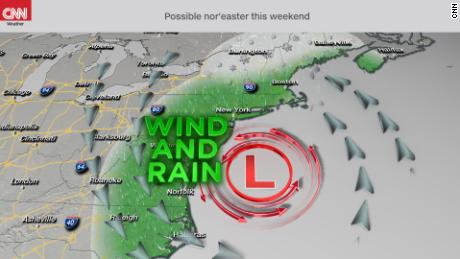 "The storm will encounter colder air, which will transform from a tropical area of low pressure to a more wintertime-like storm system," CNN meteorologist Brandon Miller said. "If the low pressure tracks up the East Coast of the US, it could become the season's first nor'easter. This would bring significant amounts of rain and wind Saturday and Sunday in cities like Washington, D.C., Philadelphia, New York City and Boston." The good news: Major cities in the Northeast will probably avoid snow. But inland and mountainous parts of the region might not be so lucky. "Exact impacts will depend on the particular track the storm takes up the East Coast, and some models take the system farther out to sea, which would minimize the wind and snow/rain amounts," Miller said. "Either way, it appears that Hurricane Willa will have a second life over the United States, though the impacts will be much different than those it is bringing to the Pacific Coast of Mexico."

Trump and friends: Where European countries come down on Huawei

Working Lunch: Joe Allen is a safe bet in the heart...