After rapidly intensifying Tuesday into a Category 4 hurricane, Genevieve weakened significantly Wednesday and is back to a Category 1 hurricane with winds of 85 mph — but is now expected to track a bit closer to land than previously forecast.As of Wednesday evening, the storm was centered about 85 miles south of the southern tip of the Baja California peninsula and moving to the north-northwest at 8 mph.

While Genevieve isn't expected to make landfall along the Baja California peninsula, it will pass about 70 miles offshore late Wednesday and Thursday morning before moving away from land Friday.Hurricane-force winds remain very close to the center, only extending outward about 35 miles."Only a slight deviation to the right of the track would bring hurricane-force winds onshore," the US National Hurricane Center warns, "and the government of Mexico has issued a Hurricane Warning for a portion of the southern coast of Baja California." 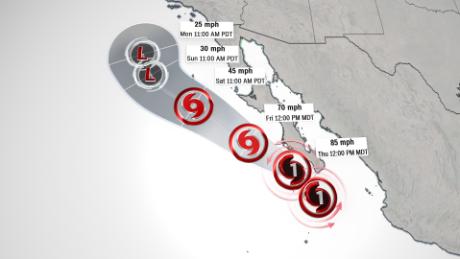 With tropical-storm-force winds extending out for 140 miles, tropical storm watches and warnings are in place for the southern Baja California peninsula.In addition to strong winds, heavy rainfall is expected in this area, with up to 10 inches of rain possible. This rainfall may lead to life-threatening flash flooding and mudslides.Large swells generated by Genevieve are affecting portions of the coast of southern Mexico and will spread northward along the coast of Mexico to the Baja California peninsula through Thursday.

Storm unlikely to give US West any relief

Genevieve is churning offshore as the American West experiences an incredible heat wave with record-breaking temperatures and dozens of fires scorching the terrain — conditions that have residents there desperate for cooler temperatures and rain. 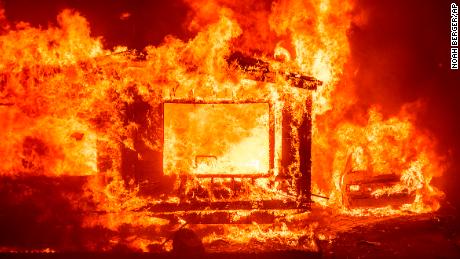 But the storm will remain well offshore and dissipate over the cooler waters of the Pacific by the weekend, meaning it won't deliver the break so many to the northeast are looking for."There will be a slight increase in moisture and temperatures will come down a few degrees, but it will continue to be above average with the monsoon showers being few and far between Friday and Saturday," CNN meteorologist Tom Sater said.

On Monday morning, Genevieve was a tropical storm with winds of 65 mph. By Tuesday afternoon, its winds reached 130 mph as a Category 4 hurricane. Because of warmer ocean temperatures due to climate change, meteorologists expect more Read More – Source

‘Wakin Chau?’ Wife of Indian envoy to Taiwan meets singer 20 years after she...

‘Marriage Story’ explores the pain and confusion of divorce

admin - November 7, 2019
0
Baumbach charted divorce from the perspective of the kids in "The Squid and the Whale," but here it&..

Darq Review – Beast Under Your Bed

As Bill Cosby Is Led Away To Prison, His Publicist Blames...