More student athletes could be affected as the strike drags on. Since the strike started last Thursday, more than 300,000 students have missed classes for a fourth day on Tuesday. Under Illinois High School Association policy, many tennis and soccer teams have been prohibited from competing in playoff tournaments that started after the strike. The strike is threatening the upcoming football playoffs that start on Nov. 2 because a certain amount of games and practice are required to be eligible to compete.As a stalemate continues, a Chicago Public Schools spokesman said students rely on their coaches for guidance and it wouldn't be safe to compete while staff members are on strike. Coaches are making the difficult choice to strike to improve conditions for student-athletes in the long term, unions officials say. "They've worked and trained, many of them, year-round for this opportunity … to culminate in a state championship opportunity," Craig Anderson, the association's executive director, told CNN. He said parents "want to get their sons and daughters back on the playing fields, back on the courts, and have the opportunity to compete."

'We want our students playing sports'

Emily Bolton, a Chicago Public Schools spokeswoman, said the impact on student athletes "is among one of the many truly devastating consequences of the Union's strike." "The District's only priority remains coming to an agreement with the union as soon as possible to prevent additional disruption to students and families," she said. Coaches are not going to break a picket line, said Alison Eichhorn, a social science teacher and varsity softball coach at Lindblom Math and Science Academy. "We are here because we want our students playing sports. We know what sports does to a child," she told reporters this week. She said Chicago Mayor Lori Lightfoot "has the ability to settle this contract this week and get those students back to playing their sports." 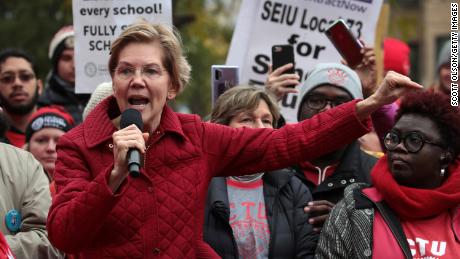 Football playoffs threatened by the strike

In a letter on Monday urging the Chicago Teachers Union to end the strike as negotiations continue, Lightfoot wrote about the strike's impact on sports teams and referenced the top-ranked Simeon high school football team. "Our girls soccer teams were forced to forfeit each match in the state tournament this weekend," Lightfoot wrote. "Our boys soccer teams, including Solorio High School, looking for its second championship in three years, were unable to participate in the state playoffs."Simeon's football team is ranked in the top 15 in the state, Anderson said.Each football team has to play at least eight games to qualify for playoff competition. Simeon has played seven games; it's eighth game is set for Friday, Anderson said. There are also practice requirements to be eligible for competition. If a football team can't practice for seven straight days, not including Sunday, the team has to practice for three consecutive days to be eligible to compete, under association rules, Anderson said. The Chicago Board of Education has yet to vote allow teams to practice Thursday — which wouRead More – Source

Mark Hix heads to Norway to fish for cod and cook...

admin - May 8, 2018
0
Ive just been on a whistle-stop trip to Norway with fellow chef Valentine Warner, staying in a villa..