Bungie's next big expansion to Destiny 2, Forsaken is coming later today, introducing an incredible new chapter in the Destiny Storyline and plenty more besides.

When? You're probably asking. Well first of all Bungie will be releasing a small hotfix (2.0.0.1) which will precede the launch of the new content.

"On Tuesday, September 4, Destiny 2 will undergo maintenance to receive Update 2.0.0.1." the developers told fans on the most recent 'This week at Bungie' blogpost.

"The conclusion of this maintenance will mark the launch of Destiny 2: Forsaken, and this hotfix will be required to log in and play."

This Hotfix will be deployed at "7:00 AM PDT" which for anyone in the UK is 3pm BST, with all players booted from the game at 3.30pm BST at the latest.

You'll find a complete deployment schedule, via Bungie, just below:

• 7:00 AM PDT: Players will no longer be able to log in to Destiny 2. Players leaving activities will be returned to the title screen. Hotfix 2.0.0.1 will begin rolling out across all platforms and regions.

• 7:30 AM PDT: Destiny 2 will be taken offline for maintenance, and all remaining players will be returned to the title screen.

• 10:00 AM PDT: Destiny 2 maintenance is expected to conclude, and Destiny 2: Forsaken will become available to play on all platforms.

Following the release of Hotfix 2.0.0.1 Bungie will release official patch notes, but you shouldn't expect these to be too extensive since, they're maining fixing a few bugs that have been noticed since the most recent update from August 28th.

The next big DLC drop is called Forsaken and is due to launch on September 4.

This new DLC won't be part of any previous Season Pass content you may have bought, and will require a separate purchase on top of the base game in order to access. You can read more about purchase options below. You will not be able to access Forsaken without access to Destiny 2 and expansions I and II.

The DLC will introduce some massive changes to how Destiny 2 works, as well as introducing new modes, new missions and – of course – new gear. Bungie has stated that more work has gone into the endgame content of this DLC drop, in order to address players' biggest complaints about the title.

For the purpose of this Destiny 2 Forsaken guide, we'll cover everything you need to know about the upcoming Activision game ahead of release.

This shall include all the rumours about the game so far, as well as various development updates from the studio.

Between now and its inevitable announcement, we'll continually update this page with all the latest news and information you need as it's revealed.

Drop in for the reveal of the second year of Destiny 2. 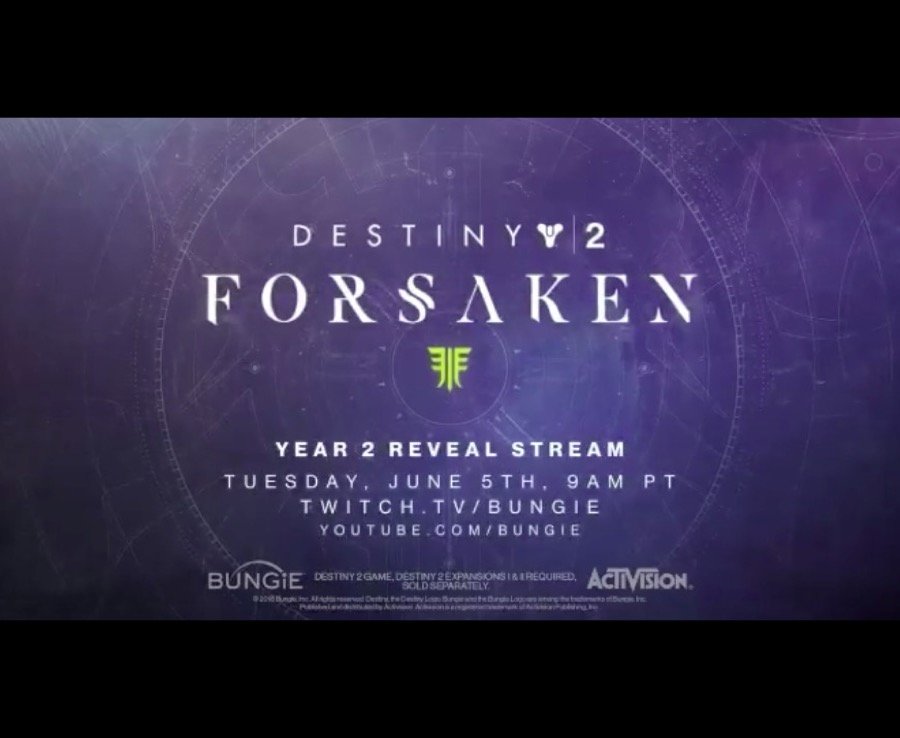 Destiny 2 Forsaken – What is it?

Here's a brief overview of the story, as per Bungie:

Following years of strife, what remains of the Reef has fallen to lawlessness. You and Cayde-6 are sent to personally investigate the recent unrest.

Upon arrival, you soon discover the most-wanted criminals in the Prison of Elders have organized an escape. Beyond the Vanguards authority, youll pursue these fugitives deep into the Reef. Explore new regions, awaken new powers, earn powerful weapons, and uncover long-lost Awoken secrets. The hunt is on.

Destiny 2 – Forsaken: How much will it cost?

It was also announced that PlayStation gamers will get access to the following timed exclusive content: a strike, one gear set per class, a new ship and an exotic weapon.

At Destiny 2: Forsakens launch, the previously released Destiny 2 launch timed exclusives will be made available for all platforms.

For Destiny 2, Bungie will also be implementing a brand new “Annual Pass”, similar to that of Fortnites Battle Pass, giving players a year-long access to endgame content that isnt attached to the larger expansions.

The Annual Pass will give Guardians access to the new weapons, areas, and raids from three substantial additions to the game that Bungie has planned, and will cost extra on top of the Forsaken expansion.

Bungie has described the Dreaming City as ”like the Vault of Glass and Dreadnaught had a baby.”

Bungie added the Dreaming City is “Full of secrets to discover and bosses to defeat, this destination also houses the brand-new raid and is the first space designed from the ground up to support endgame content.”

The Dreaming City is full of nature and greenery, though this is likely all to change as the raid descends into chaos.

Dreaming City is supposedly an endgame area, entirely cut off from the rest of the game, with Guardians able to do other activities in the region other than the raid.

Why Im a fan of the Desert Strike series – Readers Feature

Alan Bennett’s new play is a cosy, yet cautionary, tale

Humans may have reached Europe by 210,000 years ago