Millions in these regions will bundle up against temperatures in the single digits and teens during the day and near or below zero at night. But wind chills will make it feel far colder: as low as 20 to 40 degrees below zero in parts of the Northeast.In photos: Brutal cold torments the USThe brutal cold comes after a "bomb cyclone" dumped more than a foot of snow across eight states, knocking out power for tens of thousands and deluging streets in Massachusetts with icy water.The storm has moved away, but strong winds remain in the Northeast, challenging crews who are trying to restore power and disruptions to indoor heating — a major concern with these dangerously chilly conditions.The storm heaped plenty of misery across the region. Waves from the sea washed into Boston streets — the tide in the harbor matched a record of 15.1 feet set during the blizzard of 1978.Stunned residents had to flee their homes in coastal Massachusetts as frigid waters poured into their streets and engulfed their cars in ice.

• Going dark: More than 7,800 customers along the East Coast were without power, according to reports from 10 states. • Deadly conditions: At least 19 people have died this week due to severe weather, officials said. Six deaths were reported in Wisconsin, four in Texas, three in North Carolina, and one each in Ohio, Michigan, Missouri, North Dakota, South Carolina and Virginia. • Frozen dead on porch: Among the dead was a 64-year-old man whose body was found lying in front of his wheelchair Tuesday afternoon on the porch of his Akron, Ohio, house, authorities said. Temperatures had been in the single digits that morning, and a Meals on Wheels driver discovered him.• Freezing cold: Wind and cold temperatures will be threats Friday and Saturday. Wind chills will be brutal this weekend, with some areas in the Northeast feeling like it is 40 below zero. Saturday is expected to be the coldest day.

Emerging from the storm

The storm flooded streets in some communities in coastal Massachusetts, turning roads into slushy rivers. On Friday, areas were freezing over."We'll use a big pump (to) move some of the ice around, but we really have to wait for the weather to warm up," said Rob Reardon, captain of the fire department in Duxbury, about 35 miles southeast of Boston.On Thursday, firefighters and the National Guard scrambled to rescue dozens of coastal residents stranded by freezing water pushing from the Atlantic. First responders braved the frigid waters using rubber rescue boats and high-water vehicles.In Hull, just to the southeast of Boston, the icy mess inundated streets, with water above the wheel wells of cars and coming up to the doors of homes.Some residents were forced to flee. In one case, the fire department used a front-loader to rescue a woman from the second floor of her home, photos from neighbor Jennifer Olivieri show. 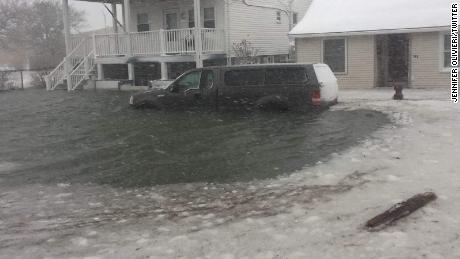 In Marshfield, also southeast of Boston, National Guard troops used a truck Thursday to take people out of homes surrounded by floodwaters. "There was a lot of water outside," Alex Cametti, who was rescued, told CNN affiliate WBZ. "It looked like there was about 2 feet, and there (were) cars outside almost completely underwater. And there was water coming in the back door, right into the kitchen."Connecticut, Maine, Massachusetts, New Hampshire, New Jersey, New York, Rhode Island and Virginia reported at least a foot of snow Thursday. Dedham, Massachusetts, had 19 inches of snow, according to the National Weather Service. Meanwhile, 13.4 inches came down in Boston; 9 inches covered the ground in Manhattan; 10.2 fell in Hartford, Connecticut; and 14.1 inches were measured in Providence, Rhode Island.Track severe weather across the country

More than 1,100 flights have been canceled Friday, following the 4,300-plus ones called off a day earlier, the tracking service FlightAware said.New York's John F. Kennedy International Airport resumed flights Friday morning. Travel disruptions affected Greyhound buses and Amtrak, which reduced or canceled service. Officials urged drivers to stay off the roads, saying too many people were getting their cars stuck. "We want to clear the streets," Boston Mayor Marty Walsh said Thursday. Winter storm wipes out thousands of flightsWith the snow largely over, cold air is settling through swaths of the Midwest and East Coast. Dozens of cities are set to endure record-breaking cold, CNN meteorologist Brandon Miller said. "Temperatures will be falling through the day as Arctic airmass moves overhead," the National Weather Service in Boston said via Twitter early Friday.