Each of the organizations faces scores of sexual abuse lawsuits that allege the organization failed to stop serial predators from abusing young children. And each has filed for Chapter 11 bankruptcy protection to figure out a way to pay those victims.Despite those broad similarities, there are differences in the scale of the lawsuits and abuse claims against each organization.Two bankruptcy experts told CNN the Boy Scouts case is somewhat closer to asbestos-related bankruptcies, such as for US Gypsum or Owens Corning. That's because the Boy Scouts, like in those cases, does not yet have a handle on how many victims will make claims.Still, filing for bankruptcy can make sense for organizations dealing with extensive lawsuits, said the experts, Pamela Foohey, associate professor of law at Indiana University Maurer School of Law, and Karen J. Porter, an attorney who has extensive experience with Chapter 11 bankruptcy cases.The general idea of Chapter 11 bankruptcy is to pause those lawsuits, figure out how much the group owns and how much it owes, and then set up a plan to pay off its creditors. Filing for Chapter 11 allows these organizations to continue operating and making money even as they reorganize for the future, negotiate with their insurance and set up a trust to dole out payments to claimants going forward.Here's an examination of the bankruptcy filings of the Boy Scouts, 23 US Catholic dioceses and religious orders and USA Gymnastics.

The Boy Scouts of America, which celebrated its 110th anniversary February 8, filed for bankruptcy in Delaware bankruptcy court early Tuesday. The organization listed liabilities of between $100 million and $500 million and estimated assets of $1 billion to $10 billion.The bankruptcy filing comes at a time when the organization faces hundreds of sexual abuse lawsuits, thousands of alleged abuse victims and dwindling membership numbers. As a result of the filing, all civil litigation against the organization is suspended."We took this action today amid increasing financial pressure on the BSA from litigation involving past abuse in Scouting," officials with the organization said in a statement. "We are outraged that there have been times when individuals took advantage of our programs to abuse innocent children and sincerely apologize to anyone who was harmed during their time in Scouting.""We believe victims, we support them, we provide counseling by a provider of their choice, and we encourage them to come forward. Our plan is to use this Chapter 11 process to create a Trust that would provide equitable compensation to these individuals," they added.Last April, exposed court testimony showed the organization believed more than 7,800 of its former leaders were involved in sexually abusing more than 12,000 children over the course of 72 years.Paul Mones, a Los Angeles-based attorney representing "hundreds of sexual abuse victims in individual lawsuits," called the organization's bankruptcy filing a "tragedy."

The allegations against USA Gymnastics stem from team doctor Larry Nassar's abuse of hundreds of girls and young women over decades. Nassar was sentenced in January 2018 to 40 to 175 years in prison after he pleaded guilty to seven counts of sexual misconduct. Prior to his sentencing, more than 150 women and girls spoke in court about how he had sexually abused them under the guise of providing medical care.Faced with a growing number of civil lawsuits related to Nassar, USA Gymnastics filed for bankruptcy in December 2018. The organization said the filing would help "expedite an equitable resolution of the claims made by the survivors of sexual abuse perpetrated by Larry Nassar." 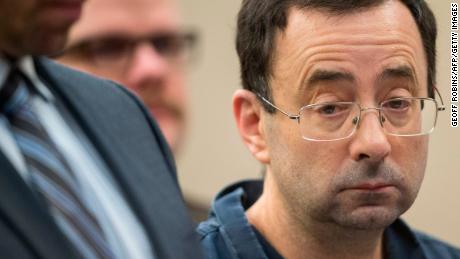 "We owe it to these brave women who have come forward," USA Gymnastics added.In late January, USA Gymnastics offered Nassar's victims a $215 million settlement as part of a plan for the organization to exit bankruptcy.Under the plan, filed in US Bankruptcy Court for the Southern District of Indiana, survivors who suffered sexual abuse at Nassar's hands can either vote as a group to accept the $215 million settlement, or continue to pursue their lawsuits. Any judgments from those lawsuits would be collected from USAG's insurance policies."While we do not yet have an agreement with the Committee representing the survivors, we still hope to reach an agreement," Li Li Leung, USAG's president and CEO said in a news release. "USA Gymnastics filed its proposed plan to communicate to the survivor class the two options that are currently available based on the amount of money USA Gymnastics' insurers are willing to pay into a settlement fund."That plan came in for criticism from Rachael Denhollander, the woman who first brought Nassar's abuse to public attention, as well as from John C. Manly, an attorney who represented many victims."I'm not in a position to reject it, but in speaking to my clients and other lawyers, there's a better chance of Donald Trump enRead More – Source

Roseanne Will Get Muslim Neighbors And Wonder If Theyre Terrorists

Donald Glover’s shares ‘Deadpool’ script that could have been

A man wore a sign to find his wife a kidney...