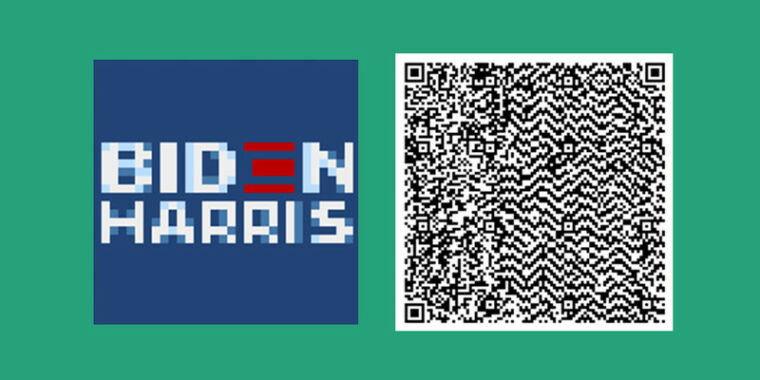 Joe Biden's presidential campaign is rolling out a series of official virtual yard signs designed for display on islands in Animal Crossing: New Horizons for the Nintendo Switch.

As first reported by The Verge, the four virtual sign designs squeeze supportive messages for the Democratic candidate into a 32 x 32 pixel, 16-color custom pattern square, suitable for displaying on a sign in front of your virtual house. In addition to the standard "Biden Harris" and "Team Joe" designs, the campaign has also released a version with a rainbow pride logo integrated into the "JOE" branding and a design featuring Biden's signature aviator sunglasses in red, white, and blue.

In the course of normal gameplay, an Animal Crossing yard sign will only be directly visible to the few players who actively decide to visit the island where they're displayed. But to get the designs out there, The Verge reports, the campaign is sharing the designs with a handful of influencers who will feature them in gameplay streams throughout the day starting today.

"Animal Crossing is a dynamic, diverse, and powerful platform that brings communities together from across the world. It is an exciting new opportunity for our campaign to engage and connect Biden-Harris supporters as they build and decorate their islands," Christian Tom, director of digital partnerships for the Biden campaign told The Verge. Tom added that the campaign has plans to roll out further election materials through Animal Crossing and other platforms.

Political campaigns using video games to get their message out has a short and spotty history. Former Virginia Gov. Mark Warner was among the first politicians to be interviewed in Second Life's virtual world back in 2006, an interview locale which Read More – Source

Anthropologists describe the first skeleton of a Homo naledi child

Jay Chou’s restaurant to close due to falling business caused by...

admin - May 3, 2020
0
Even Taiwanese superstar Jay Chou's restaurant has not been spared by the coronavirus pandemic...

Love Islands Chris Hughes admits he has his eye on Laura...

admin - September 4, 2020
0
One of the Summit series laptops. MSI With these very important business laptops you, too, can lo..