He has high points and low. He still plays outside, watches TV and loves video games — the pastime he was enjoying when the officer shot his Aunt Tay through a window — but "he has moments when he's not OK," Amber Carr, 30, said of her son.Zion suffers from post-traumatic stress disorder, family attorney S. Lee Merritt told CNN. Like many Black children, he's frightened by what he sees going on in the country. His family makes sure he has resources, counseling and plenty of friends to talk to, but the trauma, "it seeps into his play," Merritt said. As Americans face a reckoning over the deaths of George Floyd, Ahmaud Arbery and others, Jefferson's three siblings sat down for a video conference with CNN. They want to remind America that amid its demands for justice in police killings, protesters should not forget their sister. "This literally was one of those situations where this could've been anybody," Ashley Carr, 36, said.

On October 12, Jefferson was babysitting Zion for Amber, who wasrecovering from heart surgery. She'd been released from rehabilitation two days prior. Jefferson was a caretaker. She adored family time, whether it was holidays or a game of spades. Zion and his aunt were playing video gamesaround 2 a.m. when two Fort Worth police officers arrived, responding to a concerned neighbor's call about doors being open at Jefferson's home. Jefferson, 28, heard something outside and grabbed her gun. Officer Aaron Dean did not identify himself as police. He demanded, through the window, that Jefferson show her hands before opening fire, killing her, bodycam footage shows. "That is a blessing that I think that we have for ours is that we have a video because how would that narrative have went?" asked Ashley Carr. "What we have noticed, even with the Ahmaud Arbery case, is that that narrative is not how the video went. … If the cameras weren't there, all of a sudden it could've been, 'It was a shootout and blah blah blah,' and we would've had to take their word."The family has struggled watching videos of recent police killings. "Revictimization: I didn't think how serious it was until I really started watching other people get killed," brother Adarius Carr, the father of a 7-month-old, said. "I definitely feel the passion, the hurt, the anger rebubble up — the need to do something, the need to fix our community, the need to figure out what can I do to make this world better for my son and for kids Zion's age. … It happens every time that I watch it, so that's why I said sometimes I just don't watch it. You can't."Ashley Carr never finished watching the Floyd video, in which a Minneapolis police officer knelt on his neck for almost eight minutes. "Longest video of my life," she said. She's familiar with other killings, and it makes her question the rules. At least during Jim Crow, she said, it was clearer what Black people could and couldn't do. Now, it feels nebulous, she said. "I can't sit in my house and play video games. I can't go out and run for a jog. I fell asleep at Wendy's in my car, and now I'm losing my life. These are crazy things. I can't walk from the store — Elijah McClain — and I'm telling you, he's literally telling you he's an introvert," she said. "We're literally just doing normal, everyday things and you can still be killed. That's a crazy place to live in. That's a scary place to live in, but that's the reality of a Black person."Amber Carr did finish the Floyd video. Upon seeing the 46-year-old plead for his mama, she thought of her sister."I wouldn't say I felt her or I saw her, but it made me wonder," she paused for several seconds, tears welling in her eyes. "What were her last words? To hear them say their last words, did she cry out for her mom? Did she cry out for someone?"

'He wasn't even safe in the home'

Adarius Carr is already planning to have "the talk" — the Black boys' rite where parents explain they will be treated differently for their skin — with his infant son, Thaddeus. He doesn't know how the chat will go, but he's locked down the theme. "The best I can tell him is: Make it home to me," he said. "Just make it home, son, as fast as you can. Whatever you have to do, make it home."It's a sad reality Black children's parents must prepare for these conversations before their children have reached maturity, said Amber Carr, who also has a 4-year-old, Zayden. Zion is smart. He knows what's happening. He knows why he's attending protests and rallies, but he doesn't understand the big picture, she said. He's too young. "The bigger picture is I don't want you go outside and play because they don't like you out there. I want you in the house because I can watch you. I feel like you're safer in the house, but then I can't even say that," she said. "He wasn't even safe in the home."At the same time, Zion witnessed and lived through something to which none of his relatives can relate. Zion will occasionally remember a game he played or a trip he took with Aunt Tay and start talking, but his mother doesn't press him, she said."He actually lived the experience. We as his elders, we didn't experience anything like he's just experienced. I've only watched things like that on television," she said. "I don't ask him questions. I don't know if I don't ask him questions for him or me. Probably for the both of us."

Life as a coping mechanism

Adarius, Amber and Ashley — whose mother had dubbed them the A-Team before her passing earlier this year — try mightily to live normal lives, despite the pall of their sister's killing hanging over them. Yolanda Carr, their matriarch, was ill when tragedy struck in October. Jefferson had moved home to Fort Worth to help care for her. Yolanda learned of Jefferson's death in the hospital. She was too sick to attend the funeral and sent a eulogy for the pastor to read. Less than three months later, she passed. "Being in the hospital and not being able to be herself and not being able to fight, that's crazy," Ashley Carr said. "It's a lot of emotions that come back up, but through all of these emotions, we all have to still get up and go do jobs. We have to make sure that our kids are ready, that the household is still running — all while having this on our back. It becomes a lot." 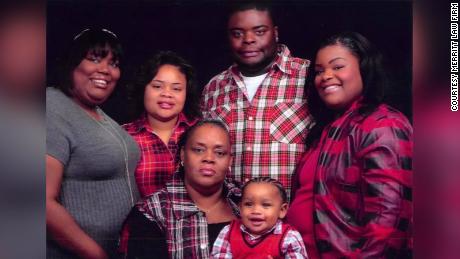 Amber Carr hears praise about how well she's handling the loss, but there's no magic to it, she said. She has no choice but to persevere. "People ask all the time, 'How do you do it? How do you smile through it all?' It's life, you know? You have to keep living," she said. "I have my moments where I might not sleep for days or I might be in the car and I just start crying. You just have your moments."Like anyone, there are times when the siblings want to block out the world and forget their woes, but it isn't realistic. They must fight for justice. They must keep their sister's name alive, to ensure people understand she lived for something and died for nothing. "Some days, you do want to just crawl up under a rock and pray that this all goes away. You think you're living in a nightmare, but this is life. This is our new normal, as they call it. We're trying to embrace this new life," Ashley Carr said.

The Atatiana Project and Sisters of the Movement

Adarius Carr wishes he could do more. He left home about 12 years ago and now serves as a boatswain's mate in the US Navy. Military obligations prevent him from being as involved as his sisters in activism. One of the family initiatives of which he's proudest is the Atatiana Project, which serves to bridge police and urban communities, and promotes STEM careers — with an emphasis on coding and gaming — for children. Jefferson, a biology graduate from Xavier University of Louisiana, worked in pharmaceutical equipment sales and wanted to become a doctor. The Atatiana Project launched on Juneteenth. Adarius, 32, loved playing video games with his little sister. Role-playing, fighting games — nothing was off limits. As kids, they'd play all night and be bushed when it came time to go to school, he said. The memory brings a bright smile to his face. The last time the Navy chief petty officer came home from deployment, he and Jefferson played Warframe for four days — "all night giggling, laughing, telling jokes. She's always a class act, always had me in stitches."Today, he keeps his sister's pillow in his gaming room in San Diego, where he's stationed. He catches himself asking her questions about the games he's playing. "Giving back is a big thing for us in general," he said of the Atatiana Project. "When you're hurting, it is sometimes better to just get people around you that understand the hurt, or you can help them with their hurt. We've been through a lot, and we want to see if we can help the next person."Amber and Ashley Carr have found solace in another initiative, Sisters of the Movement, an organization founded by women who lost siblings to police violence, including Sandra Bland's, Terence Crutcher's and Shantel Davis'.Another founder, Allisa Charles-Findley, the sister of Botham Jean — who, too, was killed in his own home by a Texas police officer — helped Ashley Carr navigate losing a sRead More – Source

Yes, Elizabeth Warren Is Featured In The Pocahontas Exhibit At The National Museum Of...

Reprieve for man who plotted own family’s murder

Cuphead: The Delicious Last Course DLC delayed until next year

Trump details plan for tougher US entry for migrants

admin - July 18, 2018
0
A jaguar that killed nine animals at a New Orleans zoo is believed to have bitten through steel mesh..