Antonio DeShawn Daniels, also known as "Freckleface Shawn," was arrested on July 27 after federal authorities executed search warrants on multiple locations in Atlanta where he was known to distribute drugs, according to the US Attorney's Office of North District of Georgia.In total, authorities said they seized 170 kilograms of heroin, 10 kilograms of cocaine, eight kilograms of marijuana, more than $1 million in cash, and 41 firearms."That's a ridiculous amount of heroin. I was stunned," Robert J. Murphy, special agent in charge of the Drug Enforcement Administration's Atlanta Field Division, said at a news conference on Wednesday. "Several kilos would be a big seizure in the past," he added. "I never in my entire 30-plus years of law enforcement would have ever expected to see this much heroin seized here in Atlanta."Authorities estimate the value of the drugs at $8.5 million. Murphy told CNN affiliate WSB that it is by far the biggest heroin seizure in Georgia's history.Before the Covid-19 pandemic, the nation was in the throes of another public health crisis: the opioid epidemic. More than 2 million Americans struggle with opioid use disorder, and about 130 Americans on average die every day from an opioid overdose.

On Wednesday, the US Attorney's Office of North District of Georgia announced Daniels, 46, was indicted on federal charges related to possession with the intent to distribute heroin, cocaine, and marijuana, and possession of a firearm in furtherance of drug trafficking. "The quantity of drugs, money, and firearms allegedly controlled by Daniels highlights the scale of heroin and cocaine trafficked into this community by local drug dealers with high-level ties to international drug trafficking organizations," US Attorney Byung J. Pak said in a news release.CNN has reached out to Daniels' lawyer for comment but has not received a response. 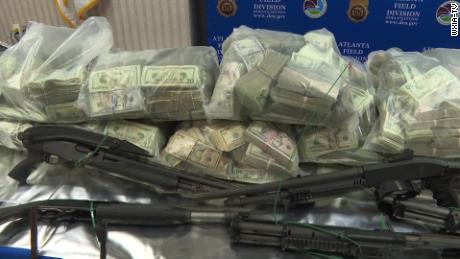 The case stems from a long-term investigation by the Drug Enforcement Administration and Federal Bureau of Investigation with assistance from state and local authorities. During the news conference, agents involved in the case said Daniels was connected to the Jalisco New Generation Cartel in Mexico. Last year, the DEA listed the cartel as one of the most powerful and fastest growing cartels in Mexico and the US, behind the Sinaloa Cartel. It has major hubs of distribution in Los Angeles, New York, Chicago, and Atlanta, Read More – Source

Could this tiny robot make roadworks misery a thing of the past?

Video: The people who helped make Star Control 2 did a ton of other...

From a secret mission to a journey to Bosnia, be part...

admin - July 16, 2019
0
The Foreign Minister of Iran Javad Zarif spoke out in an interview Monday night about the Iran nucle..