No, it was the beginning of the horrible '70s.Those hippies planted the seeds of Obama, #MeToo a Green New Deal.No, those hippies washed off the mud, voted for Reagan and started new wars. It proved that humans are mostly good. But then Manson killed the buzz. Or the Hell's Angels at Altamont. Or disco. But at least Hendrix was amazing!No, Hendrix was awful. Gypsies, Suns and Rainbows? C'mon, Cocker was so much better. These are just a few of the 400,000 arguments you'll hear chasing the legacy of Woodstock. Ask those who were there, "Why did it work?" "What did it mean?" "Could it ever happen again?" and you'll hear soliloquies on the Nixon/Trump nexus, legalized cannabis and the decline of hitchhiking.A half century later, music festivals are part of a live music industrial complex worth around $31 billion, more than the GDP of 62 countries. But in 2019, the idea of "breakfast in bed for 400,000" in a field without fences, ticket booths or metal detectors seems like the stuff of fairy tales.Now, more than ever, a search for the Woodstock connection seems vital. While everyone's long, strange trip was different, every character I met while making a golden anniversary special for CNN agreed that it was special in ways that had nothing to do with the music. How, in the middle of a cold civil war, nearly half a million people avoided humanitarian disaster through pure human connection. Of all the Woodstock stories I heard, these two move me most:"Pretty girl. Long legs, short dress, tan. Blonde. Nice girl," David Crosby began. "She's walking in the mud barefoot and cuts her foot. Badly. Piece of glass in the mud. She's standing there on one leg, like a stork holding her other foot, bleeding quite a bit. People around her are going, 'Oh my God, what will we do?' And right over here is a New York State Thruway trooper and he looks like a photograph out of a book. He just came on duty. His pants got a sharp, crisp crease, his shoes are mirror clean."As the legendary musician recalled this 50-year-old memory, I pictured my grandfather, the cop who spent 1969 throwing longhairs into police cars in Milwaukee for no reason other than to stifle civil disobedience. 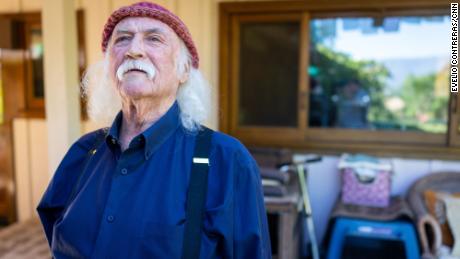 "He immediately walks in to the mud," Crosby continued. "Picks the girl up, gets the blood and the mud all over him … lays her in the backseat of the car. Gently! And then 14 hippies pushed that police cruiser out of the mud." Crosby's eyes glinted. "And you know, that worked for me."We are sitting in his home office as he told the story. The room was full of wine country breezes and pictures of Crosby, Stills, Nash and Young. The images hide the sad irony that the other members of rock's first supergroup are no longer speaking to him. Woodstock was CSN&Y's second gig and whoever was up at 3:25 a.m. on Sunday morning witnessed future Rock and Roll Hall of Famers with harmonies so tight that they seemed to be of one mind, voice and guitar. It wouldn't last.After decades of backbiting and tours filled with infighting, they played their last gig at the national Christmas tree lighting in 2015, after a cringe-worthy version of "Silent Night.""CSN will never play again," Graham Nash told me. "When you break that silver cord that connects deep friendship … it's very hard to put it back together. It's stretched out of recognition, and that's what happened. I don't want David in my life." 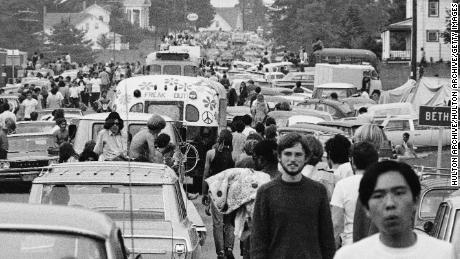 "We were all horrible to each other," Crosby replied when I conveyed the sentiment. "Many times. All of us. Unanimously. Me, probably more than anybody." He referenced the coke and heroin habit that put him in a Texas prison and how now, with eight stents in his heart, he's making music with a new generation — five albums in the last five years. But isn't their breakup a microcosm of what happened to the spirit of Woodstock? If the voices in those harmonies can't live conflict-free, what hope is there for the rest of us?"Those four guys were in conflict long before Woodstock and long after Woodstock," Crosby replied. "Woodstock was the bright shiny day. It was the exception, not the rule. "That's the thing to look at. Woodstock wasn't something that's let us down because it didn't fulfill its promise that we thought it had. Woodstock was a glimpse of what we could have."Which brings us to the story of Bobbi Ercoline."The smells," recalled the retired nurse in her tidy backyard in upstate New York. "Damp, moist mud, body odor, weed, campfires cooking, patchouli oil, Read More – Source

Reaching out for diversity

admin - October 7, 2018
0
Brett Kavanaugh, who faced multiple allegations of sexual misconduct, has been sworn in as a justice..

Facebook dating is now available in the US. Heres how it...

The Met Gala Is An Embarrassment To America

admin - May 8, 2018
0
The Met Gala is one of the most sickening events to take place in America. My disdain for this emba..