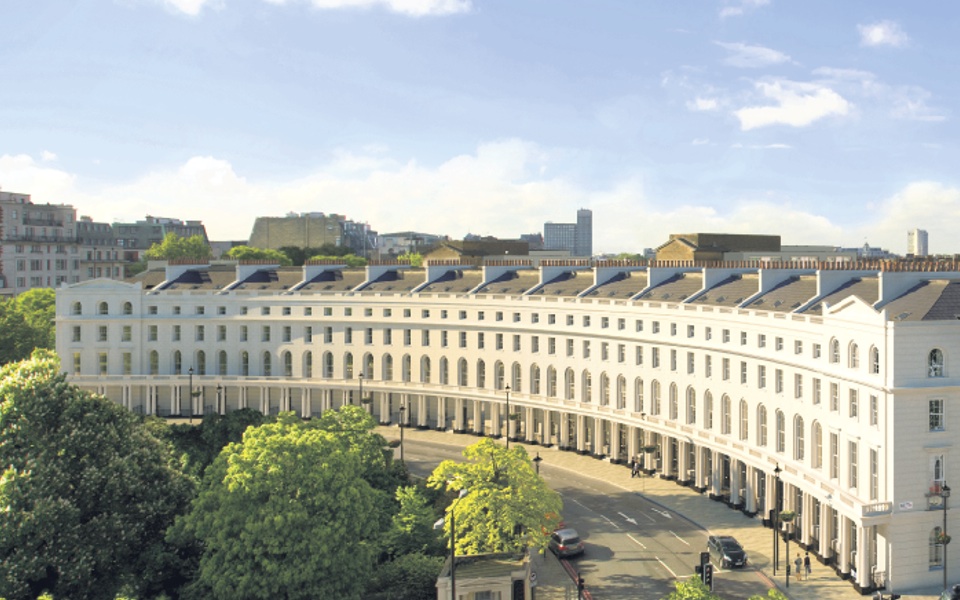 Its hard to think of a more enviable location in London to call home than Regents Crescent. With the 400 acres of Regents Park on your doorstep, extensive private gardens front and back, and the shops and restaurants of Marylebone just minutes away, the three-million budget you need to move in (and thats for a two-bed, not a studio) doesnt seem excessive in todays prime market.

But in a list of standout features, theres one particular attribute your visitors will be curious to hear all about – all 67 apartments (completing 2020) are grade-I listed, despite being entirely new-builds.

Just over two hundred years ago the architect John Nash was commissioned by the Prince Regent, later King George IV, to create homes for his family and friends. What became Regents Crescent was originally conceived as a circus, but only half of it – a crescent – was built by Nash, with an east and west wing. The west wing was badly damaged during the Second World War. Despite being a wreck, it was grade-I listed in 1954. In the 1960s it was redeveloped as offices behind an imitation facade, retaining its listing because of its significance.

Fast-forward to this decade and permission was granted to demolish the entire west wing so it could rise again as a more faithful recreation of Nashs Regency masterpiece.

Voila! A grade-I listed new-build that, according to Mike Dunn of Historic England “recognises the importance of the Nash development to the history of London town planning”.

The developer, CIT Group, is working with PDP architects to ensure compliance with all listing consents and regulations using modern engineering. For the private gardens, Bowles & Wyer has referenced the design and planting character of Regents Park, and, for the interiors, the international studio Millier has celebrated the elegant proportions of Georgian rooms and the periods architectural grandeur, while incorporating the best of modern technology.

The marketing suite is within one of the apartments, and dressed in a soft palette of whats termed modern luxury – neutrals, with points of interest added through rugs, cushions, lighting, vintage pieces and art.
Helen Westlake and Alexandra Nord of Millier have chosen a base-build that respects the Regency era yet blends in subtly contemporary touches. Herringbone timber flooring, veined marble and ornate plaster moldings are complemented with solid burnished bronze ironmongery and contemporary lighting in airy rooms that have ceiling heights of up to 4.2 metres.

Boston’s ‘Straight Pride Parade’ is one step closer to happening

For ‘Breaking Bad’ and ‘Downton Abbey,’ ‘the end’ wasn’t

admin - April 5, 2019
0
It would be too easy to dismiss Mallorca as simply a package holiday destination crowded with ex-pat..