Much has been made of the Oscars' remove from reality, perhaps rightly so. Again, this year, the Oscars largely failed to recognize women and people of color despite calls from the public to honor their work. But the truth is, the Academy has always made weird, sometimes wildly divisive choices. We'll clue you into a few of the award show's open secrets.

Oscar is just some guy

The gold-plated, unclothed man isn't named for anyone famous. A staunch foot tall and 8.5 pounds, the statue was nicknamed for the relative of someone in the Academy of Motion Picture Arts and Sciences. The way the Academy tells it, former Academy librarian Margaret Herrick said the statue looked like her Uncle Oscar in the first few years of the awards' existence. The nickname wasn't officially adopted until the 11th ceremony in 1939. Oscar's real name is "the Academy Award of Merit," but that's 17 letters longer and thus, excessive.

During World War II, some Oscars were made with painted plaster rather than the usual solid bronze and 24-karat gold to account for metal shortages. Winners that took home the makeshift Oscars could later trade them in for the real thing.

You can go to the Oscars if you're not famous

It's less exciting than it sounds. The Oscars recruits seat fillers, typically friends of industry insiders or relatives of PricewaterhouseCoopers accountants (who oversee the vote counting), to fill seats and not much else. The Oscars ceremony is long, and celebrities, like us regular folk, need to use the restroom. But if they're not in their seats when the commercial break ends and the camera scans across the Dolby Theater, seat fillers scurry into their empty spots to give the appearance that the room is full.There are a few strict rules seat fillers must follow, according to Monica Enriquez, a seat filler of 15 years. They're required to abide by the glamorous dress code, and sometimes they're told not to speak to celebrities unless the celebrities instigate conversation. Imagine sitting next to Meryl Streep and staying silent. That is excellent acting.

Accountants play a major role in the Oscars for some reason

Ever see those accountants from PricewaterhouseCoopers on stage and wonder … why? What's accounting got to do with film? 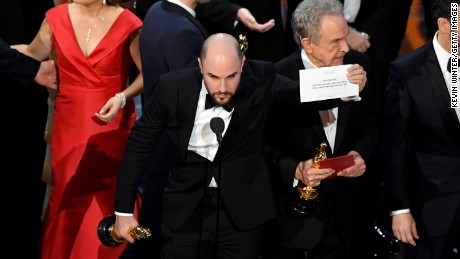 According to Variety, PwC counts all the ballots, oversees Academy elections and does its taxes. The Academy is a non-profit, so the accountants charge it a lower fee. In return, PwC gets free publicity and appears on the telecast. But they also took the fall for the infamous 2017 Oscars moment that saw "La La Land" mistakenly announced as the Best Picture winner over "Moonlight." Turns out it was an envelope mix-up.

Chalk this one up to Hollywood lore. Acclaimed author Susan Orlean claimed in her book on the famous film dog Rin Tin Tin that the German Shepherd accrued the most votes for Best Actor in 1929, but the Academy chose to honor the German human, Emil Jannings. The Wrap, an entertainment magazine, disputed this — in its analysis, the Rinty story was likely a joke that evolved into an industry legend decades later. After all, can a dog be recognized for the same depth of emotion that a human actor could convey? What would an Oscar for a dog even look like? How would RRead More – Source

Who is Emilia Clarkes new boyfriend Charlie McDowell and when did...

admin - October 25, 2018
0
Charlie McDowell has made no secret of the fact he is dating Emilia Clarke (Picture: C Flanigan/Film..