After an Iranian-American fashion blogger was grilled on live TV about her heritage, she fired back with a biting critique of the US. She told RT what her interview reveals about attitudes towards Muslims in the West.

Hoda Katebi, 23, was originally asked to come onto Chicago’s WGN News live morning show to talk about her book, ‘Tehran Streetstyle.’ But when she was suddenly asked for her views on Iran’s nuclear program, she responded that the US could not be trusted either, due to its history of meddling all across the world, including the Middle East.

One of the co-hosts of the show then suggested her remarks sounded un-American, to which she responded that, aside from foreign intervention, the US must also face up to its treatment of black people and Native Americans, and accused the host of pushing stereotypes.

“It definitely caught me off-guard,” she told RT. “Unfortunately I guess I wasn’t too surprised because Muslims and people of color in this country and across the West are constantly put in positions where we are seen as both the token [minority] but also supposed to talk about everything related to our identity, even if its not exactly related to the work we’re doing at hand.

We’re having to respond to our government’s policies abroad, but then having to blindly, unquestionably pray allegiance to this country who may be involved in violence in our country.”

Katebi said that being told by one of the TV hosts – the award-winning Robin Baumgarten – that she doesn’t “sound like an American,” puts into perspective the kind of discrimination Muslims and other minorities face in many Western countries.

“It goes back to the place that Muslims in America are constantly put in, in that we constantly have to prove we’re American enough to deserve respect, to deserve not being bond or banned,” she explained. “The second we criticize the state for what they’ve actually done we’re deemed un-American.” 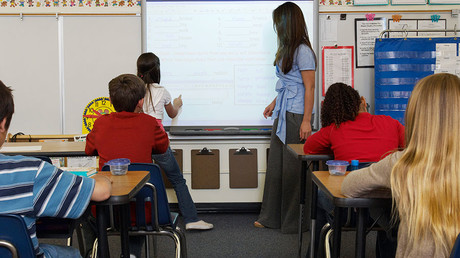 “Once you say something you’re going to get a bunch of death threats, you’re gonna get hate and the state might put a little microscope over you as well," she added.

Then again, Katebi noted, maybe being called “un-American” was actually kind of a compliment, as she does not “want to sound like someone who would vote Trump into office.”

While the fashion blogger is used to publicity, she was a little taken aback by how quickly the clip of her talking back on TV spread over the Internet. Although she felt “blessed” to receive so much coverage, she also felt the interview exposed the attitudes many in America have about Muslims.

“This is not just me this has happened to, I was just lucky enough to record it and share it online, but this happens constantly, every single day, all the time," she said. "One thing I appreciate about the virality of this is that people are standing up now and saying ‘this is not normal, this is not OK, we should not allow this.'”

American Music Awards had a lot going on

The Neato D7 is the Lamborghini of the vacuum cleaner world

admin - March 21, 2018
0
The man suspected of carrying out a series of bombings in Texas has died after blowing himself up in..