A devastating fire ravaged Frances Notre Dame Cathedral earlier this month, prompting worldwide heartbreak, commitments of rebuilding funds, and a vow to restore the structure from the French president. Meanwhile, the Notre Dame of Cyprus, St. Nicholas Cathedral, is used as a mosque in the northern part of the country, which has been illegally occupied by Turkey for nearly 50 years.

St. Nicholas, the most majestic structure in Famagusta, was constructed between 1298 and 1312 in the Gothic style. Kings of the House of Lusignan went to this church to be ceremonially crowned Kings of Jerusalem after they had been crowned as Kings of Cyprus in the St. Sophia Cathedral (now Selimiye Mosque) in Nicosia. (RELATED: French Government, Media Largely Silent About Huge Spike In Church Vandalism: Christian Watchdog Group Director)

However, the Cathedral was transformed into a mosque with the addition of a mihrab and a minaret and renamed the “Lala Mustafa Pasha Mosque” in 1954, after the commander of the 1570 Ottoman attack against Cyprus.

“In 1570 the Ottoman invasion which took Nicosia, then Famagusta, in hideous and bloody sieges, marked the end of the natural life of the edifice as a place of Christian worship,” according to Michael Walsh, a professor of art and archaeology.

“Inside it was denuded of all decoration and Christian referencing in keeping with Islamic attitudes on graven images and heathen idols in the house of God. Sculptures were removed, destroyed or disfigured. Relics, such as the Water Pitcher from the Marriage of Cana in Galilee, disappeared into history, and the Royal tombs of James II (1473) and James III (1474) were both destroyed.”

The Ottoman occupation of Cyprus lasted until 1878. Britain then assumed administration of the island, and annexed it in 1914, after the Ottomans entered the First World War on Germanys side. Cyprus became an independent Republic in 1960, and then a member of the United Nations and the European Union.

In 1952, Turkey joined the North Atlantic Treaty Organization (NATO). 22 years later, in 1974, Turkish forces invaded Cyprus once again, and captured the northern part of the island, which they illegally occupy to this day. 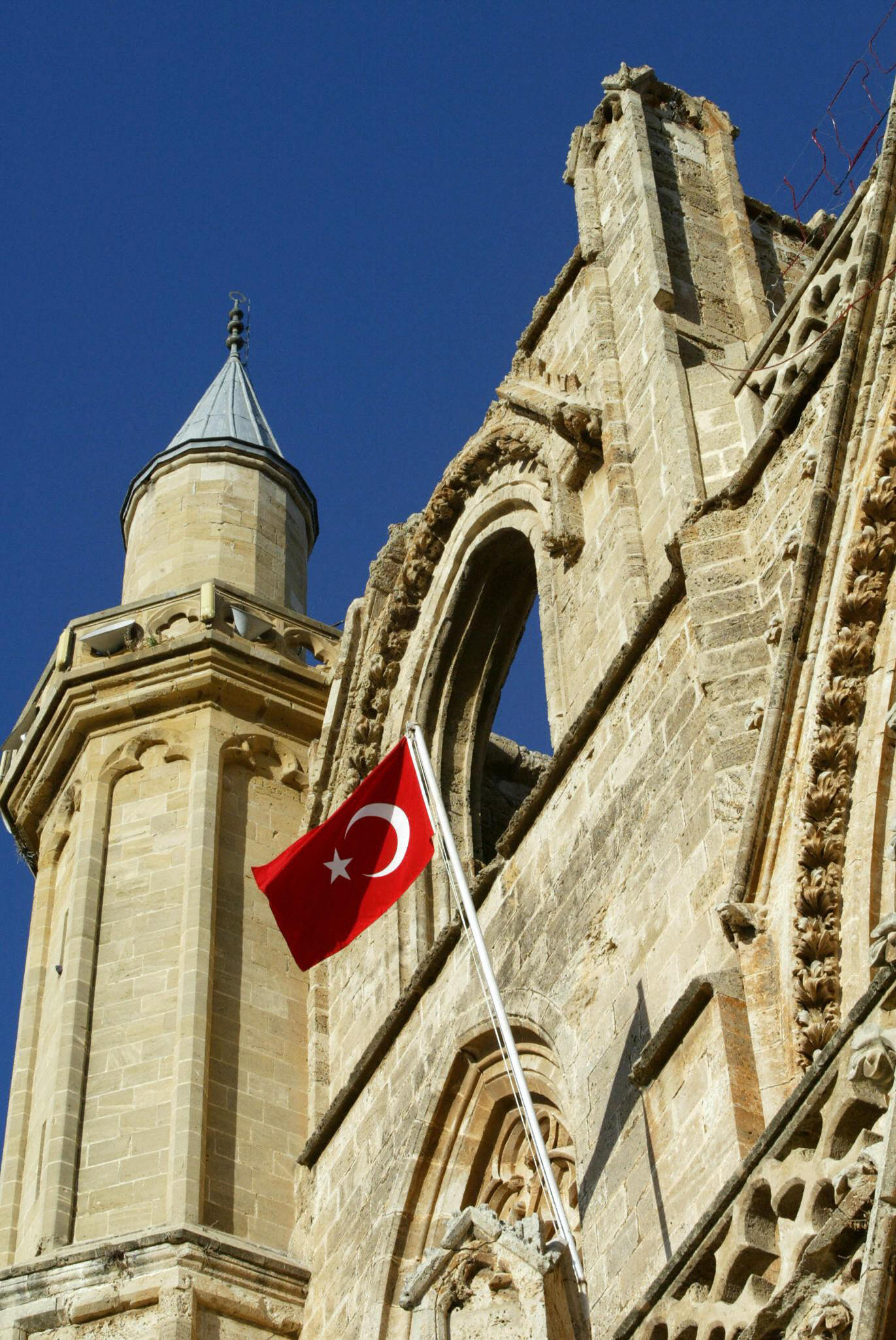 FAMAGUSTA, CYPRUS: A Turkish flag is seen on the Lala Mustafa Pasha mosque, once the cathedral of Saint Nicholas, in downtown Famagusta, 13 December 2003. (Tarik Tinazay/AFP/Getty Images)

During the campaign of invasion and ethnic cleansing, around 4,000 Greek Cypriots were allegedly murdered. The Cypriot government maintains that thousands of Greek-Cypriot civilians were arbitrarily arrested by the Turks, and many remain missing. The European Commission on Human Rights reported on the rape of several Greek Cypriot children and women, from ages 12 to 71, by Turkish troops. The nearly 200,000 Greek Cypriots who until then lived in the northern part of the country were terrorized by Turkish armed forces into fleeing their homes.

The lands, houses, businesses and other properties of the expelled or murdered Greek Cypriots were looted and seized by Turkish forces. The Turkish government then transferred settlers from Turkey to the occupied area, which had been majority-Greek Cypriot until 1974. Turkish settlers were then given homes and property belonging to Greek Cypriots as well as “citizenship” and “voting rights” in an attempt to forcibly change the demographic character of the island and Turkify it permanently.

A proof of this reality is that the names of every town, village or street has been changed to Turkish. For instance, Turks now call the Cypriot town of Trikomo “Iskele.” And the official website of the Turkish-occupied “Iskele Municipality” proudly lists the violated cathedrals, museums, harbors, castles, palaces, monasteries and other monuments in occupied Nicosia, Kyrenia, Famagusta and Morphou as “historical places” that should be visited by tourists. (RELATED: Andrew Brunsons American Pastor Describes Harrowing Turkish Courtroom Experience)

The devastation of the cultural heritage of the occupied territories in Cyprus is ongoing. According to the Cypriot Embassy in Washington, D.C. there is documentation on 68 churches in the occupied area that have been converted into mosques, along with 14 appropriated by the Turkish military and a dozen into stables or barns. Many more have been simply looted or destroyed.

It is not just Christian holy sites that have been destroyed, either. According to a 2012 report by Cypriot historic preservationists, “The historic Margo Jewish Cemetery, a national monument for the Jewish people, southeast of Nicosia, has been desecrated and destroyed in the same way as Christian cemeteries in the area occupied by Turkish troops have been desecrated and destroyed.”

“Through its illegal occupation of Cyprus since 1974, Turkey has continued with Ottoman-era practices which restrict and subjugate the practice of Christianity,” Claire Evans, of the International Christian Concern (ICC), told The Daily Caller. “Believers regularly report surveillance and harassment from Turkish authorities. The authorities, however, do not stop there.”

“Restrictions are placed on access to historic Christian places of worship and items commonly used in worship, effectively preventing Christians from publicly practicing their faith,” she continued. “We must not make the mistake of thinking of Turkeys religious freedom violations in Cyprus as an isolated incident. Turkey has a long history of using this tactic to demoralize and pressure Christians, keeping them as second-class citizens,” a tactic that includes converting historic churches into mosques. 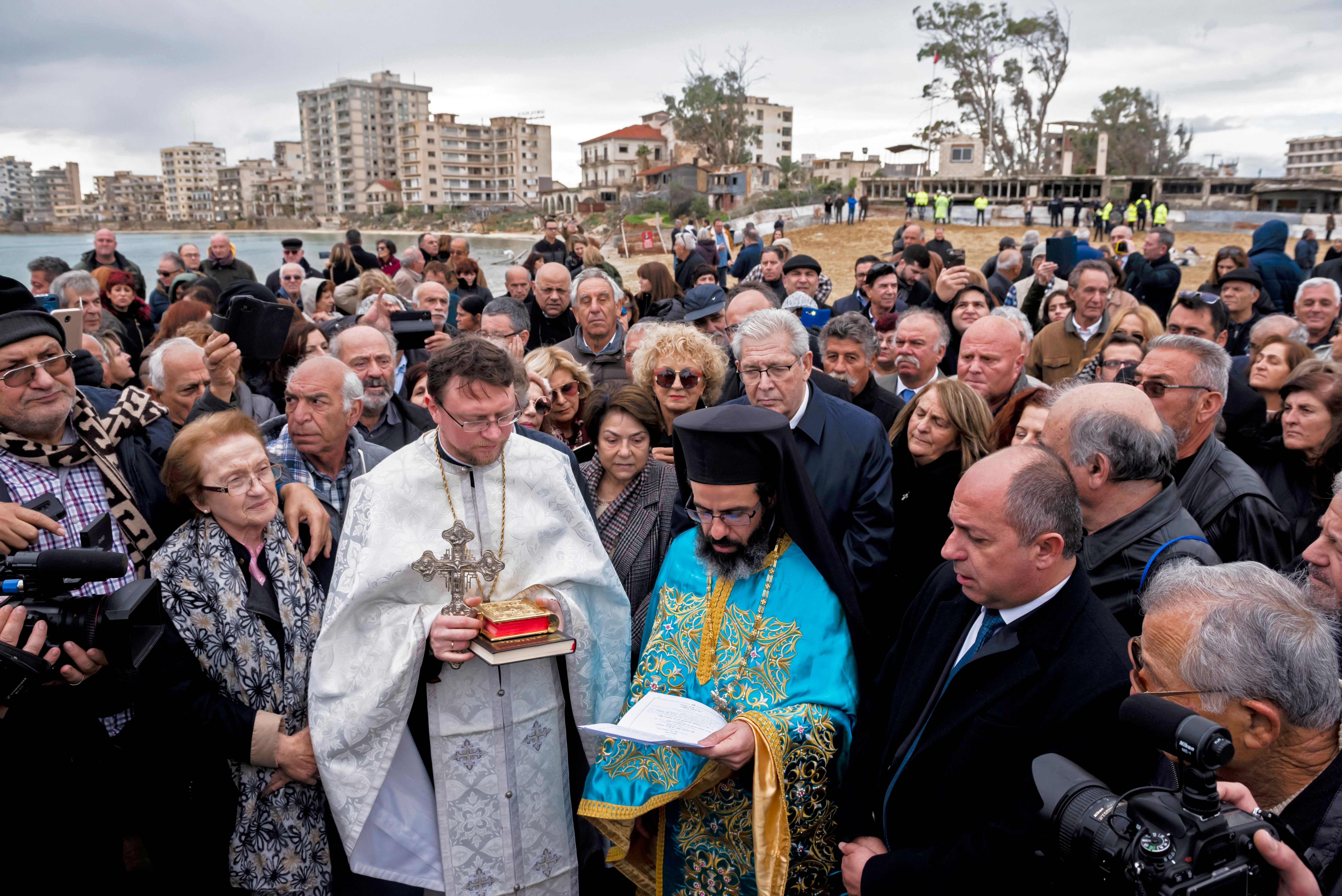 A Greek Orthodox priest celebrates a mass during the traditional “Blessing of the Sea” ceremony on Epiphany day in the port city of Famagusta, in the self-proclaimed Turkish Republic of Northern Cyprus (TRNC), on January 6, 2019. (Iakovos Hatzistavrou/AFP/Getty Images)

One of those who fled their homes to escape the Turkish military invasion of Cyprus in 1974 is Tasoula Hadjitofi from Famagusta. She was 14 during the invasion. Hadjitofi and her family eventually settleRead More – Source

Stephen Hawking’s theory on everything, in his words

BNP and EDL among far-right groups banned by Facebook

Arnold Schwarzenegger is one proud dad as he reunites with former...

How Fake News On The Worlds Largest App Is Causing Vigilante...

admin - April 11, 2019
0
When Mohammad Azams lifeless body was found on the side of the road in the Bidar district nine month..