State of Decay 2's marketing campaign is really stepping up now that the title has received a release date.

As part of a month-long coverage plan for the title, State of Decay 2 is seeing a lot of new information break over at IGN, with videos starting to reveal more about the title's gameplay.

The first video is a 25-minute walkthrough of the open world that features some elements of the title's exploration, as well as lots of the action you can expect from the title.

The footage is captured from a PC running 4K, but you can probably expect the same sort of gameplay on Xbox One X.

Bear in mind that whilst the video shows off action, gunplay and looting, there will also be management mechanics in the game – they're just not focused on here.

Take a look at the gameplay below.

IGN has revealed the release date and price point we can exepct to see State of Decay 2 release with.

Undead Labs will release the game on May 22 for the Xbox One family of consoles, and it will be a Play Anywhere title (which means you can play on Windows PCs, too).

Microsoft has also confirmed a price point of $29.99 USD for the game's standard edition, with a $49.99 Ultimate Edition also available.

The price – rouhgly half that of a triple-A retail game these days – has drawn some curiosity.

“Our goal is to build a long-term relationship with the State of Decay community and to foster deeper experiences with the franchise.

"We believe State of Decay 2 accomplishes this goal by immersing fans in the ultimate zombie survival fantasy, and we want to give more players the opportunity to join in and experience this unique game.”

State of Decay 2 – Xbox One

State of Decay is an action-adventure survival horror and stealth series developed by Undead Labs and published by Microsoft Studios.

The games emphasise survival via leadership skills in a post-apocalyptic zombie outbreak, pitting players not just against the roving undead, but diminishing supplies, survivor morale and more.

The sequel to the smash hit Xbox 360 game is set in an open world environment and features cooperative gameplay with up to three other players.

Co-operative gameplay is expected to be a large part of the title's appeal, and was the number one most requested feature from fans coming from the previous game in the series.

You'll be able to play with other players online or tackle the game yourself in solo mode. 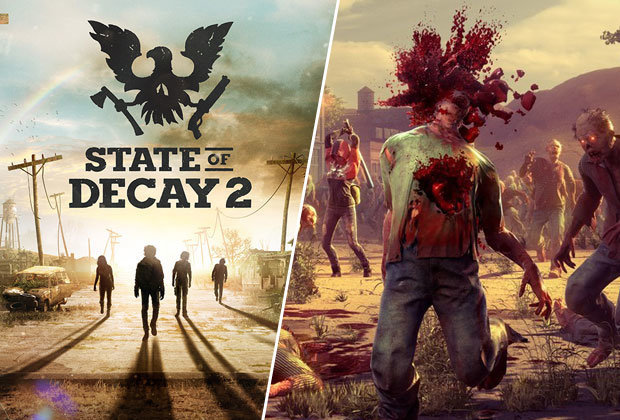 State of Decay 2 originally carried a release date of 2017, but that's been pushed back. Microsoft hasn't announced anything further about when specifically we can see the game in 2018, but it will release this year.

Additionally, the game will be available to play at no cost to Xbox Game Pass subscribers on the day of the game's launch, as with all forthcoming Microsoft Studios titles.

State of Decay 2 – What to Expect

The main revision to the gameplay this time around will be the inclusion of multiplayer in the game.

Developer Undead Labs has revealed a little information about what players can expect from the game in this regard, explaining that the game will not feature a persistent online world, nor will it be an MMO.

In an interview with IGN, Undead Labs founder Jeff Strain explained that the team are keen to give fans “exactly what they want”.

“This is not a session-based experience. It’s drop-in/drop-out,” Strain explained. “The key thing that I want everybody to know is, it doesn’t require you to be online. We’ve designed it very much with the intention of it being the easiest, most convenient type of multiplayer you can imagine”

"The next instalment in the critically acclaimed State of Decay franchise immerses you in an all-new, multiplayer zombie survival fantasy. Build a lasting community, working with other players or solo to overcome challenges while exploring your own unique story in a world that remembers the choices you make," says Undead Labs of its next game.

Undead Labs has stated the game will launch with three maps, and as you battle for survival in the world, you'll be able to move your resources from map to map – making it easier for you to prepare and defend against the undead threat.

“You should expect to see slightly different environments, definitely different landmarks and locations, different layouts lending themselves to different strategies, unique home sites, and even different mission types,” Undead said of its plans for including different biomes in the game.

Study: Mexicans No Longer Make Up The Majority Of Illegals Living...