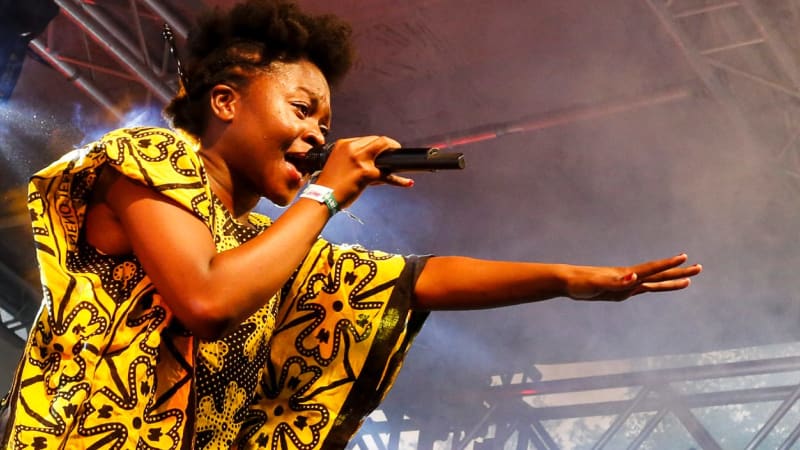 In March, she won the $30,000 Australian Music Prize for her 2017 record, Birds And The BEE9, over contenders including Jen Cloher and Paul Kelly. A few days later she wowed crowds at Womadelaide.

"I'm just the little girl from Zambia," she says tonight and later, laying her hand on her heart to tap its beat, a move she returns to like a musical reprise: "This is me. I am Sampa Tembo. I am Sampa The Great."

Her prize-winning album is played in full, each drop of its soulfulness and sass wrung out by a band, two backing singers and three dancers who my friend dubs "the black angels".

The performers are draped in variations of white robes and gold bling, bringing a glamorous evangelism into the incense sweetened air.

The aesthetic is earthy too with flowers tendril-ing up microphone stands, spilling along amps and arranged in a wedding-style arch. And as a bride's should, Sampa's outfit one-ups them all: an organza cape that fans out like a frightened frill-neck lizard with the translucence of a dragonfly wing.

Musically, the show is as the album is: an expertly-woven tapestry of African-influenced neo-soul and hip-hop, with moments of Portishead-edged noir, delivered by a band that rarely stops, providing a rumble of jazzy ambience when Sampa takes time out to preach her message of healing, self-love and proud black femininity.

"Change your scene if you ain't seen a black queen," she sings on Protect Your Queen – her words clear but never loud. Which is why, perhaps, it is Sampa who is the healer here. Because no matter how fierce her message is – and she has teeth, no doubt – she can make its blow feel like an embrace.

admin - January 4, 2019
0
EnlargeTechBargains Greetings, Arsians! Courtesy of our friends at TechBargains, we have another rou..

‘Dumbo’ gets Disney live-action parade off to high-flying start