A new photograph released by China's space agency shows its lunar rover, Jade Rabbit 2, making tracks on the soft surface of the far side of the moon.

The drive follows the successful landing of the lunar explorer Chang'e 4 on Thursday morning Beijing time (just before 2.30am GMT).

Just 12 hours later, the rover drove off onto the surface of the Earth's primary satellite.

"It's a small step for the rover, but one giant leap for the Chinese nation," Wu Weiren, the chief designer of China's Lunar Exploration Project, told state broadcaster China Central Television (CCTV).

"This giant leap is a decisive move for our exploration of space and the conquering of the universe," he added.

According to state media, the Jade Rabbit 2 rover has six wheels and is powered for six-wheel drive, so even if wheels fail others will independently continue.

The probe, containing a lander and a rover, was launched on a Long March 3B rocket from Xichang in the south of the country on 8 December.

Chang'e 4 and its three predecessors were named after a Chinese goddess, who legend says has lived on the moon for thousands of years.

Chinese state media said at the time that the area being targeted was the Aitken Basin, an impact crater about eight miles deep in the lunar south pole region.

Ten experiments were planned – six from China and four from other countries.

Among the experiments are planting potatoes and other seeds.

he rover will also test minerals and radiation.

The far side of the moon is still a relative mystery and communication is difficult because it always points away from Earth and this means signals can be blocked.

‘You never get over it’: Rosie Batty opens up to Andrew Denton

Women who live in the countryside start having sex earlier 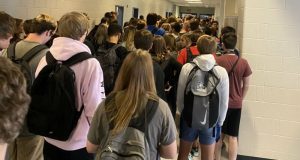 HS that suspended teen who tweeted photo of hallway has 9...