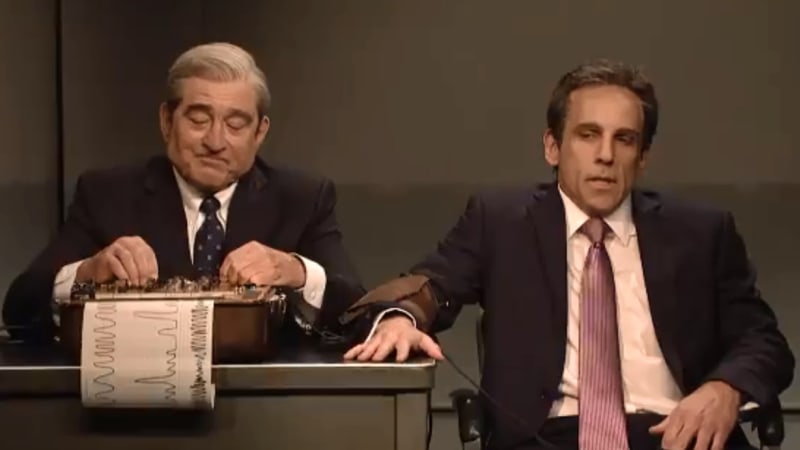 "In a couple of months, the president will be back to normal," Pence reassured Sessions.

"How's that?" Sessions asked. "Because it will be me," Pence declared.

Stiller's Cohen entered the room and complained: "This whole raid was a complete violation of attorney-criminal privilege." He then made a pitch for the president as "the smartest, kindest, sexiest, least-colluding man on this planet I call Earth."

They sent Cohen to another room. When Mueller walked in, De Niro had to pause for a minute as the audience exploded in applause.

He hooked Cohen up to the lie-detector machine and said: "I'll start with some easy ones. How'd you like that pee-pee tape?" – a reference to an uncorroborated allegation in the infamous Christopher Steele dossier. "What?" a surprised Cohen responded.

The pair then did some movie callbacks, as Cohen explained, "You can milk anything with nipples," a line used by his character, Gabriel Focker, in Meet the Parents. De Niro played Jack Byrnes, Gabriel's eventual father-in-law, in the three-film franchise, which includes Meet the Fockers and Little Fockers.

After listing Trump family code names, including "Two Fredos" for brothers Donald Trump Jr. and Eric Trump, De Niro's Mueller made a promise to Cohen: "Now, we're gonna catch all you Little Fockers. You got that?

Peter Kay pictured in public for first time in a year

War will go on despite US govt shutdown, Pence & Mattis...