Catherine, Duchess of Cambridge, right, follows the bride, her sister Pippa Middleton, after her wedding to James Matthews at St Mark's Church on May 20, 2017 in Englefield, England.Middleton, the sister of Catherine, Duchess of Cambridge married hedge fund manager James Matthews in a ceremony Saturday where her niece and nephew Prince George and Princess Charlotte was in the wedding party, along with sister Kate and princes Harry and William. (Photo by Kirsty Wigglesworth – Pool/Getty Images)

Pippa Middleton and her husband James Matthews are reportedly expecting their first child in October, the Sun reported Saturday.

Middleton, the sister of the Duchess of Cambridge, Kate Middleton, reportedly told family and friends about the exciting news after she had a 12-week scan last week. (RELATED: 20 Reasons To Celebrate Pippa Middletons Birthday [SLIDESHOW]) 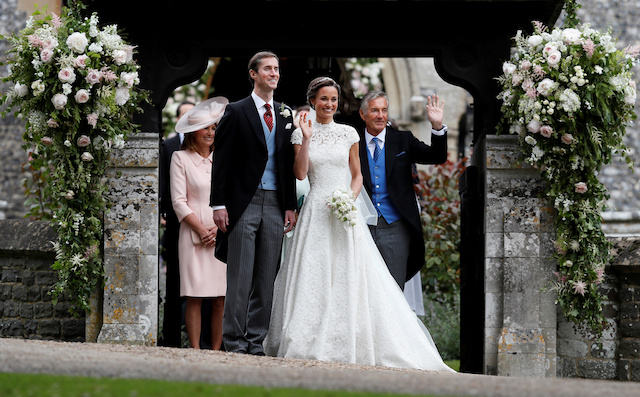 David Matthews (right) waves to well-wishers at the wedding of his son James Matthews and Pippa Middleton at St Marks Church in Englefield, Britain, May 20, 2017. REUTERS/Kirsty Wigglesworth/Pool/File Photo

“When Pippa found out she was pregnant, she was obviously thrilled and utterly overjoyed,” a source shared about the wonderful news.

The Duchess of Cambridge, who is just days away from having her third child, reportedly was one of the first people she told and was “delighted.”

“Naturally, big sister Kate [Middleton] and parents, Carole and Michael, were the first people she told– James aside– and they could not have been more delighted,” the source said.

The good news also comes after a difficult time for the family after Matthews father, David Matthews, recently was accused of rape. He has denied the allegations, calling them “untrue and scandalous,” according to the Daily Mail.

Middleton and Matthews tied the knot last May at St Marks Church in Englefield, Britain.

Dr Virginia Apgar: Who was American ‘saviour of babies’ honoured by Google Doodle?

Business must prepare for technological change

Property of the Week: Enter the Dragons Den in Hackney

admin - April 30, 2018
0
Deadpool star Ryan Reynolds has tweeted a photo of a letter from Iron Man refusing to let his charac..