The games live servers on PC have now gone offline as Bluehole prepares to update the game, as confirmed by the PUBG help Twitter account.

"PC players, our live servers are now down for maintenance and we expect the maintenance to last for 3 hours. Apologies for the inconvenience."

This shouldn't impact any early access Xbox One players in the meantime.

Likewise it's worth noting that although Bluehole have projected a downtime of three hours, it's possible this could be extended should the team require longer to finish the necesary maintenance.

• Refresh the page for the latest news.

ORIGINAL STORY – PUBG, otherwise known as PlayerUnknown's Battlegrounds is preparing to go offline on PC, as developer Bluehole looks to move the latest test build from the test servers to the live ones.

The news was confirmed by the official PUBG Twitter account on Wednesday afternoon, with details of when the game would be going offline, how long for and what changes were being made to the game.

The game on PC will be going offline from 6PM PST, which is 2AM GMT for anyone in the UK.

Bluehole predicts that this maintenance period could last for 3 hours, which would suggest the game will come back online at 6PM PST, 5AM GMT and 6AM CET.

This will be the sixth PUBG update to be pushed to the live servers since the game exited early access and gained it's PC 1.0 status.

In a past blog post Bluehole outlined what changes they were making with this sixth update, which outlined a series of bug fixes and measures to further optimise the game.

"More optimizations and fixes are being worked on and will be shared with you when they are ready."

The same blogpost also explained why Update 6 didn't come with the previously promised additional features for the game, which Bluehole says is a result of their efforts to curb cheating instead.

"Early this year, development of some of the major features and systems was delayed as our focus shifted towards tightening our anti-cheat effort. Also, due to other reasons, we have not been able to show you the team’s development roadmap for 2018.

"We would like to ask for our players’ generous understanding that despite the team’s eagerness to share what we have been planning and working on, the timing had to be changed.

"We do have a lot of exciting things that we want to share with you, including new content to provide more extensive battle royale experiences as well as improvements and modifications to create a deeper and more realistic gameplay.

"In March, the team will reveal what you can expect from us in the first half of 2018 in terms of our development and new content plans which, by the way, include a new map."

Keep reading to take a look at the patch notes for the latest update in preparation for when the game comes back online in a few hours time.

New free crate (MILITIA) has a 40% drop rate. Drop rates for previous crates are shown below 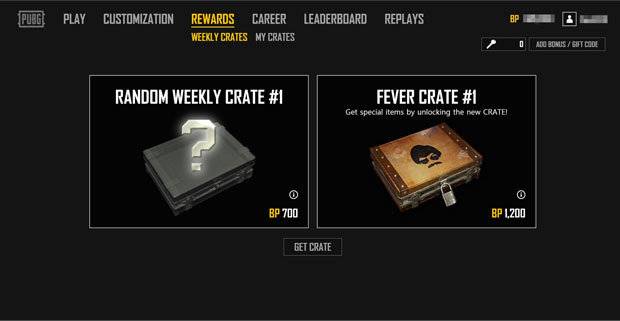 Trump orders audit of US Postal Service, after suggesting Amazon to blame its troubles

Rapper Drake apologises to Kylie Jenner for referring to her as...