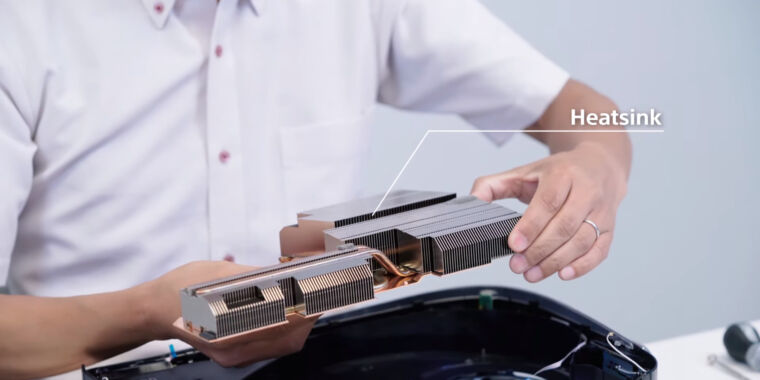 Earlier this month, Sony gave us the first peek inside the PlayStation 5 in the form of a teardown video that examined the upcoming console piece by piece. Now, Japanese specialty site 4Gamer has posted an interview with the Sony hardware design engineer featured in that video, Yasuhiro Otori.

That interview (Google Translate, ResetEra user translation) goes into a lot of nitty-gritty detail on the design decisions behind Sony's uniquely shaped console and focuses heavily on the unit's heat dissipation technology. One of the most interesting tidbits on that score is an apparent plan to "optimize" the speed of the cooling fan on a per-game basis via downloadable system updates.

"Various games will appear in the future, and APU [accelerated processing unit] behavior data for each game will be collected," Otori said. "Based on this, there is a plan to proceed with the optimization of fan control."

That performance analysis will be based on data sent from a temperature sensor on the APU and three others mounted on the PS5's motherboard, according to the interview (the highest measured temperature will be used to determine the fan speed). 4Gamer surmises this aggregate data may be particularly useful "when a game with a high load continues for a long time, [making it] possible to increase the rotation amount of the fan and enhance the cooling performance even at the expense of quietness."

In the interview, 4Gamer notes that the system's 120mm diameter, 45mm thick fan, which directs air to both sides of the dual-sided motherboard, "is quite large and thick for an electric fan mounted on a game machine." That allows for slower turning compared to a larger fan, leading to a "high degree of quietness… under normal usage conditions."

In the teardown video, Otori said the PS5's increased size led to "a dramatic improvement in terms of processing power and quietness" over the PS4. Initial hands-on reports from Japanese press confirmed that general impression, which should be good news for PlayStation owners used to loud system fans that spin like jet engines under heavy load.

Otori also addressed the PS5's unorthodox use of liquid metal conductor as a TIM (thermal interface material) below the CPU. That gallium alloy can be highly corrosive to the aluminum often used in heat sinks, though, so the PS5 has a silver-plated block to prevent corrosion where its heat sink meets the APU, Otori said.

Even with this unorthodox design, and even with the increased cost of the liquid metal TIM itself, the decision to use it helped lower the overall cost of the PS5, Otori said. That's because the liquid gallium TIM allowed Sony to get the same cooling performance from a cheaper heat sink.

admin - May 25, 2020
0
Paul Gilbert Anchondo was two months old when his parents died shielding him from a shooter at an El..

What is the Fortnite cube and where is it going?