Last week, the state's US Attorney called for an investigation into why some protesters were being taken by federal agents without badges and put into unmarked vehicles.Over the weekend, protesters pulled down barricades, moved them into streets, and attempted to light a building on fire. Sunday's demonstrations ended with protesters being dispersed with gas by federal law enforcement, the Portland Police said in a tweet. While the protests are now getting national attention, allegations of racism and calls for reform have long been a part of the city.

Why did the protests start?

The death of George Floyd at the hands of Minneapolis police officers in May was the spark that lit demonstrations nationwide, with tens of thousands demanding police reform, accountability and, above all, re-establishing that Black Lives Matter.In Portland, like so many cities across the country, demonstrations are calling for justice in the deaths of Floyd, Breonna Taylor, Ahmaud Arbery, Elijah McClain and countless other Black lives that have ended in violence.But what began as a call for justice and accountability has given way to a melting pot of demonstrations. Protests have ranged from peaceful Black Lives Matter marches during the day to unidentified protesters taking part in violent demonstrations that devolve into arson and vandalism. President Trump and other federal officials have characterized some of these events as the actions of "anarchists and agitators."Now weeks have gone by with officers and protesters clashing, resulting in injuries on both sides, vandalism, arson, and allegations of brutality. In the last week alone, at least 40 protesters were arrested on charges varying from resisting arrest to disorderly conduct, according press releases from the PPB.

A history of racism

Portland has long been a place where tensions between opposing demonstrators have been a source for conflict. In recent years, some protests have become a target for hate groups seeking to antagonize other people who come out to defend the rights of marginalized communities such as immigrants, people of color and members of the LGBTQ community."History will tell you that it's a racist city, which it is and has been," said Sam Sachs, a community member who spoke during a press conference held by the Portland Police Association Sunday. "Oregon was created as White utopia."Oregon's complicated racial tensions start in the 1800's, with laws put in place to keep people of color out of the state. The 14th Amendment was not passed there until 1868, which given citizenship to Black people.In the early 1900's, the city's Board of Realty passed a "code of ethics," which prohibited realtors from selling homes in White neighborhoods to Black people. 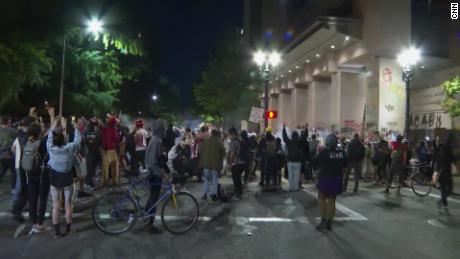 This hasn't been lost on the community. Sachs, whose family has been in the area since the 1940's, founded the No Hate Zone, — an organization which is focused on ending hate and racism through education, engagement and advocacy. While he said that right now Portland is known as a "hotbed for violence," it is also "a city of opportunity.""(It's) a city of love. A city of growth. A city that cares about its police. A city that cares about its Black and indigenous community members, gay, lesbian, transgender, cares about everyone. Portland is a city of love and hope."Many other community members who spoke echoed his sentiments and decried the violence that has come with the calls for justice.Pastor J.W. Matt Hennessee, who was also present during the press conference, said while he understands that citizens are tired of the brutality they see at the hands of police, he's tired of the violence, division and continued racism he and his community have faced."You want to know what tired looks like, ask us what tired looks like. Because we are the ones who couldn't purchase a house or rent a place anywhere near a certain place because nobody wanted people like us to be in it. We couldn't go to this school or that school or we couldn't do a number of different," the pastor said."It's very important that we come together, and I'm not as concerned about what we are tired of, I'm very concerned about the world thaRead More – Source

Goo Hara’s brother begged her to be strong after her close friend Sulli died...

Michelle Obama: I Am A Forever First Lady

This bromance could be EU’s Trojan horse

admin - September 3, 2018
0
After their rendezvous on Tuesday in Milan, the staunchly anti-migrant Orban described Salvini as hi..