“We pray for you often, as a family,” Brunson told the president as he asked if he and his wife, Norine, could pray with him. “My wife and I pray for you.”

US pastor Andrew Brunson prays for US President Donald Trump as they meet in the Oval Office of the White House in Washington, DC, October 13, 2018. (Photo by ROBERTO SCHMIDT/AFP/Getty Images)

After thanking them, President Trump jokingly asked who they voted for.

“I would like to say that I sent in an absentee ballot from prison,” Brunson quipped as the crowd laughed.

Brunson, a Christian missionary to Turkey originally from North Carolina, was arrested in October 2016 and accused of aiding terrorists through the church he operated with his wife. Convicted and sentenced to three years in prison, Brunson was released for time served and allowed to leave Turkey, returning home on Friday. (RELATED: Pastor Andrew Brunson Kisses American Flag After Being Freed)

During their White House meeting, Brunson thanked Trump and his administration for their role in securing their release. 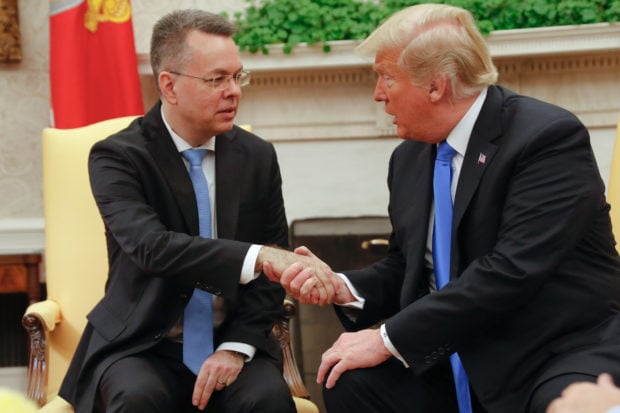 “This is a time to thank the administration and people in government who supported us,” Brunson told reporters Saturday. “We love this country. Last night we arrived in Germany on a plane that President Trump sent to take us from Turkey. And the Ambassador to Germany met us there at 1:30 in the morning, I couldnt believe it. And he had an American flag to give us that had flown over the embassy in Berlin. And I took it and I very naturally just, I kissed it.”

How to Watch the Rockefeller Center Christmas Tree Lighting

11 people are arrested after a demonstration outside a federal building...