Former President Barack Obama and other Democrats wont comment on allegations levied against gubernatorial candidate Steve Sisolak by his ex-wife, including one that the Nevada Democrat bruised his former spouse.

Lori “Dallas” Garland told The Daily Caller News Foundation that she felt like “a total prisoner” throughout her 13-year marriage with Sisolak, and said the single-father backstory he has leveraged throughout his gubernatorial campaign is “bull.” Garland also said Sisolak bruised her neck in an August 2000 incident.

TheDCNF reviewed pictures of Garlands bruised neck and a contemporaneous diary entry detailing the incident. The Sisolak campaign provided sworn statements from the candidates daughters, who say the saw the event when they were children, denying that he assaulted Garland. (RELATED: EXCLUSIVE: Hes Running For Governor As A Single Dad, But His Ex-Wife Says He Treated Her Like A Prisoner, Bruised Her Neck)

Obama appeared alongside Sisolak at a campaign rally in Las Vegas on Monday, along with senatorial candidate Jacky Rosen, congressional candidate Susie Lee, and lieutenant governor candidate Kate Marshall. None of the Democrats returned repeated request for comment regarding the allegations.

TheDCNF first reported Garlands allegations against Sisolak the Friday before the rally.

Rosen issued a blanket statement on Twitter in September to “Believe women.”

Sisolak stands to be Nevadas first Democratic governor in 20 years if he wins a tight race against his Republican opponent, Adam Laxalt.

A spokesman for the Republican Governors Association similarly called the allegations “disturbing.”

The Sisolak campaign did not deny that a physical altercation occurred between Garland and Sisolak in August 2000. The campaign provided sworn statements from Sisolaks two daughters, Ashley and Carley Sisolak, who were, respectively, 13 and 10 at the time.

Their statements, put together, share similarities with the account Garland detailed in her diary, but said Garland was the aggressor and injured their father. 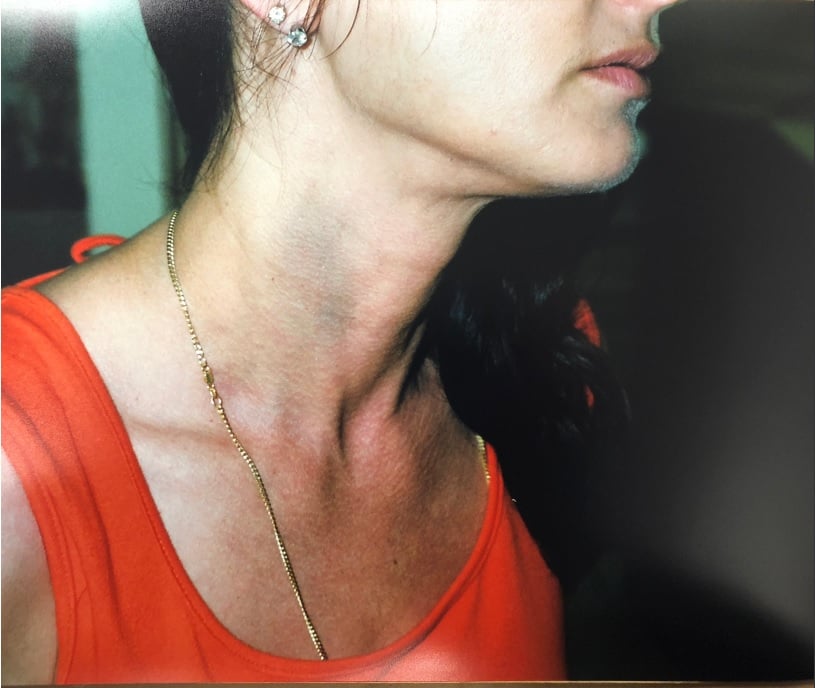 Photo Dallas Garland said was taken of her bruised neck the day after the Aug. 24, 2000, incident with Steve Sisolak. Courtesy of Dallas Sisolak.

Garland, whose legal name is still Sisolak, said the incident occurred on Aug. 24, 2000, the day after she moved out of her marital Las Vegas home. She said she had returned to her home to pick up her makeup, but Sisolak stopped her at the door.

Garland said there was no court order at the time that prevented her from entering her house.

She said she tried to force her way past Sisolak.

Garland said she and Sisolak pushed against each at the door for a few moments until her ex-husband suddenly “stumbled back on purpose and fell on the floor,” allegedly saying he was injured while yelling at their daughter, Carley, that she had to stay away from her “dangerous” mother.

Garland said Sisolak was 6 feet 3 inches tall and weighed over 200 pounds at the time of the incident, over double the weight of Garland, who was about 100 pounds. She denied forcing Sisolak onto the ground.

Garland said Sisolak drove a wedge between her and her children and said that it has been 10 years since she has seen either of her daughters. But she added that she had an active role in her childrens lives until they had both had graduated high school.

Sisolaks daughters have appeared in two campaign ads with their father, both of which frame the Democrat as a single father.

Garland and four of her longtime friends said Sisolak tried to drive a wedge between her and her two daughters following their divorce. All four of Garlands friends refused to speak publicly for fear that Sisolak would use his position as chairman of the Clark County Commission to retaliate against them or their family.

Sisolaks political ads “make me sick,” one of her friends told TheDCNF. “He acts like hes a single man, and I tell people hes not a widower. She raised those children too. But people dont know that. Its such a misleading ad.”

King Of Thailand Marries His Female Bodyguard, Makes Her Queen Of Thailand

Turkey attempts to reset relations in Europe with meetings in France, Germany

admin - March 21, 2018
0
Sarkozy, 63, attended the questioning voluntarily on Tuesday, according to an official at the court...

admin - December 7, 2018
0
The U.K. is denying asylum to an endangered Pakistani Christian woman because they fear attacks on t..