Officer Ronil Singh, 33, pulled over the suspect just before 1 a.m. in a mostly residential part of Newman, a city of 11,000 located about 70 miles east of San Jose. "A few moments later he called out 'shots fired' over the radio," according to a news release from the Stanislaus County Sheriff's Department, which is leading the investigation. "Multiple agencies responded to assist, and Singh was found at the scene with gunshot wounds."Singh was transported to a hospital, where he was pronounced dead, police said. The suspect — who surveillance images show is a heavyset man with dark, closely cropped hair — took off in a silver or gray extended-cab Dodge Ram 1500 pickup, police said. In photos provided by police, he is wearing a zip-up hoodie with an Ecko logo on the sleeve and a thick silver chain around his neck. The California Highway Patrol described him as Hispanic. "Suspect is considered armed and dangerous and may be in possession of a firearm," the CHP said. The truck has a hood scoop and a paper license plate that says "AR Auto," according to CNN affiliate KOVR. Singh, a Fiji native, had been with the Newman Police Department since July 2011. 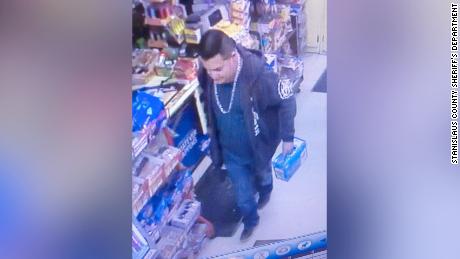 "Our Newman police family is devastated by the loss of Ronil," Police Chief Randy Richardson said, urging anyone with useful information to help investigators "get this cop killer off the streets."CHP issued a blue alert, initiated after acts of violence against law enforcement, for Stanislaus, Merced, San Joaquin, Tuolumne and Santa Clara counties.

Fortnite Dance on RVs Week 1 Challenge: Where is the Crown of RVs on...

admin - October 9, 2019
0
European conservatives are keeping up the pressure on Sylvie Goulard, Frances nominee for the next E..

Bullets flew for 4 minutes as armed deputy waited outside

Uncle catches boys as home burns. But his niece was too...