Lenovo's ThinkPad family has a lot of fans, but not everyone can spend ThinkPad money on a laptop. Designed for small business customers (and regular consumers who want a more privacy-focused machine), Lenovo's new Thinkbooks seem like an experiment to boil the essence of a ThinkPad down into its most important parts and put those pieces in a more affordable package.

On paper, it seems Lenovo has done just that: the new Thinkbook 13s has a stress-tested aluminum body, comfortable keyboard, webcam privacy shutter, fingerprint reader, and other things that you'd find on a ThinkPad machine. But the Thinkbook's attractive starting price of $734 truly helps it stand out as an option for anyone who wants not just a ThinkPad alternative but a relatively affordable Windows machine as well. 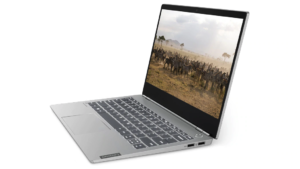 $734.30 from Lenovo (Ars Technica may earn compensation for sales from links on this post through affiliate programs.)

Lenovo tried to give a ThinkPad machine the "modern ultrabook" makeover, and the result is the updated Thinkbook. That's not a derogatory statement—the Thinkbook 13s is quite attractive, and I wouldn't guess that it's a notebook with a $734 starting price. It has a slate gray color scheme that uses a lighter gray color on its anodized aluminum chassis, a darker gray on its keycaps, and shiny accents on the edges of the trackpad and a few other locations. Overall, it looks most akin to an IdeaPad notebook with some design influences from the ThinkPad X lineup.

So you won't get the thin-and-light design that comes from a carbon-fiber ThinkPad X1 Carbon, but that's part of why the X1 Carbon costs $1,253 while the Thinkbook starts at $734. Nevertheless, the Thinkbook isn't painfully heavy at 2.95 pounds, nor is it too chunky with its 16mm thickness. It also makes the laptop large enough to fit one full-sized HDMI port and two USB-A ports on its sides, along with a USB-C port, headphone jack, and a power port. The only downside is that you have to charge the Thinkbook with the included power cable, as the lone USB-C port only supports audio, video, and data transfer.

The tube-like hinge allows the display panel to tilt back 180 degrees, but that's as far as it will go. The thick bezels surrounding its display, particularly the wide chin, also signal its place as a more affordable ThinkPad alternative. The panel options you have are also limited to just one, a 13.3-inch 1080p IPS non-touch panel, whereas you have FHD and 4K, touch and non-touch, and PrivacyGuard options on ThinkPad X1 laptops.

Above the display sits a webcam with its physical shutter. Simply move the textured slider to cover the webcam whenever you want extra privacy. Lenovo was one of the first OEMs to bring webcam shutters to most of its higher-end laptops and convertibles, and we're glad to see them make an appearance on the Thinkbook. Designed primarily for small business customers, the Thinkbook should have extra privacy features that regular consumer devices may lack.

A fingerprint reader provides an extra layer of security as well, and it's built into the power button that sits on the top-right side of the keyboard area. The button is surrounded by a glowing ring of light that gives it a more premium feel, while also letting you know exactly where your finger should go when you're trying to sign in using biometrics. The reader-button combo also supports one-touch power and sign-on, so one press of the power button with the correct finger will turn on the device and sign you in within seconds.

Ultimately, the Thinkbook is designed for people who are slightly more business-minded and privacy-conscious than the average person and who want a laptop that matches those requirements with standard features that other consumer laptops have as optional add-ons. The webcam shutter and power-button fingerprint reader are paramount among those, as are FIDO authentication capabilities and a discrete TPM that encrypts data. The only additional feature I'd want is Lenovo's PrivacyGuide screen protector, and that's because I often work from places that are not my home or a secure office. Unfortunately, customers who want the same thing will have to look to the ThinkPad family instead.

The assumption is that customers like these also want an attractive yet durable laptop, and the Thinkbook 13s fits that bill. It's not MIL-spec tested like ThinkPad devices are, but its aluminum chassis is sturdy, relatively lightweight, and attractive in an unassuming, professional way.

One of the best things Lenovo carried over to the Thinkbook from the ThinkPad line is the keyboard. It's not exactly the same as that on the ThinkPad X1 Carbon—it doesn't use the same underlying mechanism, and the keys have 1.5mm of travel—but it's still a great keyboard to type on. The keycaps are sufficiently clicky, giving you just enough tactile feedback with little noise. The keys are backlit as well, and you can turn on or off the backlight whenever you want by pressing Fn + Spacebar. Small business customers will also appreciate the row of hotkeys at the top of the keyboard that let you quickly answer or end Skype calls, among other things.

The Precision trackpad is solid. It's an average size for a trackpad on a 13-inch notebook; it's nowhere near as big as those on MacBooks, but not everyone needs that much trackpad space. The trackpad itself clicks even though it does not have dedicated right- and left-click buttons, and sadly there's no TrackBall on the Thinkbook. Admittedly, TrackBall support today is a luxury rather than a standard feature, and those who want it will have to look, again, to a ThinkPad machine.

Our Core i5 test model of the Thinkbook 13s has the same CPU, GPU, RAM, and storage that our 7th gen ThinkPad X1 Carbon review unit has (keep an eye out for that review coming soon). Both machines produced scores in the same range on our benchmark tests, although the X1 Carbon proved slightly more efficient than the Thinkbook 13sRead More – Source

Man Who Shouted Heil Hitler! Heil Trump! Did It Because Fiddler...

Search engine startup asks users to be the customer, not the...