The winners, however, offered what came across as a collective message — preaching unity while urging viewers to vote in the upcoming election, a point echoed by Regina King (a winner for "Watchmen'), Mark Ruffalo ("I Know This Much is True") and others. The show also repeatedly cited the need for togetherness and inclusion, showcasing the industry's diversity as well as the breadth of offerings available, at a time when TV has become a lifeline to viewers spending more time at home."The world may be terrible, but TV has never been better," said Kimmel, who opened the show with scenes of a packed, appreciative audience, before he revealed that he was actually performing in a near-empty auditorium."Of course we don't have an audience. This isn't a MAGA rally. It's the Emmys," the ABC latenight host said — the first of several jokes at President Trump's expense — later referring to the show as "The No People's Choice Awards." The awards themselves were a story of sweeps and near-sweeps. HBO's "Succession" snagged four of the seven drama prizes, "Watchmen" dominated the limited-series voting — amassing 11 awards overall, including seven claimed during earlier ceremonies in technical areas — and the final season of "Schitt's Creek" swept the comedy categories.That included Catherine O'Hara and Eugene Levy both winning, the first Emmys for the two comedy veterans since receiving awards for writing "SCTV" in the early 1980s. They were joined by Annie Murphy and Levy's son, Daniel Levy, who was recognized for writing, directing and co-starring in the Pop TV show. Including earlier technical awards, the show garnered nine Emmys overall."Succession" creator Jesse Armstrong, meanwhile, offered what might be the first "un-thank you" speech, singling out the leaders of the US and the U.K. as well as the media tycoons that enable them. The series, notably, is a tart look at a fictional family that bears a more-than-passing resemblance to Rupert Murdoch's media dynasty.Zendaya set the Internet ablaze by winning for the dark HBO teen drama "Euphoria," joining King and her "Watchmen" co-star Yahya Abdul-Mateen II and Uzo Aduba ("Mrs. America") among the people of color honored."Last Week Tonight With John Oliver" also won its fifth consecutive Emmy for variety talk series. Oliver noted how lucky those programs were to be able to stay in production during the pandemic, which has shut down so many scripted programs. "I will be reporting him to ICE tomorrow," Kimmel, a fellow nominee, quipped afterward about the British host.The 72nd annual Emmys mark the most significant award show to go on since the coronavirus pandemic ruled out the traditional everyone-together/black-tie events. Most of the other upcoming major awards, following the lead of the Oscars, have postponed their dates further into 2021.The producers of this year's Emmy telecast came into the ceremony with a plan to go "live, live, live," recognizing that there would be potential logistical problems — although there were few serious hiccups — and hoping for the best. That included dispatching 130 cameras to catch the reactions of nominees and winners scattered across the globe. 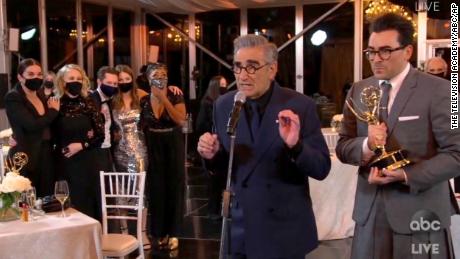 Your WhatsApp, Telegram media files could be hacked: Research

Royal wedding could end view of homeless from Queen’s bedroom