His picture is on the pew where he loved to sit. But Gilles Bikindou wasn't at Greenwood Forest Baptist Church in Cary, North Carolina, last Sunday. Or the Sunday before that. Or the Sunday before that. Or any of the Sundays since immigration authorities arrested him last month.This week, his pastor drove to Atlanta and stood outside the detention center where Bikindou was being held. She prayed that the officials who planned to deport him would have a change of heart. Bikindou has HIV, chronic kidney failure and diabetes. He'd already suffered health setbacks while in custody, the Rev. Lauren Efird said, and deportation to the Republic of Congo would be a death sentence."Without the life-prolonging medical care he can only receive here," she said, "he will die." Bikindou's case reflects a number of key issues emerging as the Trump administration steps up its immigration crackdown.Among them:• Detention of immigrants at regularly scheduled check-ins with officials• Concerns about medical care in detention facilities• The growing role of churches in protecting and advocating for immigrantsEfird knows Bikindou's case is one of millions.But that, she said, is just one more reason people should pay attention."It feels to me like he very much has gotten caught up in the system of an administration that's bent on showing no mercy," she said.If it happened to a member of her church, she said, it could happen to someone at yours, too.

Detained during a check-in with ICE

Bikindou, 58, came to the United States in 2004 on a cultural exchange visa, planning to study economic policy management with financial support from his country's government.The funding fell through, according to Efird, after Bikindou refused to testify in support of government officials in a trial over the alleged disappearance of hundreds of refugees.Fearing political retaliation, he sought asylum in the United States.He lost that bid in 2010 when a judge ordered his deportation. He was detained, then released on what's known as an "order of supervision." 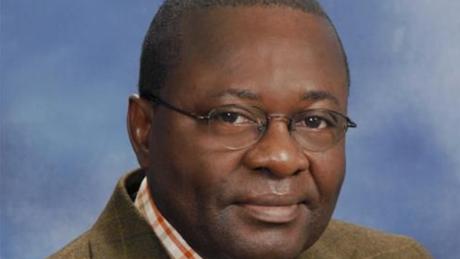 For nearly eight years, Bikindou checked in regularly with Immigration and Customs Enforcement as the order required. On January 9, he parked his car at his North Carolina church and headed to the ICE office in Charlotte with his associate pastor for what Bikindou expected to be another routine appointment. In a black and gray messenger bag, he carried paperwork asking ICE to block his deportation on humanitarian grounds, including a signed letter from his doctor saying the United States and Canada are the only places he can get the medicine he needs.Bikindou and the pastor walked into the ICE office together. The pastor walked out alone, carrying Bikindou's bag. "It was a surprise … I was in shock," Bikindou said in a telephone interview this week from the Atlanta City Detention Center. Officials, he said, had given no indication that he'd end up handcuffed when he came to his check-in that day."He's being treated as if they discovered he's a terrorist or had been convicted of a horrible crime since the last check-in, and none of those are true," said his attorney, Hans Christian Linnartz. "We have no clue why all of a sudden they've decided to lock him up." ICE says Bikindou was arrested because he had a deportation order on his record."Mr. Bikindou has been afforded full legal process in his case and was taken into custody based on a final order of removal issued by an immigration judge," ICE spokeswoman Tamara Spicer said in a statement. "ICE considers all humanitarian factors when making custody determinations and in the removal process."ICE says it focuses on people who pose a threat to national security, public safety and border security, but no one who's broken immigration laws is exempt from potential enforcement."All of those in violation of US immigration laws may be subject to immigration arrest, detention, and removal from the United States, if found removable by final order," the agency said.Immigrant rights advocates have accused ICE of focusing on "low-hanging fruit" rather than public safety threats. Detentions during check-ins are something immigration lawyers across the country have been observing with growing frequency, according to Greg Chen, policy director of the American Immigration Lawyers Association. "We continue to receive regular reports of this particular practice," Chen said.There are more than 90,000 people who, like Bikindou, were released from custody on orders of supervision and check in regularly with ICE officials, according to the agency.

Bikindou says getting the medicine he needs is a matter of life and death. It's something he fears will be impossible in the Republic of Congo. "I won't get the appropriate treatment. … I will just be dying slowly," he said.In filings submitted as part of the case, his doctor says Bikindou's HIV infection, diabetes mellitus and chronic kidney disease require a specialized combination of medication that isn't available in many developing countries. "Lack of access to safe and effective anti-retroviral therapy would present an immediate threat to his health and survival," Dr. Christopher Sellers wrote.Bikindou's health deteriorated during his weeks in ICE custody and he was hospitalized three times, according to his pastor. And at the Stewart Detention Center in south Georgia, one of several facilities where Bikindou was detained, it took two weeks for him to receive all the medication he required, Efird said. 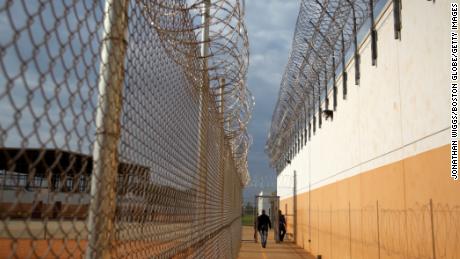 A report last year from the Department of Homeland Security's inspector general said detainees at Stewart had reported "long waits for the provision of medical care, including instances of detainees with painful conditions, such as infected teeth and a knee injury, waiting days for medical intervention."Asked to respond to advocates' criticism of Bikindou's care while in ICE custody, Spicer, the ICE spokeswoman, said detention centers are staffed with health care providers, and outside providers are used as needed."ICE takes very seriously the health, safety and welfare of those in our care," she said. But Bikindou's advocates argued that if that were the case, he wouldn't have been detained in the first place. For weeks after his arrest, they rallied to bring light to his story and fight his deportation.On Thursday, they learned their last hope at blocking it had failed. ICE officials denied Bikindou's request for humanitarian parole and said he would be able to get the treatment he needs in his homeland. "When Mr. Bikindou is removed, he will be provided with a copy of his medical records and an ample supply of medications to be used while he seeks a permanent treatment solution in his home country," ICE Field Office Director Sean Gallagher wrote, according to a copy of the letter reviewed by CNN. "There is no appeal from this decision."Bikindou's attorney is still fighting on another front: He's making a last-ditch effort to reopen his client's asylum case in court, arguing conditions in the Republic of Congo have gotten worse and that critics of the government are now at an even greater risk.

As she stood flanked by fellow clergy members outside the Atlanta City Detention Center this week, Efird described Bikindou as a "brother in Christ."Bikindou, she said, had a clean criminal record and did everything immigration authorities asked, all while working at a packing plant, continuing his studies and contributing to his community."We won't stand by and let our brother be treated this way. … We won't stand by and let Jesus be treated this way," she said. "Our church community will not be the same without Gilles in our midst." Her voice is part of a chorus of religious leaders increasingly speaking out as churches play a growing role in advocating for immigrants in their congregations.Dozens of people facing deportation have taken sanctuary in churches across the United States, according to a report released by activists earlier this year. Church leaders are also increasingly accompanying immigrants to court dates and ICE check-ins.

A call she dreaded would come

Efird's phone rang at 8 a.m. Friday with the news she'd feared.Bikindou told her he'd been awakened at 2 a.m. and flown from Atlanta to Washington Dulles International Airport. He was waiting for his deportation flight, ticket in hand, with an ICE officer at his side."He said it all felt like a dream," she said. "He sounds worried about what awaits him when he lands in the Congo. "I'm sure it did feel like a dream. They woke him up and made him disappear under the cover of darkness."Efird said she's still determined to keep fighting. Even after Bikindou is deported, she hopes an immigration judge will reopen his case and give him a chance to come back. After his arrest, leaders at Bikindou's church placed his photo and messenger bag in the pew where he always sat. Beside them they laid a red clergy stole that Efird says represents the Holy Spirit and justice.Each Sunday, Efird said, members sat next to the items in the pew and prayed for Bikindou's return. They will again this Sunday, this time with a heavier heart.As he waited to learn his fate this week, Bikindou said he'd also been praying -— that his story will send a powerful message, and that he'll be able to return to his home in the United States someday, even if he's deported. But most of all, he said, he prayed for the people from his church."I'm spiritually with them," he said, "even though physically I can't be."

Whatever you expect from “Robert Pattinson in space sci-fi,” High Life...

The Church Of Jesus Christ Of Latter-Day Saints Established 189 Years...

admin - January 3, 2019
0
Paul Whelan, 48, was arrested Friday in Moscow on suspicion of carrying out an act of espionage, Rus..