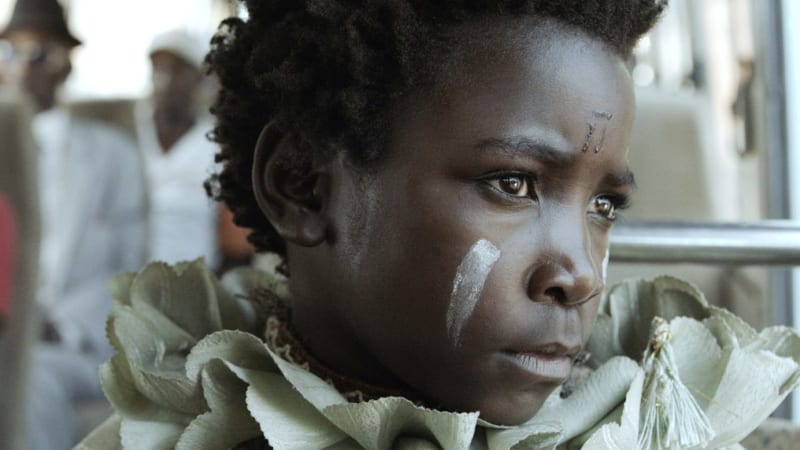 They're also a tourist attraction. In the opening scene a busload of foreign visitors view them as if they were zoo exhibits.

Nine year-old Shula (Margaret Mulubwa) is the star of the group. Seizing on her money-making potential, Mr Banda (Henry BJ Phiri), a portly government official with an eye to the main chance, totes her around the local court circuit, forcing her to "solve" criminal cases by using her non-existent powers of divination to pick the guilty out of a line-up of suspects.

The plaintiffs then express their gratitude with gifts, a few of which find their way back to the camp.

Nyoni's script was inspired by a series of witchcraft accusations made during a drought-stricken Zambian summer. Her subsequent research took her to Ghana and a 200 year-old witch camp which permitted her to observe its day-to-day routines.

She then embellished these with some extravagantly satirical flourishes of her own, such as the white ribbons. I'm not sure if the character of Mr Banda is based in fact but I wouldn't be surprised.

Despite the fantasy element and some overblown moments, many of them arising from the casting of non-actors, together with a soundtrack heavy with dollops of Vivaldi's Four Seasons, the film has a disturbing air of plausibility.

There are moments of powerfully bitter farce but we keep being pulled back to Shula, with her mutinous silences and enduring hopes of one day being allowed to go to school.

The ending may be understated but Nyoni's flair for crystallising the mood of a scene with a single image ensures she's not easily forgotten.