Sol Bechtold drove three hours to Butte County just to provide police with a DNA sample."I will do anything to find my mother," he told CNN shortly after he walked out of the sheriff's office. "I realize the outcome I pray for may not be the one I ultimately get."Bechtold normally speaks with his mother, Joanne Caddy, every weekend. He saw the smoke November 8 all the way in the San Francisco Bay area, so he turned on the news when he got home. He saw the main story and immediately picked up the phone to call mom."All I got was a noise on the line that sounded like a fax machine," he said, thinking he accidentally dialed the wrong number. "I realized the phone lines must be burned. I tried calling her neighbors and got the same noise." 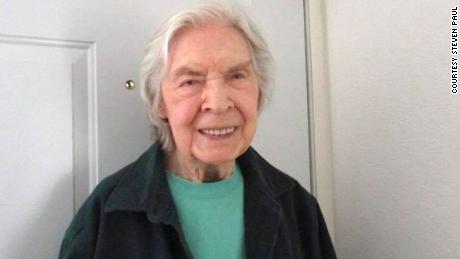 Delbert Mack saw the news, too. His sister, Dorothy Lee Mack, has lived in Paradise some 20 years. Two days after the fire, Delbert still hadn't heard from Dorothy.He, too, tried calling her home phone, and the Ridgewood Mobile Home Park where she lives. Neither number worked. "Her birthday is today," Mack told CNN on Friday. Dorothy, a cancer survivor, turned 88. Now, Bechtold, Mack and hundreds of other people wait for news — anything that will give them a molecule more hope.

'We're desperate to find an answer'

Even though their calls wouldn't go through, the families didn't stop trying. Bechtold would call his mother's numbers every now and then, just to test the phone lines; maybe a call would get through somehow. Mack and his family began calling people who live in the same mobile home park. In the immediate aftermath of the fire, they tried to speak with people still in the area, asking them to drive by Dorothy's property. In recent days, Mack's entire family has been calling hospitals, hoping that Dorothy had checked in. Both have joined Facebook groups organized to connect loved ones with people who are missing.A neighbor told Steven Paul, Mack's son-in-law, that she owes her life to Dorothy's property manager going around all the homes and telling people to leave.The only thing left of Dorothy's house at 6674 Pentz Road Space 19 is, "ashes and sheet metal." Her car is not there.Bechtold drove to Paradise and pinned up flyers with her picture at shelters. They called hospitals, shelters — anyone who possibly could help."We're desperate to find an answer," Mack told CNN. "Everyone in the family is anxious. And they're expecting me to give them positive information. I have no information to give them."

As the full extent of the damage came into view, with almost the entire town of Paradise reduced to ash, it was clear the Mack and Bechtold efforts needed to escalate with the filing of a missing person report.The Butte County Sheriff's Department says family and friends wanting to file should call 530-538-6570, 530-538-7544 or 530-538-7671. Callers must speak to a person, rather than leave voicemails.And they are urged to provide an update if they hear back from their missing loved ones."We are right now going off of people that have called in either welfare checks or to report someone missing," Investigations Sgt. Steve Collins told CNN's Dan Simon on Wednesday. "Those are the areas we are initially sending officers and deputies out to, to confirm whether structures are still standing or not." That's why it's imperative for missing people to be reported to officials. Even when reports are filed, it may take time for names to be added to the list.When CNN first spoke with the Bechtold and Mack families, their names had not yet been added. They are now."I need to know about her," Bechtold says. "One way or another." Thanksgiving is a week away, and it's been a week since the fire.They, like the other families of the hundreds missing in the Camp Fire, hope for any news — that their loved ones are still out there but can't get in touch.Whatever Dorothy needs, Mack said he wants his sister to know the whole family is ready to help. "I want her to know that I love her and I miss her," Bechtold said about his mother. "I really want her to come home."

Meet the Dutchman who cried foul on Europes tracking technology

Immigration Attorney Explains How Mother Of Anchor Baby Can Work The System To Gain...

The Notre Dame Of Cyprus, St. Nicholas Cathedral, Is A Mosque...

Sinister trailer for Haunting of Bly Manor looks like a classic...

Florida officer fired for his response during Parkland shooting will get...

admin - May 15, 2020
0
Sgt. Brian Miller and Scot Peterson were among the officers criticized and fired for their actions o..