In the digital fight against COVID-19, Big Tech squared off against governments — and won.

As policymakers around Europe pushed to develop smartphone apps to track the spread of the coronavirus, Apple and Google flexed their muscles by laying out conditions for building the tools, which are now set to be rolled out across the bloc and beyond by early June.

In conversations with more than 30 policymakers, data-protection experts, independent computer scientists and tech engineers from across the EU and United States, POLITICO pieced together how Google and Apple got their way, often playing hardball with politicians who have used their opposition to U.S. tech players to earn political capital with local voters. The companies also teamed up with longtime privacy campaigners — often those who have balked at Silicon Valleys collection of reams of peoples personal data — to push back against concerns about potential government surveillance.

In often fraught discussions, officials weighed the need to protect privacy against the public health imperative of tackling a virus that, so far, has left almost 300,000 people dead worldwide. Tech officials and privacy groups set aside longstanding feuds to figure out how to build COVID-19 apps, often condensing months of work into a few weeks. Politicians were left to decide whether to go it alone, often with tech offerings that left much to be desired — or team up with some of Silicon Valleys biggest names whose take-it-or-leave-it approach rubbed some the wrong way.

A German-led group pushed ahead with a toolkit, developed alongside 130 tech experts across eight countries, to build apps that could detect potential infections.

“Im not taking a stand against Apple and Google,” Cedric O, Frances digital minister, told POLITICO after publicly criticizing the companies for refusing to work with Paris independent coronavirus app. “Im saying that I dont want to be constrained by the internal policy choices of any company on a matter of public health.”

As governments grapple to bring the coronavirus to heel, the unlikely alliance between some of the worlds largest tech companies and global privacy groups is starting to bear fruit.

“We hope to harness the power of technology to help countries around the world slow the spread of COVID-19,” the companies said when announcing their initiative last month. Both declined to comment on their relationships with governments on creating smartphone apps, though senior engineers involved in the project stressed it was down to governments, not the companies, to determine which approach to use.

By June, national capitals from Berlin and Rome to Paris and London will roll out smartphone apps that use mobile technology to trace peoples interactions, informing local populations if they have been in contact with others infected with the coronavirus. Most of these programs, which may be in place well into 2021, rely on the approach championed by Google and Apple — often against initial proposals tabled by policymakers worldwide.

The ability of these tech companies to get their way, often with the support of local privacy and security advocates, has raised questions about the role of Big Tech in determining how governments respond to the global public health crisis. With apps soon becoming available that both rely on Google and Apples procedures, and those that dont, the confusion will hobble Europes strategy to coordinate its response across the 27-country bloc and elsewhere because the different digital tools cannot interact with each other.

“The interoperability of these apps has been a major blind spot,” said Michel Beaudouin-Lafon, a computer science professor at the Université Paris-Saclay, who co-authored a recent report on how these tools should operate. “From a technical perspective, it will be difficult to get these apps to talk to one another.”

Nowhere are these tensions more apparent than in Germany, home to some of the worlds longest-standing privacy protections.

Early last month, a German-led group pushed ahead with a toolkit, developed alongside 130 tech experts across eight countries, to build apps that could detect potential infections. Critically, the plan allowed for placing everyones data on a central server and giving epidemiologists and policymakers access to some of the information, to analyze how the virus spread nationwide.

Within days, the initiative hit a brick wall. With little, if any, communication with local experts and EU policymakers, Google and Apple announced on April 10 they had partnered on software which would allow government-backed apps to trace potential infections even while running in the background of peoples smartphones. The approach relied on data remaining, for the most part, on peoples devices. Both companies refused to open their technology to governments pushing for centralized data storage, a strategy they considered vulnerable to state snooping.

German privacy and security experts quickly jumped into action. Within often-heated WhatsApp conversations, some debated whether to throw their support behind Apple and Google. Others questioned if the companies efforts would cement their already dominant position in the smartphone market. But by late April, following similar warnings by international researchers from more than 25 countries, six influential civil liberties organizations sent an open letter to the German government, criticizing the storage of peoples data in one place and warning that it could lead to mass government surveillance. 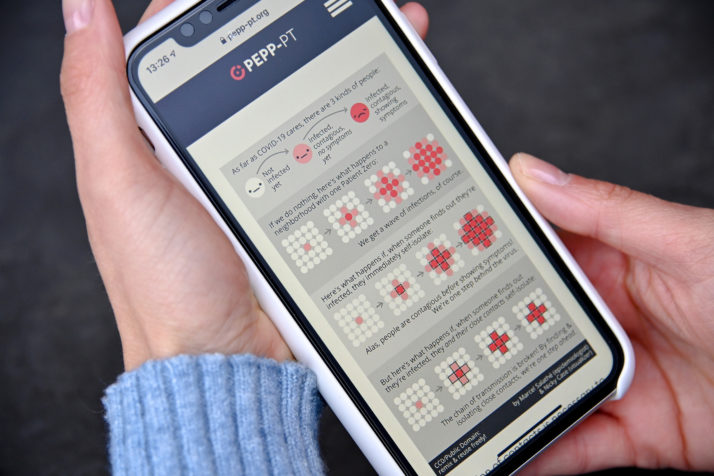 A German-led group pushed ahead with a toolkit, developed alongside 130 tech experts across eight countries, to build apps that could detect potential infections | Sascha Steinbach/EPA-EFE

Two days later, Chancellor Angela Merkels government intervened to ditch the initial German-led proposals in favor of those promoted by Google and Apple.

“The discussion among tech experts killed the credibility and trustworthiness of the technology,” a high-ranking German official told POLITICO. “Thats why we decided to go with the different approach.” Berlins decision was quickly followed by similar moves in Ireland, Italy and other countries as officials shifted to adopt a decentralized approach, realizing it would be better to partner with the tech giants, and the Germans, if these coronavirus apps were to take off across the EU. The European Commission stressed it is up to national governments to determine which app to use, but urged officials to find ways for the tools to communicate across borders.

The choice in Germany was made out of pragmatism rather than conviction — as well as a growing awareness that Berlin needed to work closely with Apple and Google to develop the app if engineers wanted to avoid serious glitches in their eventual digital tool, according to conversations with almost half a dozen German government and industry officials who spoke to POLITICO on condition of anonymity because the deliberations are private.

“We need to have a discussion on how Silicon Valley is increasingly taking over the job of a nation state,” said a government official. “But we dont need to have it amid a pandemic.”

Germany now plans to unveil its app, built by industry giants Deutsche Telekom and SAP, by mid-June, several weeks later than originally planned, in part because the tech giants will not release a key software component until mid-May, the same officials said.

France digs in its heels

While Germany ultimately sided with Apple and Google, France went the opposite way and ended up in an open confrontation with the tech giants.

Paris work started in mid-March just as Singapore was unveiling its own tracking tool. While the countrys interior minister said at the time that coronavirus apps were “not part of French culture,” O, the countrys digital minister, was already making plans with close advisers.

Experts at Frances National Institute for Research in Computer Science and Automation in March initially reached out to Apple — without the backing of the French government — with technical questions about how such a tracing tool could work, according to a person involved in those discussions.

By early April, officials had confirmed they were working on an app that would work by centralizing users data — an approach that had also been embraced by Germany, until Google and Apple unveiled their plans in mid-April. French experts close to those discussions told POLITICO that many involved in the project saw the centralized approach as being more privacy-friendly compared to storing data only on peoples phones.

Not everyone agreed. Amid an intense debate about potential government surveillance, several government coders who favored Apple and Googles plans were excluded from the so-called StopCovid app project, according to three sources with direct knowledge of the project.

France moved ahead with its app that, by the governments own admission, would not fully function on Apple and Google devices because it would switch off when smartphones were in sleep mode.

“We chose the centralized system because of data protection concerns and issues regarding interconnection with [our] epidemiological system,” O told POLITICO. Both the countrys privacy regulator and National Digital Council said that Frances plans complied with EU privacy rules, as long as appropriate oversight was in place.

Several people involved in the project said they were caught off-guard by Google and Apples announcement about the joint coronavirus app project. When they found out, many through the companies public statements, officials tried to convince them to lift technical restrictions on the French approach that would prevent the StopCovid app from working properly on almost all smartphones.

Aymeril Hoang, who sits on the scientific council advising the government on digital tracking, told POLITICO that he spoke repeatedly with Sébastian Gros, a government relations manager for Apple, after the April 10 announcement to persuade the firm to lift the constraints. His efforts were not successful. 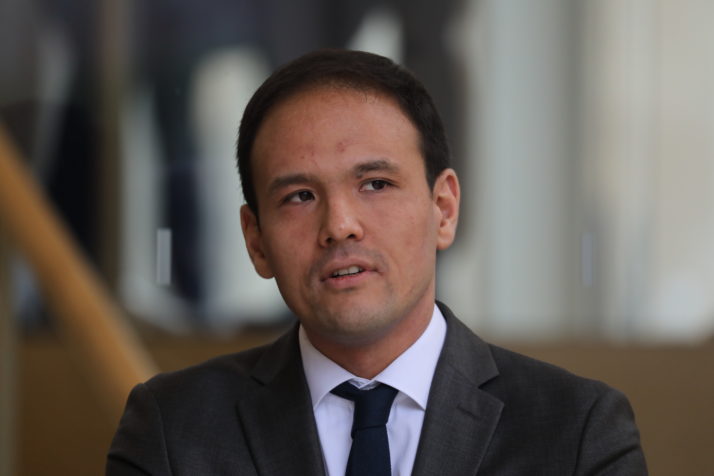 Despite that roadblock, France moved ahead with its app that, by the governments own admission, would not fully function on Apple and Google devices because it would switch off when smartphones were in sleep mode. That would be a major stumbling block to the apps primary goal of tracing all potential encounters with infected persons.

On April 20, O again urged the companies to work with officials to find a workaround. But his pleas were rebuffed when the tech giants reaffirmed they would only work on projects relying on decentralized data.

The digital minister, who was previously an adviser to President Emmanuel Macron, dug in his heels, refusing to bend to the decentralized approach. In particular, he told POLITICO that it should be up to governments, not companies, to determine whats best to protect citizens from the global pandemic.

With the country starting to come out of its nationwide lockdown, France now plans to roll out its app by June 2. But the standoff between Paris and Silicon Valley firms continues to divide privacy advocates and government regulators.

“We have a sort of statement of principle that Apple is putting forward that says this or that solution is more or less protective for users without there being any contradictory discussion on the issue,” Sébastien Soriano, head of the French telecoms regulator, told POLITICO. “Perhaps Apple is right and would be able to demonstrate that accepting certain protocols poses risks to its users. But there is no process for independent judges or authorities to decide.”

United Kingdom stuck in the middle

After an initial stalled response to the global public health crisis, London was eager to show it was on top of tackling COVID-19 — and quickly turned, in early March, to a potential smartphone tracking app that had proved successful in parts of Asia.

AR-15 And Counting: Check Out The Duggars Gun Closet In Their...

admin - December 31, 2018
0
"Numerous instances" of illegal drone activity at Gatwick led to the airport being shut in the run-u..