The series, titled "Homemade," features 17 short films that viewers can watch in any order. The five to ten minute shorts are meant to portray the shared experience of lockdown across the world.Directors were told they could use only equipment they had at home, with many shooting their films on their phone and using whoever they were quarantined with as actors. CNN spoke to three of the directors about their vision and execution.

'A classic set up'

Antonio Campos, who was directing "The Devil All the Time" when Covd-19 hit, switched gears to make a "Homemade" short.Called "Annex," in which a family finds an unconscious man on the beach and takes him home. The man begins to multiply, "much like the coronavirus," Campos told CNN. It was filmed in Springs, New York, near the ocean. "We live in Brooklyn and my wife and my one-year-old son, three days into quarantine we were already starting to feel claustrophobic," he said.They quarantined in March with a few other filmmaker friends, who also helped write and act in the movie. Campos said the process began over dinner, where the group would kick around about ideas."We have the house, we have us, and we have an iPhone, right?" Campos recalled. "So what can we do? We were near the water and we have this great actor, Chris Abbott. We started to sort of throw ideas around, like what if there was this guy who shows up at the house, this is kind of a classic idea, stranger shows up and then things get weird. That's just kind of a classic set up."He filmed it over the course of about a week, adding the shoot was "something that we had to do in between our day jobs." The group would look at footage at night, edit, and decide what was needed for the next day. "We also had our collaborators that were helping us remotely," Campos added. "We had a sound mixer that we had worked with, and then our composers who were composing music for my feature film, they took it and they ran with it. And then our color timer, that was a phone call. It became a little house kind of like a film factory."

"Bend It Like Beckham" writer Gurinder Chadha made her "Homemade" short, titled "Unexpected Gift," while quarantining in London with her husband and her 13-year-old twins, Kumiko and Ronak. She said she wanted to show quarantine from her kids' point of view. 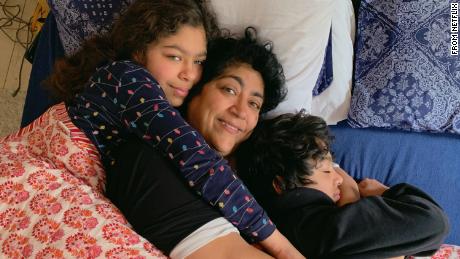 "[At first] I said, I can't think of anything worth making a film about in lock down, because everyone else is going through that right now and who wants to watch other people [do that]. So I declined then, but the next day my husband was sort of sat at the computer and the call from the company came and we had been in lockdown for about six weeks by then. And I film everything. And then what was becoming very clear was that it was about the kids and about the kids' perspective. And that's when the film came together."The short shows her immediate family spending time together, playing video games and cooking. "I had been shooting lots of videos with my kids from the start of lockdown, because I love to document them growing and changing. Our time during lockdown was incredible for our family and ran the gamut from joy and silliness to having to process family members dying," Chadha told CNN. "My editors in Italy were fabulous and we cut the film together remotely. We got it down to 12 minutes and Netflix was very supportive of filmmakers followinRead More – Source

SpaceX launched a Falcon 9 rocket Sunday that was historic for...

What’s on in the Canberra arts scene

Has Seungri escaped K-pop storm? Reports say he has been called...