Alleged ghost sightings may be scary enough, but some cases of claimed hauntings were so extreme they not only baffled authorities, they ended in death.

As Halloween stalks ever closer and the film industry churns out all manner of slasher and ghost stories, the public focus on the macabre and supernatural increases. For some, its a way to get into the spirit of the upcoming holiday, while others revel in the adrenaline of scaring themselves. For others, the experience of the supernatural is all too real. Up to 30 percent of Americans believe that theyve had contact with a spirit of the deceased, and several high profile places around the country are known for being hot-beds of ghostly activity.

Some hauntings, however, dont linger. Sometimes they end sooner but cut deeper than the stories and manifestations that make old houses and hotels the target of tourists and casual ghost hunters. They bombard homes or places of business with an unusual viciousness, scatter lives into disarray, then dissipate only to leave tragedy in their wake.

Here are two hauntings so horrific that some of those who experienced them did not survive.

The Unexplained Death Of Elisa Lam

The 2013 death of Elisa Lam at the Cecil Hotel in Los Angeles continues to defy explanation. Lam was a Canadian student from the University of British Columbia who visited California in early 2013. After visiting the San Diego zoo, she arrived in Los Angeles and checked into a shared room at the Cecil Hotel two days later. The hotel staff moved her to a single room two days after that when her roommates complained about her “certain odd behavior.” She contacted her parents every day, but on Jan. 31, the day she was scheduled to check out, she disappeared and failed to contact her family.

A taxi awaits a fare outside the Cecil Hotel in Los Angeles California February 20, 2013. The body of 21-year-old Canadian tourist Elisa Lam was found in a water tank on the roof of the hotel three weeks after she went missing, police said. The corpse was found February 19 after hotel guests complained of low water pressure. (ROBYN BECK/AFP/Getty Images)

Her family called the police, who searched for her throughout the hotel to no avail. Other than hotel staff, the only person who reported seeing Lam the day of her disappearance was Katie Orphan, the manager of a bookstore, who described Lam to CNN as “outgoing, very lively, very friendly.”

Authorities did not find Lam until Feb. 19, after guests at the Cecil complained about the taste and color of the hotels water. Some guests said the water ran black out of the faucets and had an “unusual” flavor. The police discovered Lams body in one of four 1,000-gallon water tanks on the hotels roof, accessible only by doors hotel staff had the access codes for, or by a fire escape. Hotel staff had to use a ladder to look into the water tank, prompting questions as to how Lam could have reached the heavy lid on top and then opened it herself. Her clothes were discovered in the water tank with her, and an autopsy revealed no evidence of foul play or significant intoxication. 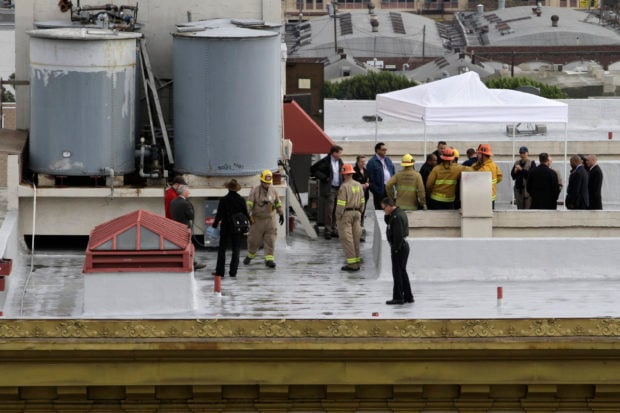 Authorities stand on the rooftop of the Cecil Hotel after a body was found in a water tank in Los Angeles, California, February 19, 2013. Police were trying to determine on Tuesday if a body found in a water tank on top of Cecil Hotel is that of a 21-year-old Canadian woman who went missing while staying there more than two weeks ago. Elisa Lam, a student from Vancouver, British Columbia who was visiting Southern California on her own, was last seen at the Cecil Hotel in downtown Los Angeles on January 31 and authorities had characterized her disappearance as suspicious. REUTERS/Jonathan Alcorn

Lam was known to have bipolar disorder and had been taking relevant, prescribed medication. Further complicating the case is surveillance footage of Lam on the day of her disappearance showing her appearing to hide from and interact with an unseen presence in an elevator that momentarily malfunctions.

While her bipolar disorder may have played a significant role in her death, her disappearance, the location of her body, the surveillance footage, and the hotels sordid history of unsolved murders and serial killer guests, led many to speculate that Lam was either possessed or was the target of a particularly malevolent haunting.

The Bell Witch Of Tennessee

The legend of the Bell Witch is one of the famous hauntings in all of Southern American folklore. It was featured in several newspapers in the mid-1800s and is said to have resulted in the untimely death of the Bell family patriarch and the calling off of a marriage between one of the bell Women and her fiance.

The alleged haunting began in 1817 when John Bell Sr. and his family came under attack from an invisible spirit that physically assaulted family members, displayed supernatural knowledge of secret acts and past events, threatened death, and apparently had a vast knowledge of Christian scripture and enjoyed religious debates.

The manifestations started with the appearance of strange creatures — a dog-like creature and an unknown but extremely large bird — that reportedly appeared on the Bells property. The haunting continued with the sounds of rappings and knockings throughout the house, the noise of chains along the floor, and the ruckus of a dog fight with no dogs to be seen.

Soon the situation became dangerous, and the spirit allegeldy targeted the familys children — pulling the sheets off of their beds, and slapping, biting, and pricking them. The spirit also targeted John Bell Sr., threatening to kill him. He was later found dead with an empty vial of poison which the spirit said, in a disembodied voice, that it had fed to him.

The harassment continued, as the spirit interrupted family mourners by singing raunchy drinking songs. It reportedly caused further damage to the family when, as a result of the constant harassment, Bertsy Bell called off her engagement to Joshua Gardner, of whom the spirit allegedly disapproved.

Explanations for the events suffered by the Bell family vary from demonic harassment to hoax and exaggeration, but Richard Williams Bell, quoted in An Authenticated History of the Bell Witch, said that all but the entitys evil nature remained shrouded in mystery.

Whether it was witchery, such as afflicted people in past centuries and the darker ages, whether some gifted fiend of hellish nature, practicing sorcery for selfish enjoyment, or some more modern science akin to that of mesmerism, or some hobgoblin native to the wilds of the country, or a disembodied soul shut out from heaven, or an evil spirit like those Paul drove out of the man into the swine, setting them mad; or a demon let loose from hell, I am unable to decide; nor has any one yet divined its nature or cause for appearing, and I trust this description of the monster in all forms and shapes, and of many tongues, will lead experts who may come with a wiser generation, to a correct conclusion and satisfactory explanation, Bell wrote.

There are other tales of hauntings that ended with the untimely deaths of the spirits alleged targets. Some, like the 2013 deaths of 10 men in a Thai village at the alleged hands of a widows ghost, are mired in political intrigue as the medium who drove the spirit away did so with a gesture that, intentionally or unintentionally, showed support for a past Thai government. Others, like the horror of Berkeley Square in one of Londons oldest homes, in which a ghost was so frightening that it allegedly killed several people by driving them mad or simply by scaring them to death then and there, lack enough credible sources to be considered as anything more than folklore.

Still, it is probably for the best that dead men tell no tales, as those who died amid these alleged hauntings may tell tales too horrible to bear.

Does Trump violate First Amendment by blocking users on Twitter? Judge to decide

Its National Coffee Day. Here Are The Best Coffee Cities In America

Volkswagen and Ford strengthen ties by teaming up on electric and...