Melania Trump truly represents the United States with grace, sophistication, and style with her one-of-a-kind outfits.

The former Slovenian model has dazzled on the world stage with her beautifully tailored and classy outfits. It is safe to say the first lady steals the spotlight with her designer pieces when welcoming foreign leaders to the White House or representing the United States abroad.

Trump has raised the bar for first lady fashion choices with the below 10 looks. 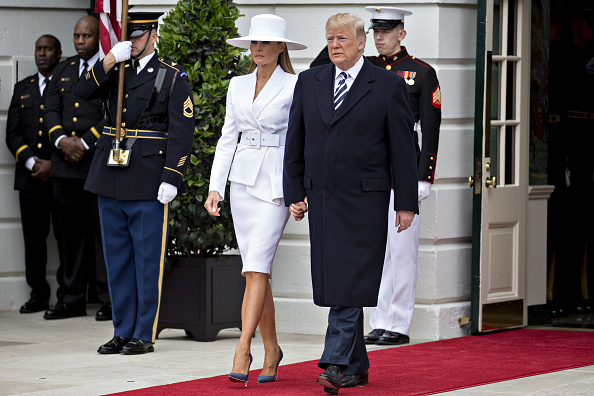 2. Melania Trump later changed into a custom-made Chanel couture dress for a state dinner with the Macrons Tuesday evening. In a perfect diplomatic gesture, Trump wore the silvery dress that included see-through black Chantilly lace, which gets its name from Chantilly, France, according to Quartzy. She paired the dress with her hair perfectly blown out and side parted hair. 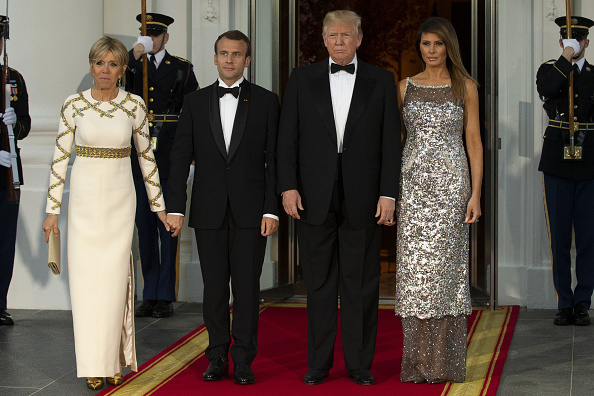 3. Melania Trump wore a stunning Chinese-inspired Gucci gown with pink fur sleeves during a state dinner in China on Nov. 9, 2017. The first lady accompanied her husband on his 12-day Asia tour. 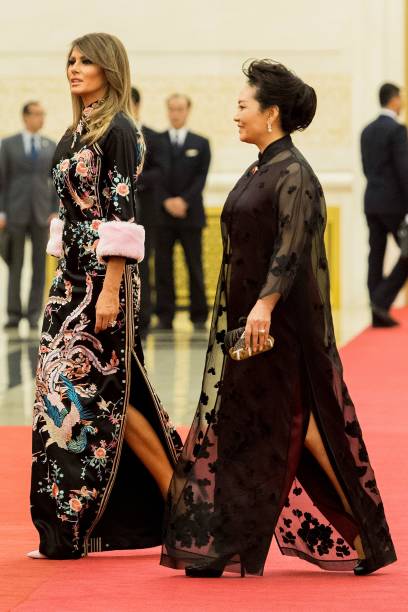 Melania Trump is pictured with Peng Liyuan at the Great Hall of the People in Beijing. (JIM WATSON/AFP/Getty Images)

4. Melania Trump wore a unique beaded jacket during the G7 summit in Sicily, Italy, on May 26, 2017. The jacket costs a whopping $51,000 and was made by Italian designers Dolce & Gabbana. 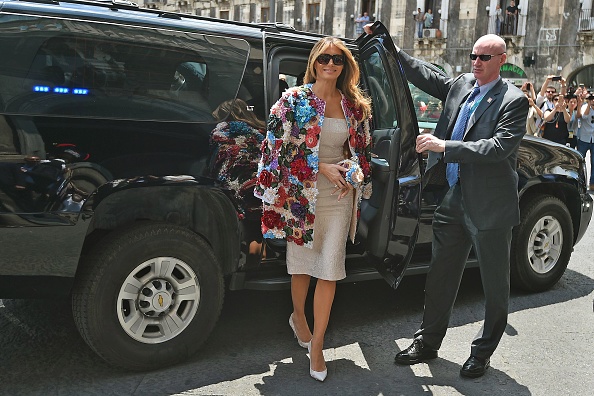 5. Melania Trump wore a stunning black lace ensemble during a trip to the Vatican to meet Pope Francis with Donald and Ivanka Trump on May 22, 2017. Melanias modest gown and black head covering were made by Dolce & Gabbana. 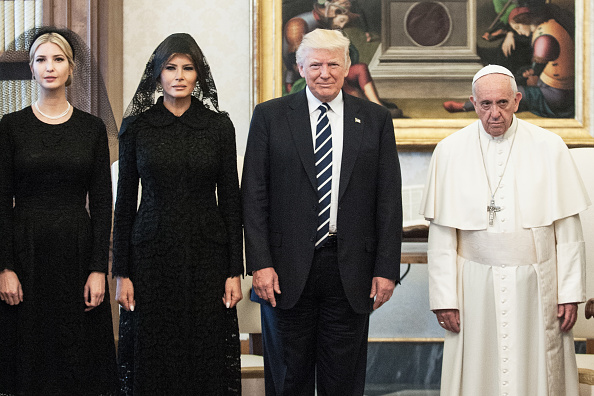 6. During the Trumps trip to Saudi Arabia, the first lady wore a simple but elegant cream suit, pumps, and black top ensemble that highlighted her statuesque frame. She wore this look at the Arab American Islamic Summit on May 21, 2017. 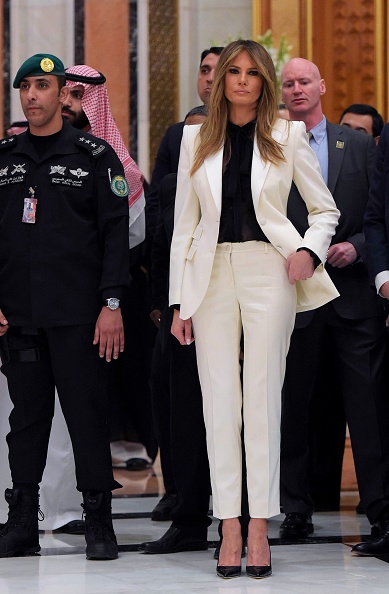 7. Melania Trump stunned in a black and white striped dress with white shoes during a trip to Palm Beach, Fla., on April 17, 2017. Mr. and Mrs. Trump met with Japanese Prime Minister Shinzo Abe and his wife Akie. 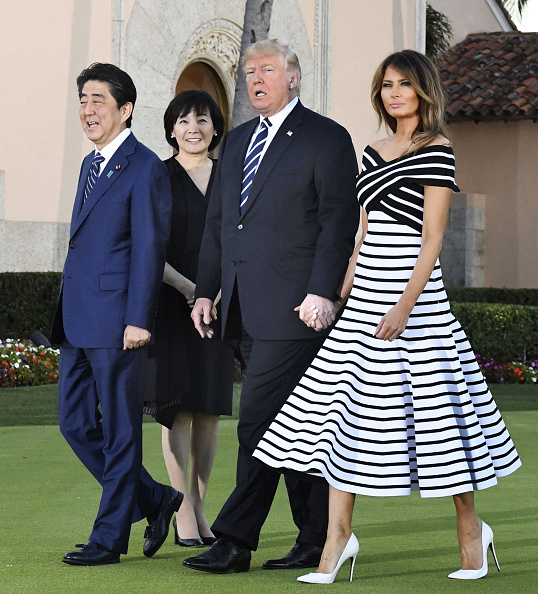 Melania Trump in a black and white dress in Palm Beach, Fla. (Photo by Kyodo News via Getty Images)

8. Melania Trump wore a plum coat by Delpozo during her husbands 12-day tour of Asia during a stop in South Korea on Nov. 7, 2017. The first lady paired that with blue shoes during the welcoming ceremony. 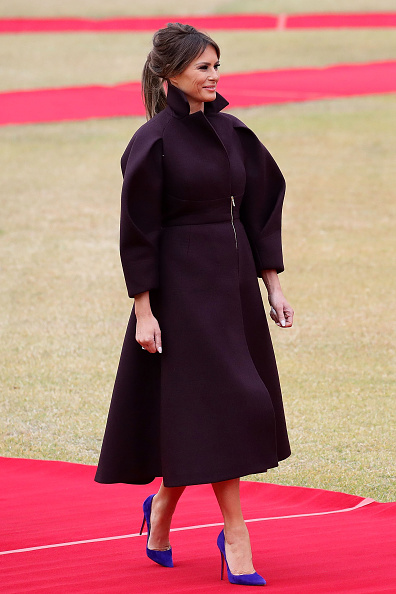 9. Marking the beginning of her husbands presidency, Ms. Trump wore a light blue suit and matching gloves by American designer Ralph Lauren to the inauguration on Jan. 20, 2017, according to Harpers Bazaar. 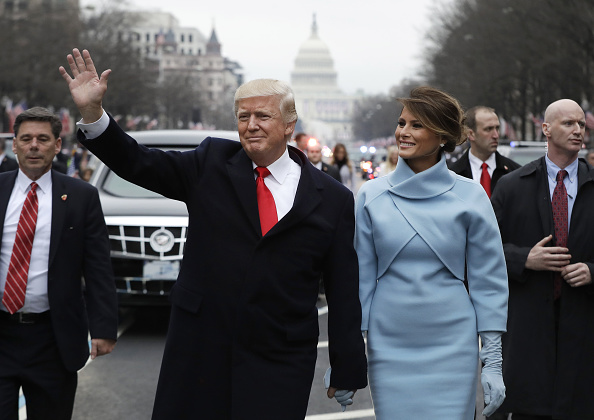 10. Last, but definitely not least, Melania Trump wore a beautiful white creme off-the-shoulder dress to the inauguration ball on Jan. 20, 2017. The gown was designed by her personal stylist Hervé Pierre.

“In addition to celebrating fashion, which is something I have loved since I was a small child, there is no better way to memorialize such a special evening and new chapter in the life of our family,” the first lady said during a ceremony where she donated her inauguration gown to the Smithsonian Institution on Oct. 20, 2017, USA Today reported. 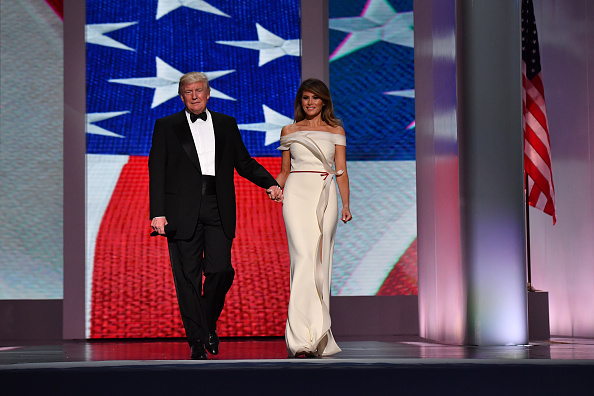 Melania Trump previously appeared in top fashion magazines such as Vogue, Harpers Bazaar Bulgaria, and the British GQ prior to becoming the first lady, according to fashionmodeldirectory.com.

admin - December 9, 2018
0
Ronald Prins slips into his seat at Bodega de Posthoorn — a restaurant the waiter describes as “the ..

UNRWA opens schools in Syria for over 51,000 Palestine refugee girls...