Fortnite developer Epic Games launched the games latest 5.3 update and patch notes this morning and whilst there was the usual array of Leaked 5.3 Skins, the expected Road Trip skin and a few surprises in terms of a Starter Pack and PlayStation Plus cosmetic, there was also one thing we didn't see coming.

It's a reskin effectively of the original TomatoHead skin released back in Season 4.

The new version now has a crown made out of cutlery, body and face paint, and in general, just looked a bit more rough around the edges.

Keep reading for details surrounding how you can get the new Tomatohead skin.

In order to get your hands on the new Tomatohead Crown skin you will first (obviously) need to own the original Tomatohead skin.

This should cost you 1500 V-Bucks, which is available in the shop right now, but likely won't be available forever.

Then you'll need to complete the following three challenges:

The clever chaps at Dexerto have also worked out *roughly* how many kills you need as well to complete the challenge above.

"With each kill worth 200 damage if an opponent has full health and shield, players will need to kill around 25 opponents to reach the damage requirement." 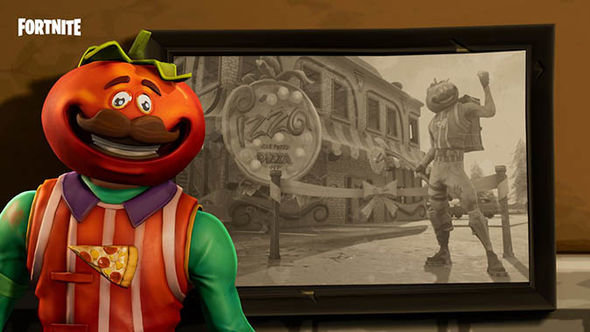 This release also coincides with a massive update to the map.

Now when you dive into the game (aside from the excellent Thank the drive meme) you'll notice that the map has changed slightly, with a new point of interest to explore.

Tomato Town has gone from the north-east of the map. Replaced instead by Tomato Temple. This takes the form of a jungle-like area with a big Mayan/Aztec looking temple n the middle – topped, majesticly, with the giant Tomato Head once lost to the rifts in Season 4.

You can take a closer look at the new area in the video above made by YouTuber Trevor 'TmarTn' Martin.

It's been rumoured for quite some time that the game would go 'back in time' and whilst this didn't happen in quite the way people imagined at the start of Season 5, with the introduction of the rifts, perhaps this is the beginning of said event.

"While time travel has played a big part in season 5, thanks to the Worlds Collide theme, many locations in Fortnite remain unchanged." noted the Daily Express.

So with the conclusion of Season 5 fast approaching and the rifts seemingly changing once again, it seems like something big is about to take place.

Perhaps something as big as what we saw with The visitor and that big rocket launch prior to the start of Season 5.

The new Tomato Temple could be just the first of many significant changes to the map. And it could be that locations swap with further points of interest replaced with other time periods such as the Wild West and ancient Egypt.

Only time will tell.

Black Ops 4 Xbox Alcatraz update: When will Call of Duty...