Fortnite's Summer Skirmish series has returned for its second week with a few notable changes due to community feedback from the Duos tournament played last week as part of the first Summer Skirmish event on the 14th.

This weekend's Summer Skirmish tournment will feature a huge $1 million prize pool and will be played over two days, with different competitors participating each day.

For those who don't know the Fortnite Summer Skirmish is an 8-week series of competitions with Epic Games awarding a massive total of $8 million in prize money across the events.

The competitions are invite only and feature a variety of YouTubers, popular pro players, and top performers from previous in-game events.

In order to avoid the same lag issues as last week, Epic Games have switch this week's event to public servers rather than private matches.

The plan is for players to queue into 10 solo matches, and the Summer Skirmish scoring will be based on Victory Royales and Eliminations from each match.

In short though, the player with the highest score after 10 Solo matches will be named the winner.

The top 20 players at the end of the Week 2 Summer Skirmish will be awarded prize money.

For those curious keep reading to see how scoring and prize money is worked out:

A quick look at the final standings from Week 2, day 1 of the Fortnite Summer Skirmish 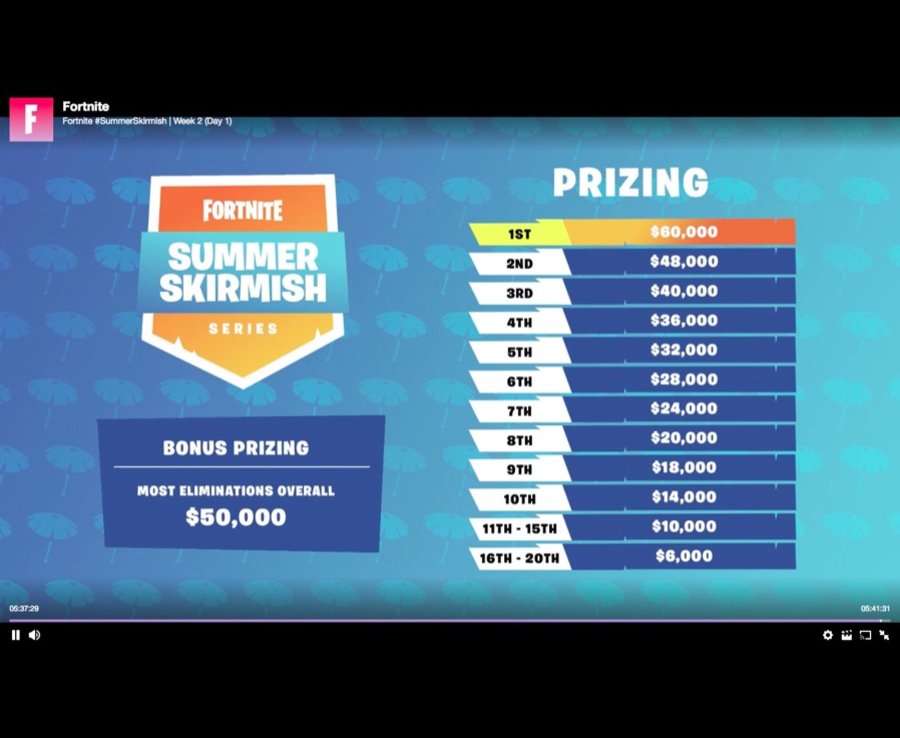 The player with the highest score after 10 Solo matches will be named the winner.

Victory Royales and Eliminations in this competition will be scored to determine placement at the end of the event.

The top 20 players at the end of the Summer Skirmish will be awarded. You can also check the top players here.

The July 20 Summer Skirmish tournament features a $500K prize pool. Below is the breakdown for how the prize money will be divided among the top 20 players.

ALSO – iDroPz_BoDiEs had the most eliminations (24) taking home the bonus 50k.

“Grab your gear, drop in and start training.

“Since the launch of Fortnite Battle Royale weve watched the passion for community competition grow and cant wait to empower you to battle with the best.

“Were getting behind competitive play in a big way, but our approach will be different – we plan to be more inclusive, and focused on the joy of playing and watching the game.”

Dealmaster: Get a Samsung T5 portable SSD for $128

Mariah Carey no longer ‘in denial’ over bipolar disorder

RIVA Arena REVIEW: Is this the BEST wireless multiroom speaker on the market?

This is the sweet moment Idris Elba proposed to his girlfriend...

admin - February 11, 2018
0
Idris Elba seems to have got into the Valentine’s Day spirit early and the sweet moment he proposed,..

Life lessons on the Sea Of Thieves – the first week...