HELSINKI — Jaana Partanen is not your typical AI programming geek.

Until a year ago, the 59-year-old dentist from the Finnish town of Mikkeli had no idea what to make of terms like “machine learning” or “neural networks.”

Now, Partanen spends her evenings learning the basics of coding and she is thinking about how to apply artificial intelligence to her job, either to help write up medical summaries or perform orthodontics.

“I can see it [artificial intelligence] is already here, and it serves us — very much actually,” she said, adding that following the latest developments in the field has become a hobby.

Shes one of tens of thousands of non-technology experts who are taking part in a grand experiment aimed at repurposing the countrys economy toward high-end applications of artificial intelligence. The idea has a simple, Nordic ring to it: Start by teaching 1 percent of the countrys population, or about 55,000 people, the basic concepts at the root of artificial technology, and gradually build on the number over the next few years.

“Well never have so much money that we will be the leader of artificial intelligence. But how we use it — thats something different” — Mika Lintilä, economy minister

Originally started as a free-access university course, Finlands “1 percent” AI scheme is now being rolled out nationally with the support of private companies and the government.

For Helsinki, there is also a clear economic incentive to training large numbers of Finns in the basics of AI: Doing so may allow Finland to stay competitive amid ever growing competition between China and the United States, and in the aftermath of the rapid decline of Nokia, the national mobile champion that has fallen on hard times.

As the two superpowers vie for technological supremacy, Finland knows its outclassed on raw resources. There is no point trying to compete with Beijing or Washington in terms of developing the basic technology of AI. So Finland aspires to occupy a niche, as world leader in practical applications of AI, according to Economy Minister Mika Lintilä.

“Well never have so much money that we will be the leader of artificial intelligence,” Lintilä said. “But how we use it — thats something different.”

Setting up the goalposts

Like many ideas in the liberal Nordic country, this one did not originate with government.

It started a short walk away from the economy ministry, in a modern building shared by the University of Helsinkis department of computer science and consulting agency Reaktor. Originally, it was meant as a promotional sideline to a free online course dubbed “Elements of AI.”

The university and the company decided to launch the course last May with the intention to “support democracy,” according to computer scientist Teemu Roos, the mind behind it.

Without requiring any coding skills, the class introduces the basics of artificial intelligence, but does not intend to train a new generation of cutting-edge developers. Instead, it wants to raise awareness about the opportunities and risks of AI among people who are strangers to computer science, so they can decide for themselves whats beneficial and where they want their government to invest.

“Thats how society works — if enough people say they dont like it, then we regulate it,” he said.

Roos said he came up with the idea in the summer of 2017, after hearing that the Finnish government was fishing around for help from institutions to develop “lifelong learning” — or professional training — material on AI.

Roos knew he would need help to make his material approachable for a general audience, so he teamed up with Reaktor. Together they purged his Introduction to AI course, which he had given to his computer science students for six years, of any elements that required programming and designed a slick website. 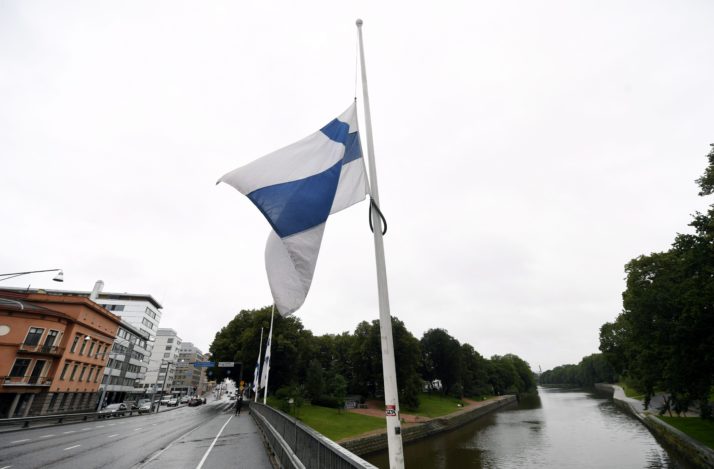 But the marketers at Reaktor were still worried that the course would stay unnoticed outside of expert circles, and so they came up with the idea to promote it by linking it to an ambitious goal: They convinced some of the countrys largest employers to join them, and announced that by the end of 2018, the course — coupled with other efforts of the industry — would lead to at least 1 percent of Finlands population being trained in AI.

Quickly, the initiative gathered pace. By mid-December, over 250 companies announced they would participate in the initiative dubbed “AI challenge.” Paper giant Stora Enso, for instance, pledged to train 1,000 of their employees in AI. Tech companies Elisa and Nokia said they would train their entire workforce.

“The companies participating in the challenge have pledged to train their staff in the basics of AI — with our course or with any material they see fit,” said Reaktors chief marketing officer, Ville Valtonen. 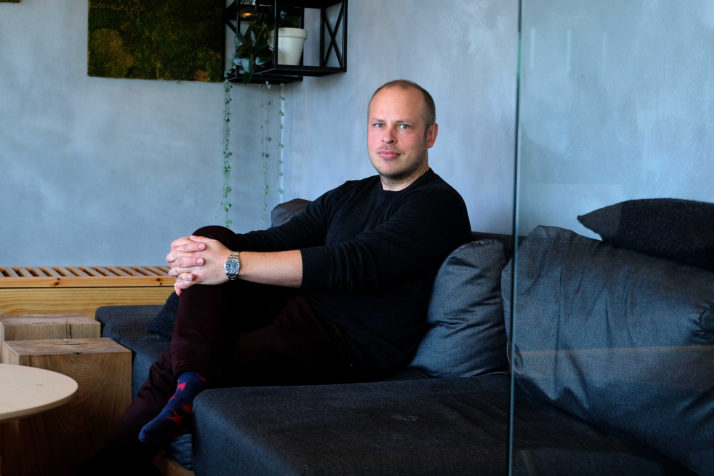 Ville Valtonen of consultancy Reaktor, at its office in Helsinki | Janosch Delcker/POLITICO

In addition to the companies separate efforts, more than 10,500 people — over 6,300 of them from Finland — had graduated from the course by mid-December, according to Reaktor.

As the initiative began to flourish, government officials took notice, and publicly embraced it. Finlands ministry of foreign affairs and the countrys tax authority both announced they would also train their staff — and when the first batches of students graduated from Elements of AI in September 2018, Finlands President Sauli Niinistö showed up at the ceremony. Among the graduates was dentist Partanen, who traveled over three hours on a bus to take part.

A Finnish language version of the course was launched in November. This, government officials hope, will boost the number of graduates from Finland even further.

Europes No. 1 laboratory for AI

The grassroots training scheme is just one element of a national plan to turn Helsinki into a leading voice on AI in the world.

In October 2017, Finland was the first EU country to put a national AI strategy into writing. In a second report released in June 2018, the government estimated that around 1 million of its population would eventually need to update their AI skills.

Helsinkis next and final strategy report, due to be published in April, will spell out how to bring small and mid-size enterprises across the country on board “who have no idea at this point that their future has to do with AI,” said Ilona Lundström, a director general at Finlands economy ministry and the key architect behind Helsinkis national plan for AI.

At the same time, Finland plans to partner up with bordering Estonia and Sweden to become Europes No. 1 “laboratory” for AI test trials, she said. And the country wants to use its voice in the European Union, where it is set to take over the council presidency this summer, to lobby for loosening some regulation.

“We are using AI as the flagship project for a bigger kind of setup of themes of digitalization” — Ilona Lundström, a director general at Finlands economy ministry

“The old churches used to have a person whos waking up everybody who is falling asleep while listening to the preacher,” Lundström said. “Our role is to have the stick and kind of poke people and tell them Stay alert, stay awake, be focused and get forward.”

Helsinkis plan includes pushing for “sandbox environments” to test AI technology across borders. The country is looking at experiments with neighbors to the west and the south, such as cross-border trials in autonomous shipping on the Baltic sea between Finnish or Swedish ports or an experiment to merge some of Finlands and Estonias digital infrastructure.

At the same time, the grassroots AI campaign at home is supposed to have effects that go far beyond artificial intelligence, officials said.

“We are using AI as the flagship project for a bigger kind of setup of themes of digitalization,” Lundström said. 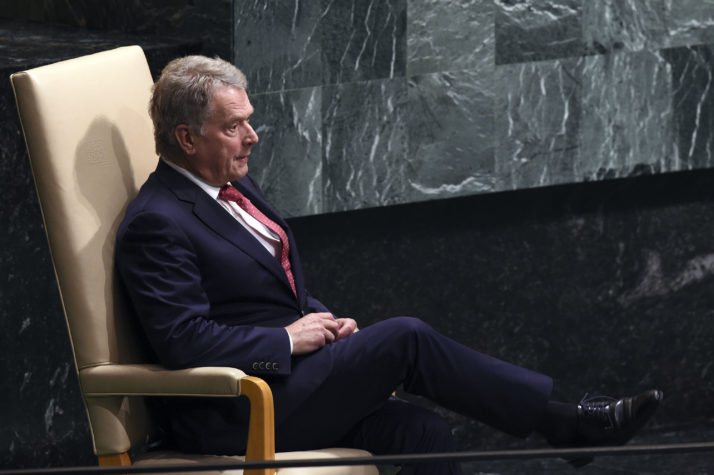 Finlands President Sauli Niinistö showed up at a ceremony for AI graduates in September 2018 | Bryan R. Smith/AFP via Getty Images

“If you talk about digitalization at large in the same manner, nothing happens. But if you take a special approach like artificial intelligence, things start to move.”

Thats been true for dentist Jaana Partanen in Mikkeli.

She has signed up for a course to learn the basics of coding in her hometown, “the first time theyre doing a public programming course here,” she said.

Computer scientist Roos team is working on an advanced sequel to the course, which will likely be launched early next summer and require some programming.

Read this next: Trumps Cabinet creating more hurdles for president

Effective ways to get rid of drowsiness while driving

Harvey Weinstein expected to turn himself in to NYPD

admin - May 25, 2018
0
Manhattan prosecutors will charge Weinstein with first- and third-degree rape in one case and first-..

admin - October 6, 2018
0
A security flaw in the U.K. Conservative Partys smartphone app exposed the phone numbers and other p..