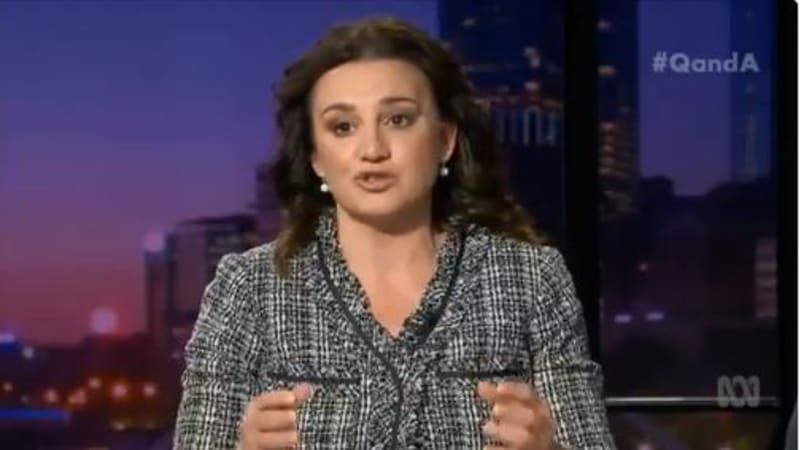 On Monday night, Q&A made us consider a tale of two politicians: Barnaby Joyce and Jacqui Lambie.

Both have occupied prime time commercial television space over the past two Sundays on Channel Seven. In the case of Lambie – now an ex-senator and therefore freed of some of the demands of dignity required in her previous job – it was a dating exercise, replete with a sex-toy party and other entertainments.

And to her credit, when the question of Joyces disastrous paid interview came up on Monday night, she fully owned whatever hypocrisy was about to follow. She then artfully let Barnaby have it with both barrels, while dressing up the takedown with an apparent show at empathy for him, as well as for we, the suffering viewer and voter.

"The Sunday night before they had me on… and then they had Barnaby. How much of us do you want on there?"

Then she delivered her trademark bullet. She began a sentence with the word: "look".

"I, my… Im going to be very brutally honest and I have been about this all the way through. I am worried about this, its beyond a mid-life crisis. This is not the Barnaby Joyce I know. I am concerned about his mental welfare, to be honest. I'm not going to sit here and kick [him] while he's down and out. Ill be brutally honest with you there."

Not wanting to kick Joyce while hes down, Lambie proceeded with another trademark move: she lost her own plot. And then kicked Barnaby while hes down.

"My heart is going out to both of them because theyre just not dealing with this very, very well. And unfortunately, when you're in politics if you haven't got someone on the outside that's giving you a boot up the rear end every now and then, you're stuck in your little bubble… it is very difficult.

"I don't find him and his excuse to say that we're away from home a lot as an excuse for what he did because I know soldiers and sailors and airmen out there who have done their fourth, fifth, sixth, seventh tour and have been away from their wives for most of five, six, 10 years. If you can't keep it in your pants you're going to pay the price. It's as simple as that and he's now paying the price for that."

Jacquis message to Barnaby? Im here for you, brother. But I think youre full of it. And you should have kept it in your pants.

Such is the state of modern politics. Lambie, like Joyce, is a curious case.

She manages to come across as simultaneously ridgy-didge and ridgy-dodgy – undeniably a great retail politician, managing to end every other sentence with "Ill be completely honest with you", with the occasional "bloody" thrown in for good measure. And she always maintains the element of surprise – as on Monday night, when she cast herself as the friend of the working man, of the gay man suffering bigotry in the bush and of the sexual abuse victim who should be making the church "pay for it sins".

How much of it she actually means is another question, but she can be irresistible in her execution of the schtick. It can be hard to make your way from one end of a sentence to the other, but it mostly works.

Its the same kind of political vaudeville that took Joyce – a one-time banker and accountant – to the pinnacle of political power, swanning around the land as the friend of the farmer, fashionably attired in an Akubra hat.

Lambie may be out of political office for now, but you wouldnt count her out for a comeback.

She may well be the natural heir to Joyce's political audience. To borrow from Gough Whitlam, he was once just a humble country member.

Of course we remember, but whether we learn from our mistake is another question.

You Wont Believe How Intoxicated This Superstar Rapper Was When He...

Regis Philbin embodied the fading art of being a ‘master communicator’

‘Once Upon a Time … in Hollywood’ is Quentin Tarantino’s valentine...

admin - July 25, 2019
0
For those well-versed in the writer-director's work, it's a credible and intriguing additi..