"PG&E as we know it may or may not be able to figure this out. If they cannot, we are not going to sit around and be passive," Newsom said. "If Pacific Gas and Electric is unable to secure its own fate and future … then the state will prepare itself as backup for a scenario where we do that job for them."The Northern California utility, which has come under fire recently for cutting power to thousands of people as part of its plan to prevent wildfires,filed for bankruptcy protection in Januarywhile facing billions of dollars in claims tied to deadly fires. Newsom said that his office aims to get the company out of bankruptcy by June 30, 2020 by first working on a plan with PG&E and other stakeholders. "We want to bring everyone together, we want to broker a deal. It's what we do," he said. But if an agreement isn't reached, he said, the state could step in."PG&E as we know it cannot persist and continue," the governor said, adding that the company has to be "completely transformed, culturally transformed, operationally transformed with a safety culture first and foremost as part of that fundamental transformation."PG&E has been criticized recently for a practice known as Public Safety Preventative Shutoffs (PSPS), which intentionally cuts electricity to avoid causing fires during high winds and dry conditions. The utility giant cut power to thousands of customers on multiple dates in October as California faced strong winds that PG&E said posed wildfire threats. The utility's equipment has been blamed for starting deadly wildfires in the state in the past and the company has filed reports saying that its equipment may again be linked to at least three of the more than a dozen fires of the past week.
Newsom has been among the critics of thepreemptive shutoffs."We cannot afford the kind of PSPSes we've experienced over the course of the last week. We had people out in some circumstances for one full week without power," Newsom said. "You gotta consider the life impacts of these power cutoffs." 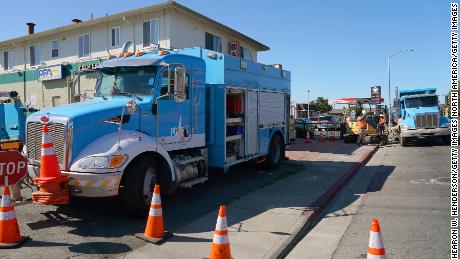 After an October 9 shutoff, Newsom demanded that PG&E "be held accountable" and provide rebates or credits after leaving thousands in the dark and some customers without power for days."Californians should not pay the price for decades of PG&E's greed and neglect," Newsom said in a news release. "PG&E's mismanagement of the power shutoffs experienced last week was unacceptable."The city of San Jose said the shutoff had cost it at least half a million dollars.On Tuesday, PG&E said in a news release that it will give a one-time credit of $100 to residential customers and $250 Read More – Source

Americas Most Prolific Serial Killer May Be Sitting In A Texas Cell. Heres What...

Snap to stop promoting Trumps account because of threats against protesters

admin - October 4, 2019
0
Sylvie Goulard used to be a member of the European Parliament but that doesnt mean her confirmation ..

Martha MacCallum Challenges Senator Coons On Burden Of Proof — She...