"I couldn't be better," he says over the phone, with an enthusiasm that displays how true his statement is. "Honestly, the last minute has been especially great. The last, last minute of my life has been just fantastic. So it's just incredible."He declines to share more about those very important, very exciting-seeming 60 seconds of his life when prompted. He says he's not at liberty to say more, out of respect for the privacy of his friends.But Nelson has had a lot to be thrilled about these days.Ever since Bradley Cooper saw Nelson and his band, Promise of the Real, performing with Neil Young at 2016's Desert Trip, Nelson has been in a whirlwind of good fortune. The latest chapter being last week's release of "A Star Is Born," a film for which Nelson helped write songs and coached Cooper, who plays a grizzled rock star named Jackson Maine in the film. (Nelson and his band appear as Maine's band, too.) Nelson was there as Cooper went through different "iterations" of his character, eventually landing on the wounded showman who ended up on screen. There's a little bit of Neil Young in Jackson Maine, and a little bit of Nelson. ("I think he took a few mannerisms from me, frankly," he says, almost trying to not sound vain.) Rave early reviews for "A Star Is Born" — accompanied by a trail of Oscar buzz — helped propel the film to an impressive opening weekend and its soundtrack, on which Nelson has credits for songs like "Out of Time" and "Music to My Eyes," is a chart-topper."That was like the highlight of my life at that point," Nelson says of being singled out by Cooper from an all-star lineup at what he lovingly refers to as "Oldchella." "And then, you know, another sort of highlight was born from that." Before that, life hadn't been too shabby either, Nelson said. He and his band, who've been together for more than a decade, have been on the road with his dad, Willie Nelson, and Young. "This has been happening the last few years and it's just been a magical sort of dream ride for me and the band," he said. "It's just been incredible."Nelson's family, including his dad, were among those who rushed out to see the film after it's release. After they went as a group, they called him "and said everybody was crying," Nelson says. That is not an uncommon affect for "A Star Is Born" to have on people. The story, starring Cooper and Lady Gaga, is part romance, part family drama, part cautionary tale. The 29-year-old related to some aspects of the tale more than others, but recognized and appreciated the truth of the story as a whole. "There are a lot of trap doors you can fall into when you get to that level of fame," Nelson says. "There's a lot of energy flying at you at all times and you have to be really strong in order to keep your center throughout." He adds: "To me it really showcases the struggle to sort of stay grounded, stay who you are, have something to say and be an entertainer in a world that just kind of eats people up within that — that would eat you up if you're not careful." Nelson speaks like a guy who would fight — and perhaps has fought — like hell not to get eaten. He says he did a lot of reading while growing up and has studied "all different types of spiritualities." He also meditates, does yoga and has a deep passion for learning. "I think that if you stopped growing and learning in life, then you might as well die," he says. "I'm never gonna stop learning about the world around me in all different ways, and I think that keeps me grounded because if you're always a student, then you can never be mistake yourself for a master and then get of caught up in the ego of things." 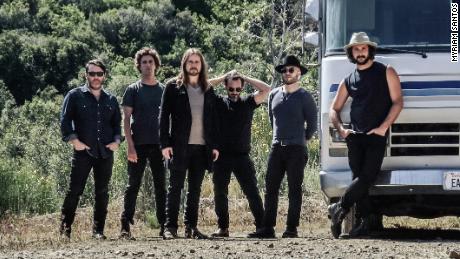 Growing up the son of a music legend, Nelson has been around fame his whole life. This, he says, helps him see famous people — even the Coopers and Lady Gagas of the world — in a different light than most. "Ultimately the only thing that [brings] successful entertainers together is just complete dedication and hard work and focus — focus on their craft," he says. "So to put someone on a pedestal as being more than life — larger than life — is a mistake when you're hanging out with them because then people feel like they have a pressure to sort of be someone that they're not when they're with you. Most people just want to be able to relax and not have to talk about themselves."Through the end of the year, Nelson and his band have tour dates taking them everywhere from Los Angeles — for a big show as part of the Outlaw Music Festival tour — to Florida and Texas.They're ready, however, to perform music from the movie for a crowd should their talents be needed as award season ramps up. "I've let the Bradley and Warner Bros. know the band was ready to do whatever we need to do, if we need to do it," he said. Cooper has been more tepid on the idea of resurrecting Jackson Maine for a live audience, I tell him. "Well, I'll put in a good word, let's just say that," he says.

Seth Meyers Condemns Conservatives Who Blame Both Sides For Political Climate: Only The Right...

Harvard professor in 1800s had photos taken of slaves. Now his...

admin - June 21, 2019
0
Forty-three direct descendants of Prof. Louis Agassiz signed a letter in support of the family of th..

Joe Biden accuses Trump of throwing gasoline on the fire ahead...

Germanys Altmaier taken to hospital after fall at digital conference