Authorities initially thought Emantic Fitzgerald Bradford Jr., known as E.J., had fired the rounds at the Riverchase Galleria in Hoover, south of Birmingham, that left an 18-year-old and a 12-year-old hospitalized, Hoover police spokesman Capt. Gregg Rector said in a statement. At first, police said Bradford opened fire after an altercation with the 18-year-old and an officer fatally shot him as he fled the scene. But late Friday, police changed that story, saying that while Bradford was involved in "some aspect of the altercation" and was armed with a handgun, he likely did not fire the rounds that injured the two others. "We regret that our initial media release was not totally accurate, but new evidence indicates that it was not," Rector said.

The new information emerged after Jefferson County Sheriff's Office investigators and crime scene experts spoke to witnesses and examined evidence, police said."Investigators now believe that more than two individuals were involved in the initial altercation," Rector said. "This information indicates that there is at least one gunman still at large."Police provided no name or description of the gunman at large.The officer involved in the shooting is on administrative leave pending an investigation, police said.Bradford's family released this statement Saturday afternoon:"Our family is completely shocked, heartbroken and devastated at the tragic death of our beloved 'EJ.' EJ was a devoted son and brother, who dedicated his life to serving his country and always doing the right thing. As we continue to grieve, rest assured, that we are working diligently with our legal team to determine exactly what happened and why this police officer killed our son. We will never forget EJ, and ask for your continued prayers during this incredibly difficult time."Members of the Bradford family have retained civil rights attorney Benjamin L. Crump, according to a release from the law firm. 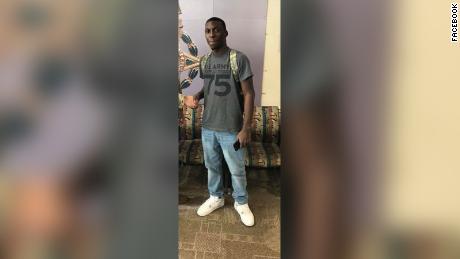 The Jefferson County district attorney informed Hoover police Friday that the Alabama Law Enforcement Agency will take over the lead role in the shooting investigation from the county sheriff's office, Rector said. Hoover police will "assist and cooperate fully" in that inquiry and will "conduct an internal but separate investigation" of the officer-involved shooting, he said. That police would so quickly rescind their account of an officer having killed a shooter is unusual, CNN senior law enforcement analyst Tom Fuentes said Saturday. But because new information pointed to a gunman on the loose, they had to do so "for the public's sake," he said.The initial report, Fuentes said, reflects the "pressure on police and authorities when there's an officer-involved shooting to get out as much information as quickly as they can, even if it involves some kind of speculation or they're jumping to a conclusion."

Protesters demand justice outside the mall

Several dozen demonstrators, including women who described themselves as Bradford's relatives, gathered early Saturday afternoon outside the mall to demand justice, footage from CNN affiliate WVTM showed. Holding signs reading, "Justice for E.J." and "Black Lives Matter," they likened Bradford's case to those of other black Americans shot dead by police in high-profile incidents, including Walter Scott, who was killed in North Charleston, South Carolina, in 2015. 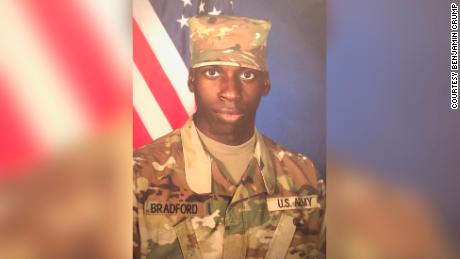 "No justice, no peace," they shouted as they walked slowly around the shopping center before entering it. "No racist police." One demonstrator drew attention to officers along the protest's perimeter, blaming them for the fatal shooting of Bradford, then called for the arrest of the officer who shot the 21-year-old.More than one speaker referred to Bradford's military service. But while Bradford noted on his Facebook page that he was a US Army combat engineer, he never completed Advanced Individual Training and did not serve in the Army, Lt. Col. Manny Ortiz, an Army spokesman, told CNN.

'Freaking out', then escaping

The shooting at Alabama's largest enclosed mall happened shortly before 10 p.m. (11 p.m. ET) Thursday.Police do not know how the confrontation began but don't believe the 18-year-old who was hurt was armed, they said. A gunman opened fire, shooting the teenager twice in the torso, according to police.An armed Hoover police officer who was working security at the mall then confronted an armed man running away from the scene and fatally shot him, authorities said. A 12-year-old girl described by police as a bystander was shot once, but it's unclear by whom, Rector said. Both of the injured were taken to hospitals.Witnesses described chaotic scenes when gunshots rang out, with customers screaming and staff working to help people flee or hide. "They (put) us in supply closets and locked the doors. And then we sat there for five to 10 minutes, all freaking out," Lexie Joyner told CNN affiliate WBRC. "And then they opened the escape-route doors, and we escaped."

Is Border Patrol work dangerous? Not compared to being a cop

Chris Watts case: What we learned from unsealed affidavit

Grab one of our favorite budget gaming headsets for $30 today