"We are the children, the mighty mighty children. Here to tell you, Black lives matter!" hundreds of children chanted as they marched down neighborhood sidewalks in Kirkwood with their parents on Saturday. Their voices might not have been as deep or statures as tall as other protesters, but their passion and energy were just as strong, thanks to the leadership of 8-year-old Nolan Davis, who organized the march. "I'm worried about Black people, like me, getting hurt. Some skin is like chocolate. Some is like vanilla. Some is mixed together like mine. But we're all people," Nolan Davis said through a megaphone at the start of Saturday's event. "Even though I'm a kid, it's important to speak my voice so people can hear me and know they can share their voice too, just like me." Nolan Davis got the idea to start his own protest after he and his mother went to a couple of other ones in the area. "Right after that, he asked me if he could have his own march so that he could let other people's voices be heard," his mother, Kristin Davis, told CNN. So the two created a flyer for their "Children's Black Lives Matter March" and shared it to Facebook, asking families to meet at Kirkwood Park. 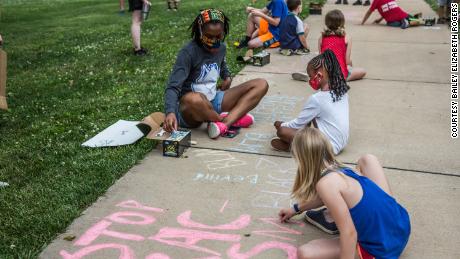 "We thought that maybe 50 people would be there," Nolan Davis said. "But there were like 700 people." Children of different races covered the sidewalks in chalk with phrases such as "Stop Racism" and "Be Kind to Everyone." They marched with posters in their hands that read among other things "Black Children's Futures Matter." Nolan Davis led the way with his poster that read, "Kids can make a change."

He's just 8 years old, but he's already had the "talk"

Despite being a child in elementary school, Nolan Davis has already been taught the ways he needs to act differently in society compared to his White friends, such as playing with water guns only in the backyard "because you don't want it to get mistaken for something else" or keeping the hood of his hoodie down, according to Kristin Davis. As his White, adoptive mother, Kristin Davis Read More – Source

Authentic upsets Tiz the Law to win the Kentucky Derby

admin - September 6, 2020
0
Authentic, an 8-1 favorite to win the Derby, was trained by Bob Baffert, who trained American Pharoa..