This is Vava, a 4K definition Ultra Short Throw (UST) home theater projector retailing for $2,700. For those of you not familiar with the term, UST refers to "throw distance"—the amount of space you need between a projector and screen in order to get the desired image size. This projector also features a built-in Harman-Kardon speaker, motion sensors to keep you from blinding yourself by staring into the laser, and plenty of inputs.

A few weeks ago, we reviewed Cinemood, a miniature and fairly low-cost portable projector that unfortunately did not really impress us. Vava is the projector we thought we were getting then, and we're happy to report that it impressed us a lot.

Setting Vava up was a refreshingly straightforward process. Press the power button, and the system turns on and begins walking you through what little setup it needs or wants—select a source (with PiP to show you what's on each source!), connect to your Wi-Fi, and so forth. We were very happy with Vava's on-screen keyboard, which is laid out well and wraps in all four directions. You can "type" a Q and an L with only a couple of button presses on the remote rather than laboriously arrowing over each virtual "key" across the width of the board.

We also accidentally discovered a pretty cool safety feature. While scooting Vava around on the floor on its cardboard box, getting the display size just right, the image cut out and a dim "do not stare into beam" warning came up in its place. Turns out that Vava has a motion sensor in it. We already knew better and were carefully looking away while anywhere near the beam, but it's great to know that cats, kids, or particularly dense roommates are unlikely to blind themselves. (Ralphie from A Christmas Story will need to stick to his Red Ryder BB Gun, because Vava refuses to shoot his eye out.)

This wasn't our first spin with UST projectors; we were familiar with the term from our time with the much smaller Puppy Cube last year. Vava is the first serious home theater UST gear we've seen, though, and it's worth taking a little time to lay out its pros and cons.

The great thing about UST is that you don't need ceiling mounts or long, unobstructed distances to put enormous images up on a wall or projection screen. In the (very) large meeting room at St. John's Episcopal Church where we initially tested Vava, there's a 136" screen with a ceiling-mounted traditional projector about 12' away. Vava was able to fill the same screen from roughly a single foot away, sitting on its own cardboard box on the floor.

There is, unfortunately, a downside—the projection screen isn't completely stiff, and gentle air currents from the HVAC system were enough to cause equally gentle undulating ripples in the screen itself. The effect isn't something we'd ever noticed when using the room's traditional projector, with a much closer to head-on display angle. But with Vava and the extreme display angle necessary to achieve its ultra short throw distance, the ripples were much more noticeable.

During normal video, you might or might not spot the effect, but when setting up the system (or doing anything else involving what should be bold, straight lines) it's obvious. This isn't really Vava's fault, and any UST projector will have the same issues if its screen isn't completely flat—we made sure of that by doing another test projection against the wall to the right of the screen. Vava's image was perfectly straight and rectangular on the wall. It was also surprisingly clear and bright, given that all of the room lights were up—including copious and harsh overhead fluorescents—and the walls are a dark taupe, not white! 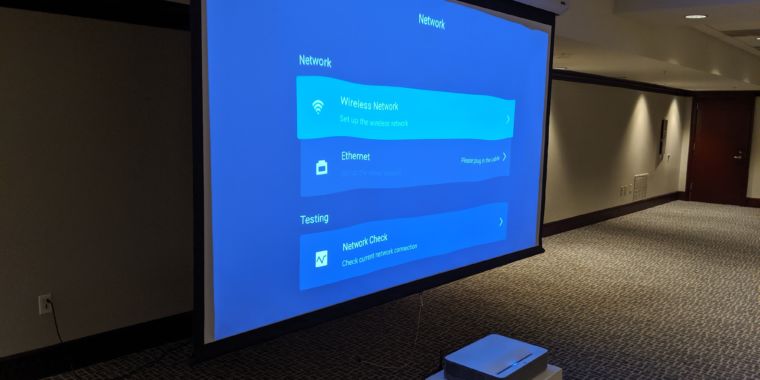 We weren't expecting this, but in addition to the usual array of HDMI and composite inputs and outputs, Vava has a Wi-Fi adapter and an app store. This is a project that can display content all by itself.

Unfortunately, most of the apps available are weird streaming things you've never heard of—pages on pages of things with names like "CumulusTV" and "GoldTV" and even "IPTV Smarters Pro." Enough patient scrolling eventually brings you to the YouTube app and two different kinds of Netflix app—the official one, and a workaround version that just encapsulates the Netflix website itself. We used the YouTube app for an hour or so and, aside from the need to fumble with an onscreen keyboard and remote control when searching for videos, it was fine. Neither of the Netflix apps worked at all, unfortunately. If you want Netflix, you'll need to connect your Vava to a different source, such as a Roku, Fire Stick, or even a laptop.

Turn down the lights and get serious

Report: Aaron Carter Wants To Open Up About Personal Experience With Michael Jackson

How you can see which companies found you on Facebook

Russia ‘threatens our ability to dominate’ – US general to Congress

One Of The Worlds Most Popular Websites Went Down For About...

Father of at least 17 kids sues fertility clinic, says he...