"Ty is our tomato guy," said Nona Yehia, co-founder and CEO of Vertical Harvest, an innovative three-story greenhouse in downtown Jackson, Wyoming. As she watched the slender 6'5" Warner carefully weave his way through a towering canopy of plants, pulling ripe tomatoes hanging above, Yehia smiled with pride. "Ty is good at every part of growing tomato plants. It is really impressive." Operating an indoor farm in the snowy northwest corner of Wyoming wasn't exactly the job Yehia had envisioned for herself years ago. In 2008, after the New York City-based architect moved to Jackson to start a new firm, Yehia wanted to try something innovative in her new community. "We really wanted to address the local sustainable source of food," she said.

The idea to go up

Jackson sits at an elevation just over 6,000 feet, nestled between Grand Teton National Park, Yellowstone National Park, and the Teton National Forest, and its location means there is very little space and conducive weather for farmers to grow fresh produce for the bustling tourist town. "We came together to look for an out-of-the-box solution and that's where the idea to go up came from," Yehia said. "Up" was on a 1/10 of an acre lot abutting an existing parking garage. In the spring of 2016, Vertical Harvest began growing its first lettuce, microgreens, and tomato plants. The farm's current staff of 40 now grows year-round, and cultivates the amount of produce equivalent to ten acres of traditional outdoor farming. Yehia says all of the produce grown is distributed to 40 local restaurants and four grocery stores. "Nona has approached it as bringing something unique to chefs that they then can use and feature all year round," said Ben Westenburg, the executive chef and partner of Persephone West Bank in nearby Wilson, Wyoming. "It's just so easy to call up Vertical Harvest and be like, 'I need some salad greens and tomatoes and some really beautiful micro greens.' And they're like, 'Okay, we'll be there tomorrow.'" 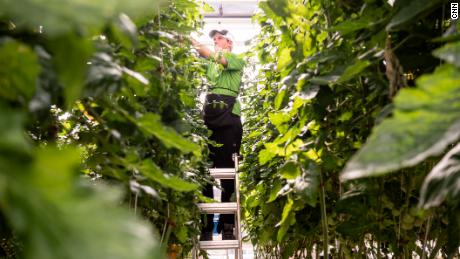 While planning for a new greenhouse, Yehia and her design team realized they had to do more with the project than just grow fresh greens for locals. "There was a bigger problem," Yehia said. "People with physical and intellectual disabilities in our town who wanted to work, who wanted to find consistent and meaningful work, were not able to do so. We're pairing innovation with an under-served population and really creating a sea change of perception of what this population is able to do." Half of Vertical Harvest's workers have physical or intellectual disabilities. Yehia, whose older brother is disabled, says every single employee, including Warner — who is autistic — is critical to keeping Vertical Harvest functioning. "We can empower the most under-served in our communities just by giving them a chance and giving them something to be able to give back to," Yehia explained. "It's hard for people with disabilities to find a job," says Sean Stone, who used to wash dishes at several restaurants in town before joining Vertical Harvest as a farmer. "I'm glad to help thRead More – Source

admin - December 10, 2018
0
With calls to ban milkshakes, is an obsession with public health harmful to our personal wellbeing? ..

‘News directly from the CIA’: Ex-director Brennan hired by NBC

Giuliani: Manafort Has Not Incriminated Trump In Interviews With Mueller